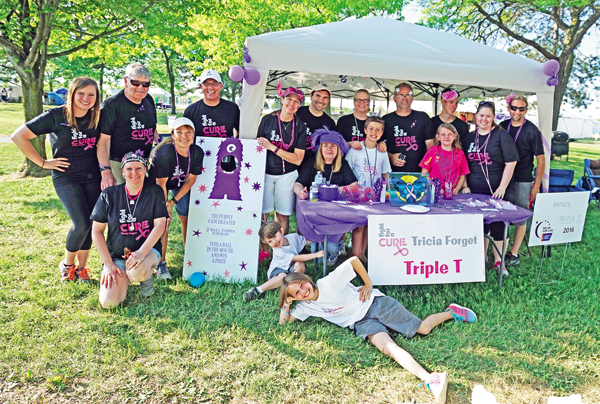 Tricia Forget, the 2016 Relay For Life honorary survivor, poses for a photo with members of Triple Team T. (Photo by Kevin and Dawn Cobello, K&D Action Photo and Aerial Imaging)

Fri, Jun 2nd 2017 03:35 pm
Help make a difference at Relay For Life
By Terry Duffy
Editor-in-Chief
The 2017 edition of the Relay For Life of Greater Niagara takes place today, starting at noon and continuing to midnight at Reservoir State Park bordering the towns of Niagara and Lewiston.
A true community event, the Greater Niagara Relay, which has evolved from separate Relays held in past years on the Lewiston-Porter campus and in Niagara Falls, reflects the diversity of individuals from Niagara County and beyond. Participants range from area school districts such as Team Lewiston-Porter, to employees of local companies such as Guard Corp., to a number of groups and individuals.
"This is our 20th year in the Greater Niagara area," organizer Cheryl Martin said. "The event started at Lewiston-Porter and a Niagara Falls event was added a few years later. About four years ago, the two events merged back together at Reservoir Park to create one large event on the western side of the county."
She reports the Relay kicks off with the opening ceremony, where all survivors in attendance will be honored. Survivors who wish to participate can check-in starting at 11:30 a.m. All will be provided a T-shirt and some gifts. Gallo Coal Fire Kitchen of Lewiston will also treat survivors to a catered lunch.
Cancer survivors will lead the event by walking the first lap. Honorary Survivor for this year's event is Chris Guard of the Guard Corp.
"The event leaders team chose Chris because he is a 25-year survivor and has been involved in our local Relay event for all 20 years," Martin said. "He has been a great supporter corporately and he understands the importance of this event for fundraising, awareness, and as a support group for others going through the cancer battle."
Martin pointed out Guard Corp., in its fleet of more than 350 Dumpsters, includes six special charity cans. Three bear the color purple and three are pink.
"Every time one of these special cans is rented, $30 is donated to the American Cancer Society (purple cans) and Roswell Park Cancer Institute (pink cans)," she said.
Additionally, "Our honorary Caregiver is Rhonda Hands, someone that has also been involved with our Relay event since the inception," Martin said.
American Cancer Society organizers report that, as of Thursday, 24 teams and 161 individuals have signed up to participate in this year's Relay, with $37,115.20 raised toward a 2017 goal of $55,000.
Martin welcomed the community to participate.
"We like to remind people - It's not a run, marathon or a 5K. It is more of a carnival atmosphere where we raise money and support those that have battled cancer."
This year's scheduled Relay activities also include a frozen T-shirt contest from 1:30-2 p.m.; Amy Teal and Lewiston-Porter vocal students performing from 2-3 p.m.; and the caregiver ceremony from 3-3:30 p.m.
Still more activities include: 3:30-5 p.m. - band performance by No Vacancy; 4 p.m. - haircuts for "Pantene Beautiful Lengths"; 5-6 p.m. - Performance by James Kibby; 6-6:15 p.m. - the "Fight Back" ceremony; and 6:15-9 p.m. - performances by the McCarthy School of Irish Dance, the Time to Dance Studio and Your Forte.
A large basket auction will also be part of the Relay activities, with a "last call" taking place at 6:15 p.m., and winners posted at 7:30 p.m. The symbolic Luminaria ceremony, honoring those lives lost to cancer, will run from 9:15-10:15 p.m.
"At 9:30, we have a Luminaria ceremony where we light the path with luminaria bags purchased 'in honor' or 'in memory' of those that have battled cancer," Martin said. "This is a very moving ceremony where we remember those that have finished their earthly battle with cancer."
Closing ceremonies take place at midnight.
Martin noted Relay For Life recognizes all who have been affected by cancer - the survivors and also those who lend endless support in a very difficult time.
"We do a ceremony where we honor our caregivers in attendance. We understand that the caregiver has a difficult job, too," she said. "It is difficult to watch your loved one struggle.
Relay For Life is co-chaired by Jason Przepiora and Steve Perrillo. Event supporters include the Town of Niagara (Signature Sponsor), Modern Corp., Radiology Solutions Associates PLLC, ARRIC, Ensol Inc., The Environmental Service Group, Guard Contracting Corp. and Heatwave Heating and Cooling.
Martin said she welcomes all residents from throughout Lewiston-Niagara to be part of this special community event and help make a difference.
"The event is free to the public and we invite you to come out, whether you can stay for an hour or spend the whole day with us," she said. "There is a lot going on and it is all to benefit the American Cancer Society and the patient services and research.
"I'm sure that there is so much more to say regarding this event, but the bottom line is that it is hard to describe Relay For Life in words. It is a feeling and something you need to experience!"
For more on this year's Relay for Life of Greater Niagara, visit its Facebook page.
Categories
NFP Sentinel Sentinel feature