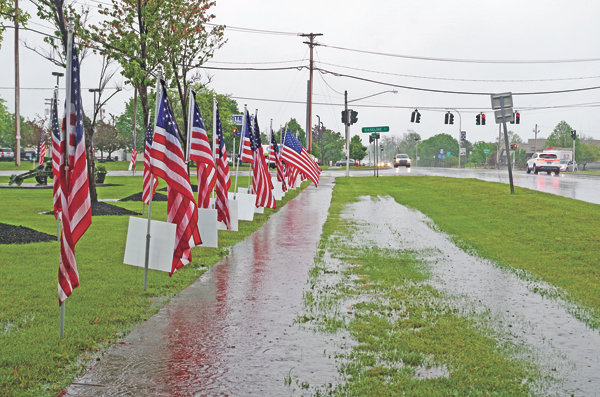 Thursday's lengthy showers flood the sidewalks at DeGlopper Park at the intersection of Baseline Road and Grand Island Boulevard, where the town holds its annual Memorial Day service. (Photo by Larry Austin)

Sat, May 27th 2017 06:00 am
Joseph A. Menter, recreation supervisor for the Town of Grand Island, reports that the weather forecast for Memorial Day may prompt the town to move the annual ceremony in DeGlopper Park to a new location.
Town of Grand Island Memorial Day services will be conducted at 10 a.m. Monday, May 29, in DeGlopper Memorial Park, at the intersection of Grand Island Boulevard and Baseline Road. In case of rain, the ceremony would move to the Pfc. Charles N. DeGlopper Memorial Veterans of Foreign Wars Post No. 9249, 2121 Grand Island Blvd.
The weather for Monday "looks iffy," Menter said Thursday. "It is back and forth between rain and no rain. The band cannot play in the rain, so if it is raining the ceremonies will be moved to the VFW under the pavilion."
Menter said the decision on moving the ceremony will be made on Monday morning. If the ceremony is moved, the recreation staff will post signs at DeGlopper Park to notify the public.
"This has only happened once that I know of," Menter said of the weather moving the ceremony. "We had a plan in place three years ago but thankfully did not have to use it. Hopefully that is the case this year." 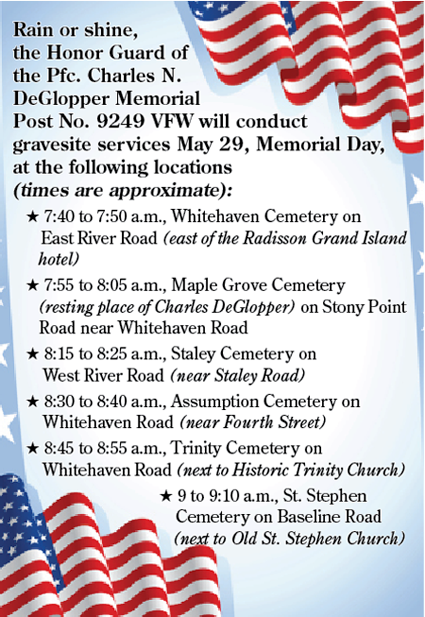