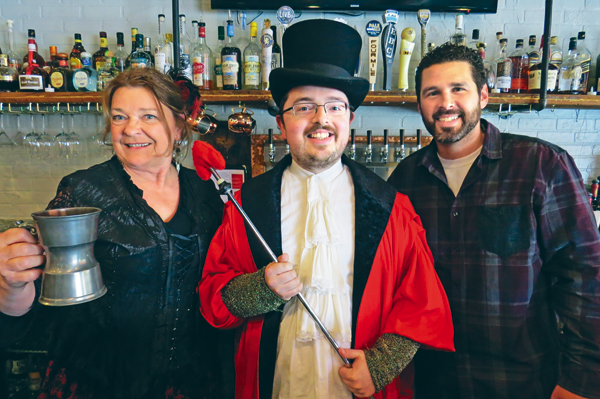 Pictured, from left, are Catherine Hustler (aka Kathryn Serianni) of the Lewiston Council on the Arts, Joshua Maloni of The Sentinel, and Michael Hibbard of Gallo Coal Fire Kitchen.

A Taste of Lewiston on display at festival

by jmaloni
Sat, May 20th 2017 09:00 am
The Lewiston Council on the Arts and Corey McGowan Productions have teamed up to bring back A Taste of Lewiston. The grand return of the popular festival - after a 10-year hiatus - will take place from noon until 8 p.m. Saturday, May 27, along Center Street. Almost all of Lewiston's restaurants and businesses will take "center stage" in the historic village.
"There is no better way to experience the soul of a destination than through its food," LCA Artistic Director Eva Nicklas said. "You're invited to discover the delicious, creative and award-winning cuisine that makes Lewiston one of the most widely recognized destinations for foodies in Western New York. If your mouth is watering for some scrumptious food and you don't feel like cooking, then you're in luck!"
The festival was brought back when McGowan approached the LCA. Having already found success with the Taste of Niagara Falls, Taste of Grand Island and Gus Macker 3-on-3 Basketball Tournament, he decided Lewiston would be the site of his next production.
"Ever since I started doing these 'Tastes,' Taste of Lewiston is something I've heard about," McGowan said. "They did this probably when I was 11, 12, 13 years old, so it wasn't something I was familiar with at the time, but still to this day people talk about Taste of Lewiston.
"I made a point of it last year to reach out to the group that used to do it, the Lewiston Council on the Arts, to see if it was something that they wanted to partner up and revise."
At a Village of Lewiston Board meeting, where the idea was first unveiled, Nicklas said, "He approached us a couple of months ago, and we have gone to his events, which are very well organized, very well promoted, and we love his energy and work ethic. ...
"We would consider doing it, because we would have Corey McGowan working with us and doing the so-called heavy lifting."
McGowan said he's "super familiar" with Lewiston's eateries.
"They are some of the staple restaurants in Western New York. Dynamite cuisine. It's something that, if you haven't been to Lewiston before, this is your chance to come discover some of these fine cuisine places."
A Taste of Lewiston participating restaurants include: 700 Bistro & Café, Apple Granny Restaurant, The Brickyard Pub & B.B.Q., The Brickyard Brewing Co., Carmelo's Coat of Arms, Casa Antica, Center Cut: The Village Steakhouse, DiCamillo Bakery, Favorite's Pizza, Flight of Five Winery, Freedom Run Winery, Gallo Coal Fire Kitchen, Lakeland Winery, Longcliff Winery, The Winery at Marjim Manor, Midnight Run Wineries, Spice Harbor, The Spicey Pickle, Sweet Melody's, Tin Pan Alley, Victorianbourg Winery, The Village Bake Shoppe and Water Street Landing.
Unlike years past, where a panel of judges decided whose cuisine reigned supreme, McGowan said voting will be done digitally in 2017.
"You'll be able to do it right from your mobile device," he said. "At each ticket tent, they'll be signage that says 'Text to vote.' So, you text 474747, best restaurant, and then the name of the restaurant. Best food, appetizer, then the name of the restaurant."
He said the categories will be online ahead of time at www.coreymcgowan.com. McGowan said he would post an event layout and restaurant offerings, too.
In addition to food, the LCA is teaming with Gallo Coal Fire Kitchen to create the "Morgan Mule" cocktail, which will be served in front of the Frontier House.
"Legend has it that Catherine Hustler, owner of Hustler's Tavern - located at the current site of the Gallo Coal Fire Kitchen - plucked a rooster tail feather, stirred up a drink and thus the 'cocktail' was invented," Nicklas said. "Catherine and her costumed friends from the Marble Orchard Players will be serving up a taste of what's sure to become Lewiston's signature cocktail."
All food and beverages can be purchased with tickets, which will be sold in three convenient locations at the festival.
As the event is a taste of all things Lewiston, more than 20 Lewiston business establishments will showcase their products and services.
Finally, The Sentinel's own Joshua Maloni was named "King of the Taste of Lewiston" and, along with Catherine Hustler (Kathryn Serianni), will be on site to take pictures and meet festival attendees. 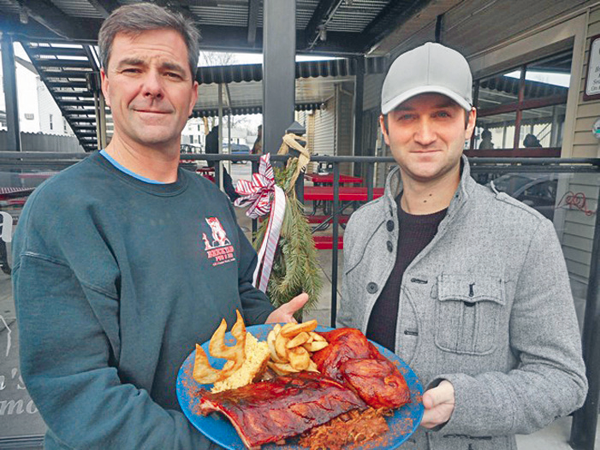