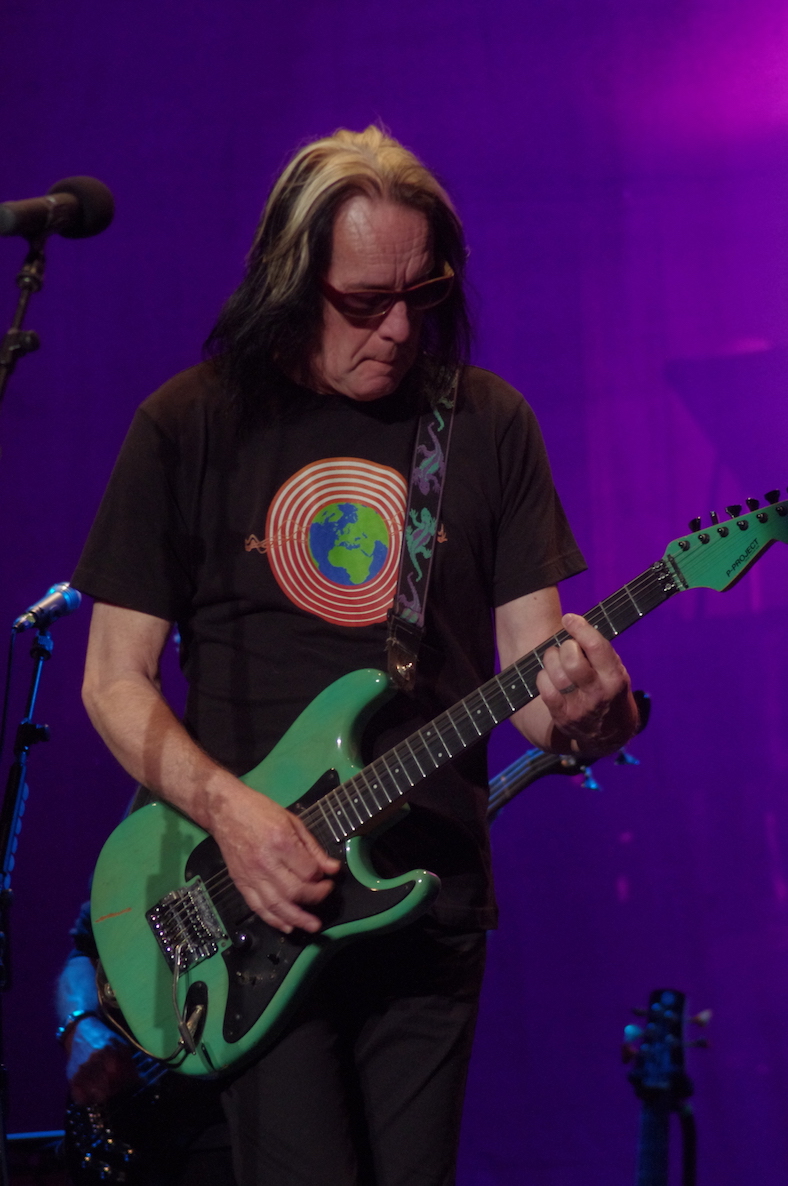 Todd Rundgren is shown performing at the Historic Riviera Theatre in North Tonawanda. He returns to the venue on Wednesday. (Submitted photo)

A few years back, a fan approached Todd Rundgren outside a concert in Buffalo and mentioned to Todd that, after multiple times seeing him, one of his favorite shows took place in the 1980s.

Even a recent radio promotion for Wednesday's show at The Riviera Theatre rattled off three of Rundgren's older and more commercially popular songs - "I Saw the Light," "Hello It's Me" and "Bang the Drum All Day" - songs you are more likely to hear when Rundgren tours with Ringo Starr than on his current tour to promote his latest album, "White Knight."

As Rundgren approaches his 50th anniversary as a recording artist, he still contends with the expectation from some concertgoers that he stays mired in the past. Thanks to an intensely loyal fanbase, Rundgren has been able to continue what created his appeal in the first place: challenging the listener.

Fans expecting a low-key show of mostly older material may be in for a surprise. Rundgren's past two trips to the Riviera, in December of 2015 and May of 2016, sold out. Those shows were not promoting a new album and largely encompassed selections from Rundgren's early catalogue.

Early reports and videos from this tour show a multimedia extravaganza and a healthy dose of material from Rundgren's recent work. The new show bears little resemblance to the earlier trips to The Riv.

For some perspective, "Hello It's Me" will mark its 50th anniversary next year. (It first appeared as a single by Rundgren's group Nazz. "I Saw the Light" first appeared in 1972 and "Bang the Drum All Day" in 1982.)

"My records recently, since I live on Kauai and it is so remote, have become solo projects in every sense of the word. I play all of the instruments. It had become an echo chamber and I wanted to shake things up, so I made this a collaborative effort," Rundgren noted during a recent phone interview.

"The whole 'White Knight' concept came to me when Prince and David Bowie died," he said. "I am kind of the same generation, a kind of autere with your own image; you write your own music and you don't fit into a box."

Rundgren, like many of us, thought artists like Bowie and Prince would be around into their old age, and their passing had an impact on him and the concept of the album. Rundgren said he had been putting out albums in the hope that his rabid fan base would support them, but with "White Knight" he decided to "get serious."

"The 'White Knight' thing is a crusade; not in the medieval sense. It's carrying on that tradition that Prince, Bowie and artists did, the independent autere thing," Rundgren said.

The current jaunt, dubbed the ChivalRock Tour, combines elements of Rundgren's last three solo outings, and includes the reappearance of The Global Girls, Grace Yoo and Ashle Worrick, the background singers and dancers who appeared with Todd on his "Global" tour in 2015.

"This show is an attempt to merge things I have been doing recently. Hopefully it will serve the purpose of promoting the new album while presenting material that people are familiar with, albeit in a more spectacular concept," he said.

The show features a video curtain in front of the band members, costume changes and a distinct flow. While the band is housed behind the curtain, Rundgren and The Global Girls will be dancing and singing.

In recent years, Rundgren has been asked many times if his former band Utopia would ever reunite for a tour. With bands like Yes (whom Rundgren appears with on the Yestival tour this summer) performing with replacement members, he discussed the possibility of a Utopia tour without Todd Rundgren.

"The idea has never come up, and I am not sure if any of the members of Utopia would buy into that," Rundgren said. "In point of fact, it isn't me that is the critical factor as to whether we could reform Utopia. It's (keyboardist) Roger (Powell)."

While the rest of the band is still active in the music industry (Sulton tours with Rundgren, as a solo artist and with Blue Oyster Cult; drummer Willie Wilcox produces commercial music), Powell basically retired from performing many years ago. Powell last appeared with Rundgren in 2009, performing Utopia classics along with Sulton and Prince before Rundgren's "A Wizard a True Star" live show.

Wilcox has not performed with Utopia or Rundgren since 1992.

While many acts tour with few, if any, original members, Rundgren does not want to tour with any replacements.

"I wouldn't want to go out without the original lineup given that all of us are alive," Rundgren said.

As far as a partial reunion he simply said, "I suppose you could call it The New Utopians or something."

Fans of Rundgren will have plenty of things to look forward to even without a Utopia reunion. Rundgren will be on tour with Yes this summer, there is a Rundgren Radio fan gathering in Boston over Labor Day weekend, and plans are underway for a massive 70th birthday celebration next year.