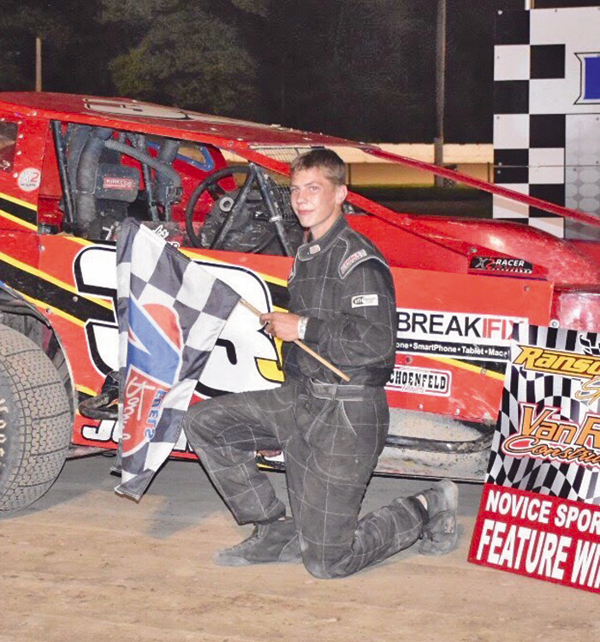 Robbie Johnston's mother took this picture of her then-14-year-old son and his racecar last season at Ransomville Speedway.

At only 15 years old, third-generation Ransomville Speedway driver Robbie Johnston is more than ready to start his second season at the popular Braley Road attraction.

The problem is Mother Nature hasn't been cooperating, sending an overabundance of rain.

Johnston has racing in his blood. The Ransomville resident won't even be age 16 and old enough to get his state driver's permit until October, by which time this racing season should be over. That's why family and friends are sponsoring a raffle to help him pay for gas and repairs.

His grandfather, Dennis White of Youngstown, drove at Ransomville for a couple of seasons about 30 years ago.

"It's an expensive little hobby at his age," White said, but added, "To drive with the 'big boys' down there, he's doing good."

At 14 years old last season, Robbie ended up winning three heat races (the race that determines starting position) and two feature races (the main race) in Ransomville's novice sportsman class. He also was chosen for the best appearing car-novice and the most popular driver-novice awards for 2016.

Robbie tried the go-kart racing, sponsored by the speedway to train and educate future drivers, but had bigger dreams.

"I kept bugging my dad that I wanted to race big cars," the Wilson High School sophomore said.

His father, Rob Johnston, owner of Innovative Auto in Lockport, and also a former Ransomville racer, found a good deal on a car. For the 2016 season, Robbie debuted car 33J on the dirt racing tracks.

His mother, Julie Johnston Krentz, said drivers as young as her son most often go through a few different racing categories and are usually in their 20s before they move into the Ransomville Speedway Sportsman Class.

In addition to Friday nights at Ransomville, last season Robbie also raced at the Merrittville and Humberstone tracks in Canada, and the Fulton track near Syracuse. His first race and first crash was at Merrittville.

"It's definitely something you don't forget. The adrenalin gets going, and it's so much fun," he said of racing. As for the crash into the wall, "Once you get over that first crash, it doesn't matter anymore."

His mother isn't as calm, despite knowing his car is loaded with safety features from a roll cage to seat belt. She points out that speeds can get in the 100-mph range on the straightaway.

"I'm a nervous wreck when he pulls out and the whole time he's racing, even though I know he's safe and his dad wouldn't put him into anything that would hurt him," Julie said.

No matter how many times his car had to be towed off Ransomville's track last season, it was always back for the next Friday night race, thanks to his father's business connections and his and his father's repair experience.

Robbie keeps busy working on his car year-round, along with school and occasional snowboarding. He also keeps track of what's happening at Daytona.

"Racing takes up a lot of time," he said. "I don't really have time to do much more."

Although, at 15, plans for the future can still change, Robbie sees himself fixing cars after high school, with a goal of eventually racing cars professionally.

With his dirt-racing background, he figures he will be in good shape to get his state driver's permit in October, and then an actual license.

As for speeding, Robbie said he's talked to too many people about how much time and money a traffic ticket wastes. After all, keeping a racecar on a dirt track after a crash "depends on how bad it is and how much money you have to fix it."

Robbie does have a sponsorship from the U Break I Fix franchise on Transit Road in Williamsville, but more sponsors and more funds are needed to keep his car on the dirt track. Relatives and friends have organized a raffle this month with a first prize of a Yeti cooler filled with alcoholic beverages (must be 21 to enter), or an open-to-everyone prize of two tickets to see Florida Georgia Line at Darien Lake on June 16. The drawing will take place on May 19. To purchase a raffle ticket, call 716-745-7577, 716-998-8987 or 716-628-5193.

At Sentinel press time this past week, Ransomville Speedway had yet to announce if the Test Tune & Time season opener would be washed out on Friday (May 5) due to continuing rain and flooding. Throughout the season, go to www.ransomvillespeedway.com for announcements and race details.