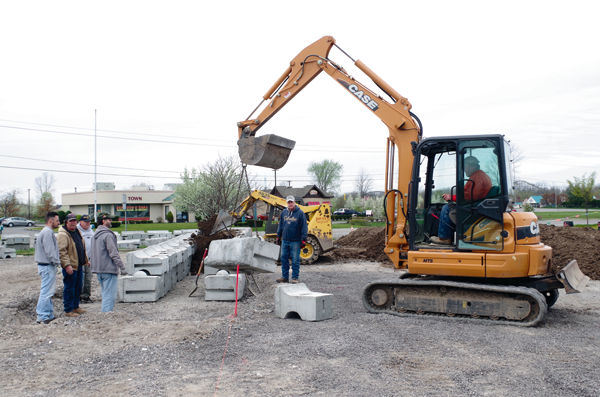 Workers moved concrete blocks into place and filled them with topsoil in the first major work of the DeGlopper Memorial expansion. (Photo by Larry Austin)

Passersby noticed the first major work on the expansion of the DeGlopper Memorial Saturday.

Construction work to form an end wall around the north side of the property between the existing park and Adrian's Custard & Beef began in the morning. The wall will create a central entrance to the expanded memorial that will direct visitors in from a new parking lot.

"This is the first big part of the project that we're doing," said Erik Anderson, chairman of the DeGlopper Memorial Expansion Committee.

"It looks pretty good. We're trying to get people excited," he said, adding that when people see work going on, they may be inspired to support the project. "We've got people slowing down already looking and wondering what's going on."

"It's about veterans, it's about Grand Island," Anderson said.

Dozens of 1,600-pound retaining wall blocks that were donated by Kistner Concrete Products of Lockport and delivered April 19 were put into place and filled with topsoil. They will have 7-foot spruce trees planted in them.

Anderson said the memorial would not be possible without people volunteering their time and energy to the effort. About two-dozen people, many of them members of Island veterans organizations, were on hand Saturday at the park. Anderson said some of those who showed up to work were citizens who found a notice of the work project on social media or in the advertisements published in the Grand Island PennySaver and Island Dispatch.

"We've got a lot of good people working. It's amazing."

They tried to do as much work as possible Saturday, he said. "After this, at our next meeting, we'll talk about the next phase. But, again, the next phase comes with help from donations. ... Even $5, $1, 50 cents, every little bit helps. This is what it's about. It's about showing the veterans that we care about them, we believe in everything they did."

To donate to the DeGlopper Memorial expansion, visit online at degloppermemorial.org/donations, or go to Certified AutoBrokers at 1693 Grand Island Blvd.

"We have a donation box here right at the front counter as well as a display showing the new memorial drawing," said Chris Taylor of Certified AutoBrokers. The company, supporters of the DeGlopper Memorial project from the beginning, is about to roll out another donation campaign. Certified AutoBrokers will donate a portion of each sale this month, with a benefactor pledging to match Certified AutoBrokers' donation up to $1,500. CAB hopes to make a $3,000 donation at the end of the month, Taylor said.

"Mr. DeGlopper, the family and the veterans deserve something like this," Anderson said of the DeGlopper Park expansion. "They deserve something they can be proud of, something they can look to and come here and reconvene and think about their loved ones that may have passed on during war or loved ones that are still overseas. They can come here and reflect and have a quiet place to think about everything that is going on." 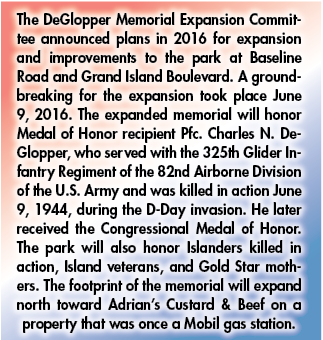