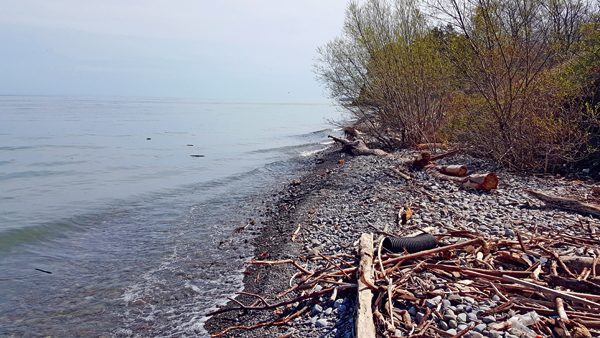 A debris-strewn shore near Porter on the Lake Park. Lake Ontario shore levels are currently more than three feet over December 2016 levels. (Photo by Terry Duffy)

The International Joint Commission's Lake Ontario-St. Lawrence River Board, which regulates the outflows from Lake Ontario under Plan 2014 as required in a 2016 Supplementary Order by the IJC, issued the following on April 25 with respect to the high water conditions affecting Lake Ontario, particularly on the southern shores of the lake in New York:

"Rainfall has been well above normal across the entire basin, with some areas having received at least twice their average amounts since the start of the month, including the western end of Lake Ontario and large parts of the Ottawa River basin, which flows into the St. Lawrence River upstream of Montreal at Lake St. Louis.

"The rain, coupled with snowmelt in northern parts of the system, has resulted in increased stream flows, rising water levels and flooding on Lake Ontario, the upper and lower St. Lawrence River, Lake St. Louis and on many inland local tributaries, including the Ottawa River."

The board reported Lake Ontario has risen 15.4 inches since the beginning of April, while the St. Lawrence River at Lake St. Louis reached a flooding level of 73 feet.

All this has exacerbated what is already a difficult situation for property owners, local governments and boating interests along the southern Lake Ontario shoreline of New York. Niagara County declared a 30-day disaster area on April 20 for all shore areas, many of which are now experiencing significant flooding and erosion conditions. Lake Ontario shore areas in Olcott Beach and Wilson harbor remain under water from the elevated lake levels, with emergency sand bagging and threats of evacuations becoming the norm.

Interests, including local governments, private properties, marinas and boating activities, have been affected and, increasingly, local, county and federal government officials are placing the blame on the blame on the IJC - namely its 2014 plan, which has returned the regulating of Lake Ontario levels to more traditional, natural methods.

U.S. Rep. Chris Collins, R-27th, whose district covers the lake shore from Youngstown to the nearby Rochester area, has been particularly critical, going so far as blame the IJC directly for its implementation of Plan 2014. Further, Collins joined with U.S. Rep. John Katko of the Syracuse area and is now threatening to use congressional action and his input with the Trump administration to withdraw U.S. involvement from Plan 2014 completely.

"Plan 2014 has been an utter disaster for Lake Ontario taxpayers and communities since it was approved in the final minutes of the Obama administration," Collins said Tuesday in a visit to survey the flooding conditions in Newfane. "Both the property damage and overflow of debris into Lake Ontario that I inspected today could have been avoided. I came here today to assure local officials and Lake Ontario homeowners that I am working with the Trump administration to reform the IJC and repeal Plan 2014 as soon as possible."

As of Tuesday, the lake was 19 inches above normal and the lake is expected to crest in mid-May by an additional 11 to 14 inches or more. The lake stands at 21 inches above its long-term April averages and, since December 2016, has risen 39 inches, according to data from the MLive.com Media group, based in Michigan.

But, despite forecasts of worsening conditions in coming weeks, the International Lake Ontario-St. Lawrence River Board remains optimistic in its long-term estimations.

"Flows from the Ottawa River have peaked and are now expected to decline, and flooding in the Montreal area is subsiding, allowing (for) higher outflows from Lake Ontario," the board reported. "Nonetheless, inflows from local streams and Lake Erie remain high, and Lake Ontario levels are expected to continue rising in May, and possibly into June if the wet weather persists.

"As water levels on Lake Ontario rise, its outflows will increase and high levels downstream at Lake St. Louis will continue. Coastal jurisdictions should prepare for the possibility of major coastal flooding as storms frequently occur at this time of year. Though it has been nearly 20 years since water levels have been this high (since 1998), higher levels on Lake Ontario and the St. Lawrence River have occurred several times in the past and will occur again in the future."

"The current high water levels have not been caused by Plan 2014," the International Lake Ontario-St. Lawrence River Board emphasized. The agency stated "Lake and river levels would have been nearly identical this year under the previous regulation plan. Plan 2014 will continue to adjust the Lake Ontario outflows in order to minimize and balance flooding on Lake Ontario and along the St. Lawrence River in the Montreal area."

The board, in conjunction with its staff, continues to monitor the system. Further information on outflow changes is available at http://ijc.org/en_/islrbc.