The view Niagara SMA students were able to capture from the outfield at Fenway Park.

Walk-off while traveling through Boston

By Kyle Barker and Alyssa Norman

The sound off the bat at Fenway Park was a loud crack, maybe made louder from the chill of an April Boston evening. The organ is playing loud, joyous songs as the vendors run around the ballpark selling peanuts and hot dogs. Long into the night witnessing a scoreless baseball game in extra innings, boom! The students in the Sport Management Association (SMA) at Niagara University, took in a three-run walk-off home run thanks in part to Red Sox catcher Sandy Leon in the bottom of the 12th, on the second day of the 2017 Major League Baseball season.

Although the baseball game was a nice touch to the trip, the group headed to Boston with a much different focus.

Watch the reaction as Sandy Leon walks off for the Red Sox:

Before the baseball game on Wednesday, the group was able to take a tour of Harvard and attend a career fair that was hosted at Fenway in the right field concourse. Although it was colder than expected, the experience at the professional level will help all SMA members in future endeavors.

The trip began with Niagara University Sport Management Alumni Andrew Chesebro taking the students on a tour of the athletic facilities of Harvard University. The first stop of the tour was Harvard. The students took in the Bright-Landry Ice Arena where the Frozen Four-bound Harvard men's and women's ice hockey teams played. The trip continued with tours of the athletic offices in the Murr Center, followed by quick tours of the squash, indoor tennis, and swimming and diving facilities.

View of Harvard Stadium from the back-end zone before students took the field for the tour.

"Pulling up and seeing the stadium felt like we were being transported back in time," said Heather Smith, a senior sport management major. "Harvard does an excellent job at preserving their history and displaying it in their elegant museum."

The trip also provided the students with a valuable experience at a career fair boosting more than 20 organizations. This includes the "Power 4" Boston franchises in the Celtics, Bruins, Red Sox and New England Patriots, as well as a communication/television company giant in New England, NESN. 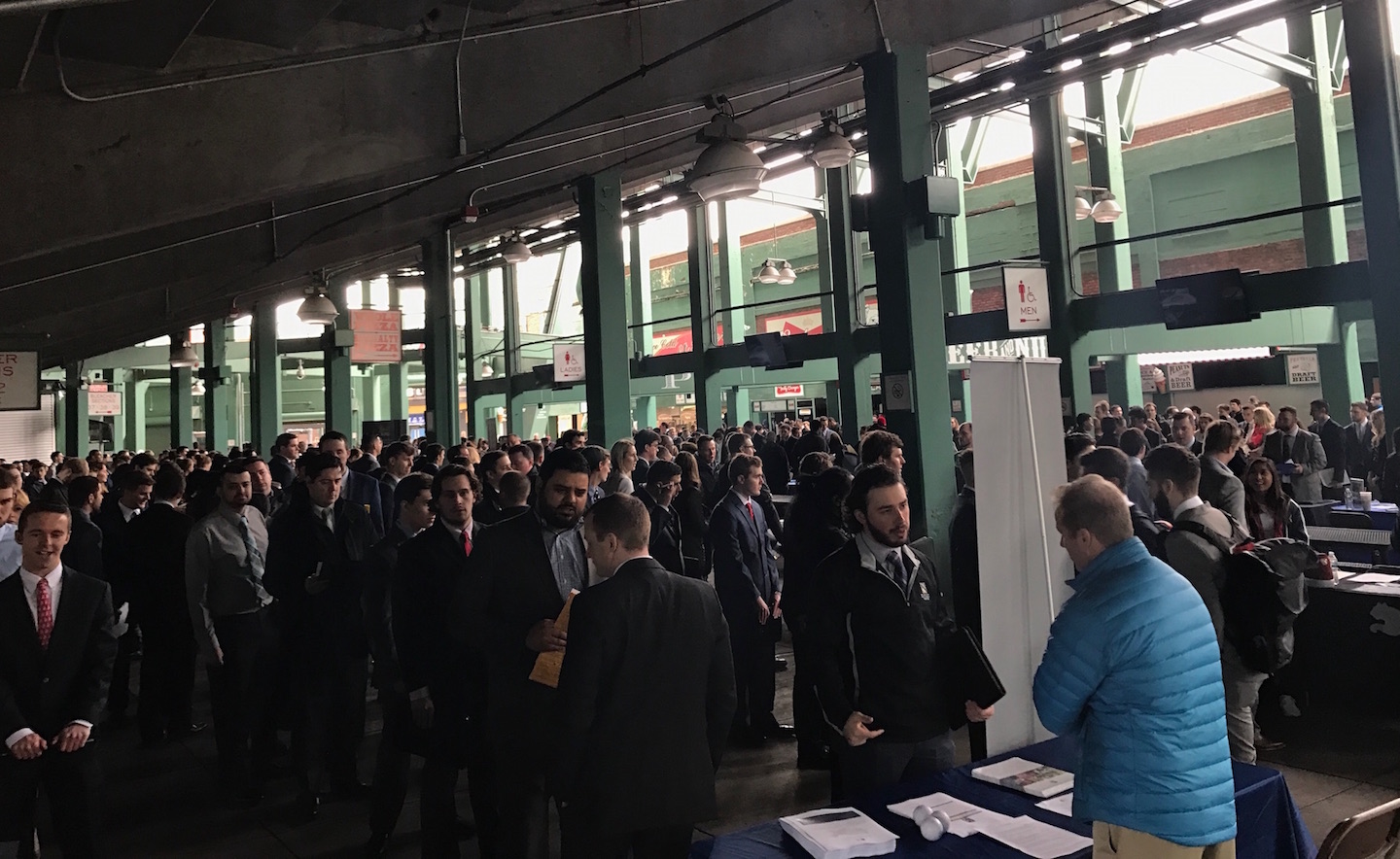 The scene in the right field concourse of Fenway during the career fair.

"Although the job fair was packed with a lot of people, that didn't turn me down from talking to the sport companies that were there," stated Josh Dumbleton, a Niagara junior, after the career fair. "At the end of the day, the job fair was a great experience just to get the feel of talking to professionals."

After the awe-inspiring career fair, everyone separated for dinner around Boston before the game. Some entered the stadium earlier to watch warmups and catch a few baseballs.

"It was my first trip to Fenway, and it exceeded my expectations," said Niagara University SMA Secretary Greg Jubert. "The ballpark is a historical venue, and to experience a game at a ballpark that has stood the test of time allowed for some memories that I will never forget."

"Jason talked about fundraising and how you have to be comfortable with people," Smith stated. "He also stated that you may feel like you're in a dead-end job right now, but the connection will lead farther than you ever thought."

"To be able to see so much Niagara history in a place that historic really opened my eyes to just how rich of a history our program holds," Jubert stated. "I was amazed by how the building balanced the history aspect with the interactive components and was able to modernize the displays."

The Hall of Fame, located in Springfield, Massachusetts, has three floors in a circled dome. The third floor is home to all the Hall of Fame member's bios and pictures of those lucky enough to be enshrined in the Hall of Fame. The second floor is home to exhibits with artifacts dating back to the very beginning of basketball's history. The bottom floor features a unique basketball court, allowing guests to take up shots in the Hall of Fame alongside a wall full of the basket's history. Copies of the basket styles from the beginning to modern day sit alongside the wall, allowing folks to experience what it was like to shoot on a basket in the early 1900s all the way to present-day technology. 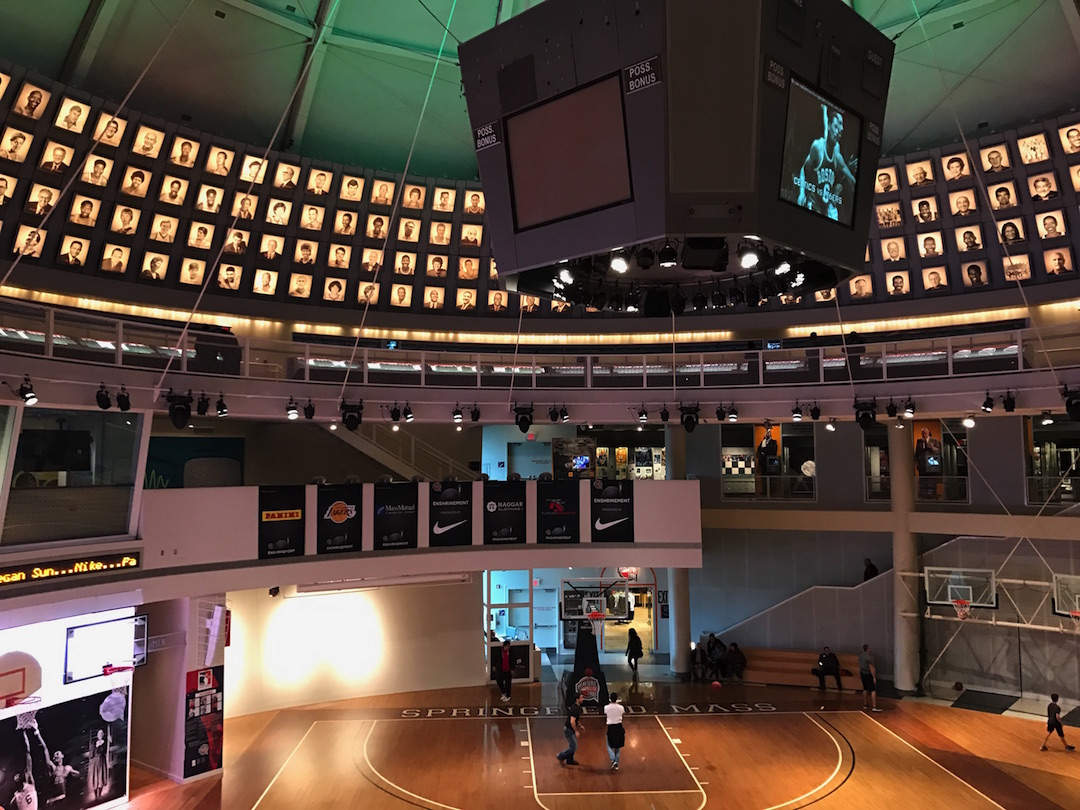 The second-floor view of the basketball court at the Basketball Hall of Fame.

"The Basketball Hall of Fame was not the average stuffy museum," Smith stated. "They had a lot of interactive displays, including a center court basketball challenge area where you can test your shooting skills."

"This trip was an unbelievable experience for anyone that has interest in the sport management field. The Harvard facilities tour, Basketball Hall of Fame and the career fair at Fenway Park were all beneficial in their own unique ways," stated Niagara senior Jon Borek. "What could be better than witnessing a 12th inning walk-off home run at Fenway Park? Nothing, that's what."

"Overall, what Niagara University SMA has provided me, allowing me to be a part of the leadership group, I know that me and my fellow officers can hold our heads high on everything we were able to accomplish this year, and what we've been able to do for our members," said Taylor Bosket, a senior at NU. "I'm very happy with this year and proud to have been a part of such a great group."