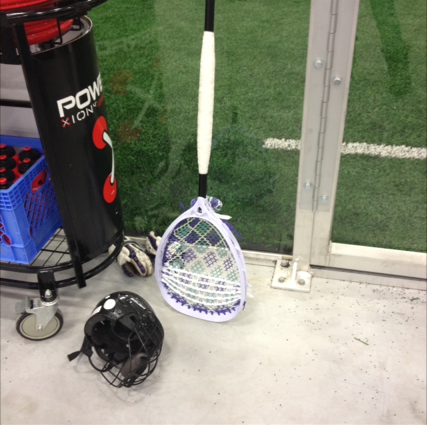 What does it take to win National Lacrosse League championship?

In 5 years, only two teams have won the National Lacrosse League Championship

What  is the fastest game on two feet?

Box lacrosse has really grown through the years. The atmosphere of a lacrosse game is like nothing you you've ever seen. The loud music blasting in the stadium as you are sitting down in your seat watching warms up. As well as hearing the loud thump of the ball from player tossing the ball on the boards.

The lights dim and the anthem plays. Seconds before a game, you see the players in the huddle and jumping up and down because they're preparing themselves for the battle. You next hear the fans chanting on the top of their lungs for their team.

Whistle blow - it's game time and the two faceoff guys take their spots and battle to win the ball for their team. You see players quickly going up and down the field. One second a team could have the ball and, in the blink of eye, the other team has the ball.

The Rochester Knighthawks ended up breaking that barrier when they went on a three-year winning streak back in 2012 . Now the Saskatchewan Rush is following right in their footsteps, and could be the second team in franchise history to win three years in a row.

For these two teams, the journey to the championship isn't an easy task. First off, they need to play nine other teams who are just as hungry for the championship cup and ring. They have to play 18 games and have the best record to advance to the playoffs.

Even if you can make it to the playoffs, anything could happen on any given night. You might walk into the playoff with a better record than the other team, but you could get outplayed. The leading scorer on your team could get shut down.

In 2014, there was a day that would go down in franchise history. The Knighthawks won their third championship Saturday, May 31, against a soldout arena. All you could see when you walked into the Blue Cross Arena was the sea of purple and teal. There was a lot of fan pride that night.

Here is a video highlight from when history was made:

Two years before that 2014 game, those same fans packed into the Blue Cross Arena to support the Knighthawks as the team took on the Edmonton Rush (who've since changed their name to Saskatchewan Rush).

Edmonton was crushing the Knighthawks in the first half with a 5-1 lead.  You could see the panic in the audience as many fans sat there in silence. Some thought there was no way that a team could possibly come back. The player momentum wasn't there on the Rochester side. A  thought in many fans' heads was Rochester just blew its chance of winning the championship.

But just when you thought all hope was lost and you were preparing yourself for the letdown, Rochester came back in a blink of an eye. All of a sudden, you heard the horn blasting and the players on Rochester celebrating as they got closer to catching up to the Rush.

Between each goal, Rochester got the fans got louder and louder. All you could hear was "Let's go Hawks." The building was rocking with pure excitement.

Rochester came back with the huge W and defeated the Rush, 9-6.

With the huge victory in 2012 season, the pressure was on for the Knighthawks. They had a huge target on their back and they were the team to beat. All teams were out to get Rochester.

Another long 16 games, but the Knighthawks managed to play tough and get into the championships. But in order to get to that championship game they needed to make it through playoffs.

Playoff time! It was the division semifinal game and the Knighthawks pulled off the victory over the Philadelphia wings with the score of 10-8.

Now the division final. The pressure and heat was on. If they won this game, they would advance to the championship once again. The game was going back and forth. It seemed like Minnesota get a goal then Rochester.

The clock ticked down to zero and the Knighthawks took the win, 12-10.

Back to the championship again. Rochester faced some challenges going into this game. One of key offensive players, Cody Jamieson, was playing though an injury. Jamieson was playing on hurt ankle, which he hurt during the first playoff game.

With Jamieson hurt, what would the fate of this team be? He was the leader scorer and a key player. Many worried that he would either reinjure himself playing, or, with him being injured, the team would suffer.

But other players ended stepping up and they pulled off the tight 11-10 win.

The Target on Rochester's backs got deeper. Teams were sick of hearing "Rochester "Knighthawks are the best team." They wanted to strip away their title and see a new team have the bragging rights.

But what did Rochester do? They came out with their best record yet. They only lost four games in the season.

Playoffs came around ,but for winning the first place in their division, they got a bye week. This gave players a chance to rest up and recoup.

The playoff format changed, so they had to play a best-of-two game series.

The Knighthawks faced their biggest rivals: the Bandits. First game was in "Bandit Land," which is tough venue to play in. The fans always chant "B-O-X, B-O-X" when players go in the box, and the games are always so intense do to the fact these two teams are thruway rivals

Game one: the Bandits ended up coming out with the win. The Bandit fans were thrilled and they thought they put the nail in the coffin to end the Knighthawks run for the cup.

Game two: it was do or die for the Knighthawks, as they knew what was at stake and they couldn't let their fans down. Rochester came out victorious.

But now the catch was because they both won a game who would come out on top during the 10-minute mini-game.

The player who stepped up was Cory Vitarelli, or who fans like to call "The Dog." He netted the mini-game overtime game-winner to put the Knighthawks back into the NLL finals once again. Vitarelli ended up shooting with his opposite hand after he got past his defender, which Cosmo, the Bandit goalie, did not see coming.

The luck was with the Knighthawks as they stepped back into the championship game. This time they were playing against the Calgary Roughnecks.

Game one Rochester lost, so they were put in the same spot that they must win game two to push them into the 10-minute mini-game.

Could Rochester do it once again or would they fold under the pressure? Rochester had the support of their home crowd and the ringing of many cow bells to pump the boys up, so they played their best.

The winner of game two was  Rochester, which means the 10-minute overtime was going to determine the winner.

Of course, Calgary scored two real quick goals and fans started to get nervous as the time was running down. But fans know the game isn't over till the clock says zero. Nervously sitting there, fans watched the time on the clock go down.

Around the 2:15 mark, Craig Point scored to keep the hope alive. With that goal, the fans of Knighthawks started to get loud and pumped up. There was still hope for the Knighthawks.

A couple seconds after the goal from Point, Joe Walters tied the game up at 2, just like that. Two real quick goals in under a minute.

All of sudden, every fan was out of their seats, yelling at the top of their lungs, "Let's Go Hawks." The Blue Cross Arena was going nuts with energy.

With the game being tied with a 1:15 left, the Knighthawks knew what was at stake for them and what this game would mean. The players knew if they could pull this off they would be the first team in NLL history to win three in a row.

Just like that, with 58.5 seconds left, Point scored a goal and made it 3-2. You could see the excitement on the players after that goal. It was a big goal and needed to keep the Roughnecks in check.

After that goal, all you could hear was the rush of the crowd. It was probably the loudest Blue Cross has ever gotten. No one was sitting in a seat at that point.

Their last 58.5 seconds all you saw was a sea of purple and teal standing screaming at the top of their lungs.

Dan Dawson got another goal at the 45.7 mark, but they called it a "no goal" because they said he stepped in the crease.

The clock finally reached zero and the game was over just like that. The Knighthawks made history and 2014 was the end of their championship run. The journey to get three championship rings in a row wasn't easy, but they did it. (http://www.knighthawks.com/)

That team Rochester beat in their first run for the cup is now following behind the history the Knighthawks made. In the past five years, only two teams have won the cup: the Knighthawks and the Rush. If the Rush win this season, they would be the second team in franchise history to win the cup.

Winning is never easy, but these two teams  went against the odds and made a name for themselves in the NLL.