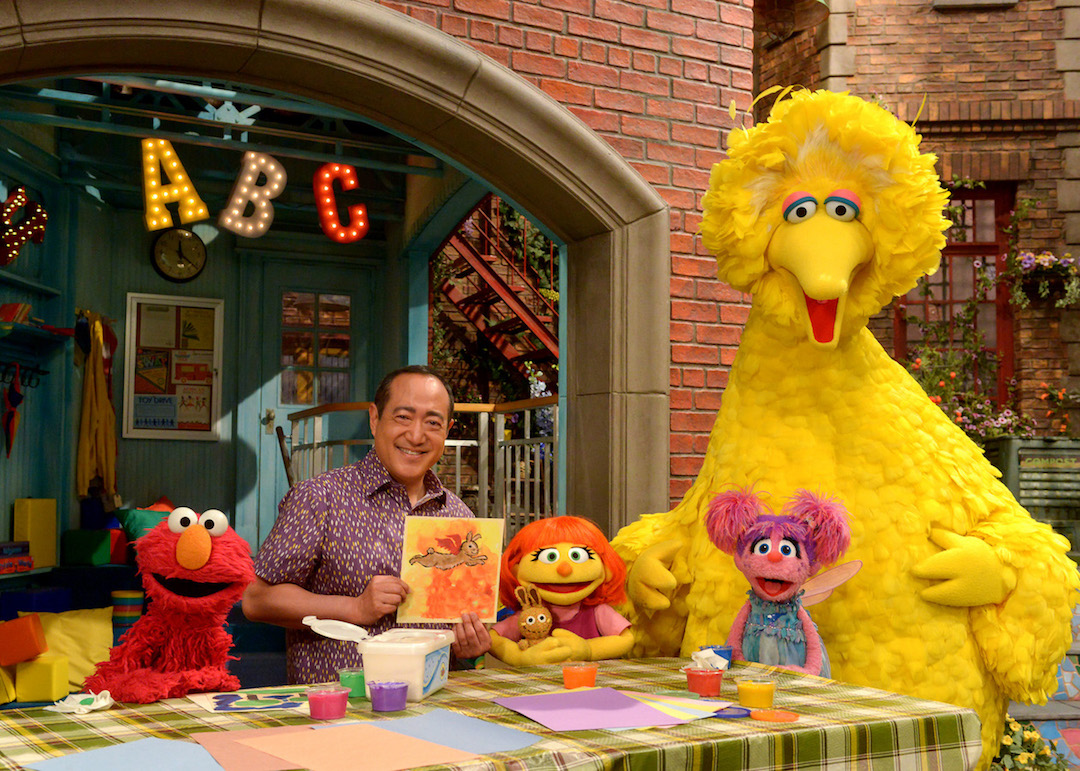 Meet Julia: Pictured is a scene from season 47 of "Sesame Street." (Photo by Zach Hyman)

A young child around the age of 5 is out playing on the playground; parents as usual swarm around keeping a tight eye on their children. A fire truck comes by with loud sirens; all the kids are interested and run to the edge of the playground to see the trucks drive by.

All of the kids except for one; this kid is screaming and covering his ears.

The rest of the kids don't know what is going on or why he is so upset by something the rest of them think is so cool. The parent of the upset child runs to him to calm him down and explains to the other parents that he has autism. Although the parents nod in acceptance, they now struggle to determine how they will explain it to their confused kids.

"Sesame Street" has recently provided a way to make this conversation between parents and children a little bit easier.

Julia is a redheaded creative Muppet who just wants to play alongside the other Muppets on "Sesame Street," but she plays differently. Sometimes she is very hyper and other times she doesn't answer when her friends talk to her. She can go from super quiet to very loud and she does everything at her own pace. She is different from any Muppet that is on "Sesame Street"; she holds conversations differently and even does simple things like playing tag and painting differently.

This new Muppet, Julia, made her debut on "Sesame Street" on Monday, April 10. She was created with the help of educators and child psychologists, alongside autism organizations to help decide which characteristics Julia should have.

Autism spectrum disorder, otherwise known as ASD, is a neurological and developmental disorder that begins early in childhood and lasts throughout an individual's life. People are diagnosed on a spectrum because people with ASD can have a large range of symptoms from being low functioning to high functioning.  According to the National Institute of Mental Health, some characteristics of someone with ASD include having difficulty communicating and interacting with others and repetitive behaviors. Typically, symptoms are usually recognized within the first two years of life, and these symptoms hurt the individual's ability to function socially in various ways.

"Sesame Street," an American television series, which has been a staple of PBS since November of 1969, has finally realized this need and decided to create a character that fills this much-needed role.

Julia's debut episode showed her playing with the other Muppets that are usually on the show, such as Abby, Elmo and Big Bird. In a scene of this episode, Big Bird seems to be confused by Julia's repetitiveness and the lack of communication she makes toward him while he is clearly talking directly to her. Alan, one of the actors on the television series, goes on to explain that Julia has autism and that she just plays a little differently than the rest of them, but that she still wants to be included. Once Big Bird is given the reassurance that Julia does like him and likes to play, he understands that she is different and has no problem playing with her.

If you would like to see this clip of Julia's debut for yourself, click here to watch "Sesame Street's" first autistic Muppet.

While talking to Julie Wolf, a speech-language pathologist, about "Sesame Street's" latest Muppet addition, she stated, "I think this is overdue, and at the same time groun breaking. 'Sesame Street' is the cornerstone of children's television and education across different groups. Julia is just one of the kids in a mainstream way; it isn't a show specifically about autism. That makes it more powerful."

That's just it; this show has nothing to do with disorders. Even though it is just an educational television show that children watch daily and respond to, they chose to take this disorder and make a Muppet out of it.

Julia's puppeteer is not just anyone, but Stacey Gordon, a mother of a son with autism. Her role as Julia's puppeteer just adds to the powerful message that "Sesame Street" is trying to send to not only children who watch the show, but to the parents of these children.

This is a mother of a child on the spectrum; she has seen her own child grow and experience some of the characteristics that Julia displays on the show.

On CBS News "60 minutes," Gordon stated, "Had my son's friends been exposed to his behaviors through something that they had seen on TV before they experienced them in the classroom, they might not have been frightened. They might not have been worried when he cried. They would have known that he plays in a different way and that that's OK."

Joey Navedo, community habilitation specialist, also stated, "I often find that prejudice and the fear some express toward certain groups of people comes from a lack of exposure and knowledge about that group of people. By introducing Julia to children, they will have just that much more knowledge about other children on the spectrum, which would then help eradicate any prejudice or fear that could otherwise manifest."

As someone on the spectrum, Justin Dennis shared his thoughts on whether Julia accurately represented children on the spectrum. He stated,  "I think so, depending on the person, of course. For some people with autism, myself included, being social depends on the situation. There's time when you're alright with people and times you're not the best. Sometimes I don't get the situation; sometimes I'm shy about some things; and other times I can't shut the hell up. It just depends on the situation and if you're comfortable with someone."

Talking to parents with children on the spectrum, they are often brought to tears by the creation of this Muppet. This is a character that tugs at the heart of all. This Muppet is accepted by all of her friends on "Sesame Street" and by the parents who let their children watch "Sesame Street." With time, children will learn to accept their friends that may be similar to Julia.

When children see their favorite characters, such as Elmo and Big Bird, being nice to someone who is different, they will, in turn, learn how to be nice to kids that may be different from them.

This character means a lot to everyone involved. This Muppet may be a Muppet on screen, but goes beyond "Sesame Street."

No child on the playground will have to feel different anymore. Confusing conversations between parents and a children can now be avoided. One less child on the spectrum will feel left out. "Sesame Street" has filled a need that pleases many.