Village of Lewiston Board to vote on budget on Wednesday

No residents spoke at a public hearing on Monday, trustees offered words of praise to Deputy Treasurer Edward Walker and, now, the Village of Lewiston Board is ready to accept the financial plan for fiscal year 2017-18.

A special meeting to approve the proposed $3,461,639 budget is scheduled for 6 p.m. Wednesday in the mayor's office inside the Red Brick Municipal Building, 145 N. Fourth St.

The tax rate will be $7.38 per $1,000 of assessed property valuation - the same rate residents paid in fiscal year 2016-17. Trustees can hold the line thanks, in large part, to a $4 million bump in the property assessment preliminary roll recently submitted by the Town of Lewiston.

"We had originally factored in an 8-cent increase in the tax," Walker said. Even at that rate, the village still expected to need more than $65,000 in fund balance money to balance the budget. "But, once we factored in the new assessment, left everything else the same, we actually decreased the amount of appropriated fund balance that we had to add. ... So, the board rightfully said, 'No, we are not going to increase the taxes.' "

There will be a 5-cent increase in the water and sewer rates ($3.59 and $4.69 per 100 cubic feet of usage, respectively). The Village of Lewiston is one of the four stakeholders in the Water Pollution Control Center. Walker said each participating municipality is raising the sewer rate 5 cents to pay for a new building.

Overall, "We were pretty pleased," with the rest of the budget, Walker said. "The mildness of the winter, and the less usage we had in salt and overtime and things like that, allowed us to come in break-even. We had forecast $165,000 appropriated fund balance to balance the budget, and we ended up not having to. We actually increased our fund balance in our general fund a little bit."

With $1.4 million in fund balance, "One of the things that we have been looking at very strongly is the need to replace the water meters throughout the village," Walker said. "That's the heads of the water meters that transmit the readings to us. Right now, we use a system that's 14 years old. ... The batteries in those units are not replaceable, and they were only good for 10 years."

Walker explained the current meters use a transponder that transmits a radio frequency signal to a meter-reading device. The Department of Public Works uses portable meter-readers to pick up the signal and relay the information back to the Red Brick.

"More and more of those transponders are failing," Walker said. "We have to manually do the readings, which is not beneficial."

To remedy this, "We're looking at a system that is really state-of-the-art," Walker said. "It will replace all of those transponders. It will use cellular service."

"Basically, we will not have to use DPW folks to get the readings," he added. "I can basically sit here and download all the readings. ... And what's a really nice benefit with this system is any resident can monitor their own water consumption any time they want. They'll be able to log in to the system; they'll be able to look at their meter running."

Walker said the new equipment is said to have a 20-year shelf life.

Trustees have said it will cost about $370,000 to replace 1,200 water meter heads. Walker said the village is looking for grant money to offset the fee. He noted the village also will meet with its accountants to discuss a possible bond.

Trustee Vic Eydt said, "I want to thank Ed for all of his work on this past budget. He's really made it so easy to understand some very difficult situations. He puts it together so people can understand it." 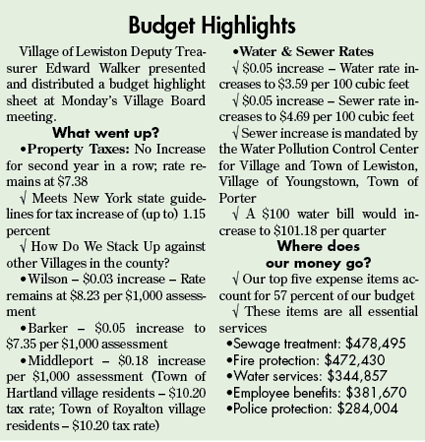