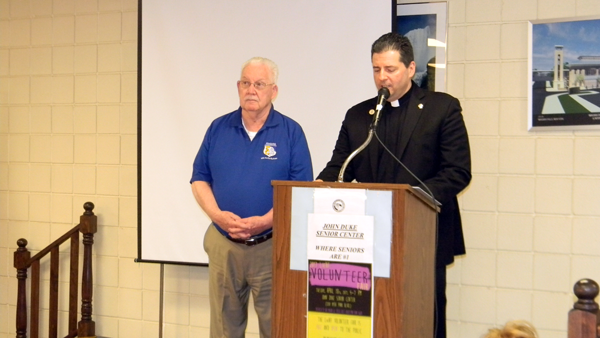 Art Eberhart, co-founder and executive director of Niagara Falls PAL, who was inducted to the Hall of Fame by Niagara University president, the Rev. James Maher, C.M. (Photos by Terry Duffy)

They come from all walks of life - all with an interest in helping the community.

Participants ran the gamut, from Meals on Wheels to Discover Niagara, Planned Parenthood to Footprints on the Future, Buffalo-Niagara Riverkeeper to Artpark, the Niagara PAL to Niagara Falls hospitals, medical professionals and more.

"Your interest in volunteering for the community is commendable," Niagara Falls Mayor Paul Dyster told the host of residents and organizations in attendance.

The event provided a forum for interested residents from all walks of life to participate. It also honored those who have already made the commitment of working for a better Niagara Falls with the unveiling of the all-new Niagara Falls Volunteer Hall of Fame.

"The Hall of Fame was established to honor residents of the City of Niagara Falls who have dedicated countless hours and efforts to giving back to their community," said Dyster. "Through the Volunteer of Fame we celebrate the giving spirit of the people of Niagara Falls who make this community such a special place to live.

"As Martin Luther King said, 'Life's most urgent question is what are you doing for others?' Each class of the Niagara Falls Volunteer Hall of Fame will embody this sentiment by giving back to individuals and families for their community as a whole."

The Hall's first class, chosen from nominations received by Dyster's office, the ReNU Niagara website and Congressman Brian Higgins, represented those with that lifelong commitment. Criteria for the honor include being a current or former Falls resident and a minimum of 15 years community service.

"We honor these individuals as a way of honoring everyone out there in the community - the volunteers who serve their fellow man, whether that service is recognized publicly or not. Anyone who volunteers to work in service to their community is a winner. And every time someone volunteers the community as a whole, is a winner," said Dyster.

He went on to join with Niagara University president, the Rev. James Maher, C.M., and U.S. Rep Higgins in presenting the inaugural Hall of Fame Class.

"Art has dedicated a lifetime to helping those serve those around him, while focusing on improving opportunities throughout Niagara Falls," said Mahar in his remarks. He went on to praise Eberhart for his service to the Falls community and its youth. "It (involves) a myriad of integrated and interactive programs that (lead) youth in positive endeavors. ... His greatest asset is his trust in the youth and putting them in a position to be successful."

In honoring Harris, who was unable to attend the induction due to work at Memorial that afternoon, Mahar lauded her volunteerism efforts. "Evelyn will go at any length for what she believes in - including women's rights, African-American history, access to healthy food for all," he said. "She is an incredible advocate for the City of Niagara Falls and its people."

"Our goal is to help," said Harmanson, "to get the word out that we are here."

Higgins went on to recognize Higgs, who also was unable to attend, and Lane by describing the two as "enhancing the quality of life in your community, and enhancing everybody's lives who live in this community.

"Norma is one of the most engaged people in the City of Niagara Falls. ... Ms. Higgs is a pioneer who devotes a tremendous amount of energy in keeping her city clean and beautiful," said Higgins, as he noted her involvement in Falls Block Club and the Niagara Beautification Commission.

"Many congratulations to Norma for her great work."

Higgins concluded his remarks by offering praise for Lane as a "tireless advocate the Niagara Falls Air Reserve Station," recalling to visitors how Lane over many years proved instrumental in maintaining the continued presence of the Falls base in the face of threatened government closure.

"He had a gentle spirit and a giving heart, setting a great example for future generations of service and volunteerism," said Higgins.

That spirit of volunteerism was one that ringed with many who attended the Tuesday program. It holds as an attribute that #LiveNF organizers embrace and aim to grow in the community.

For more information on their Volunteer Program, visit www.niagara.edu/renu. 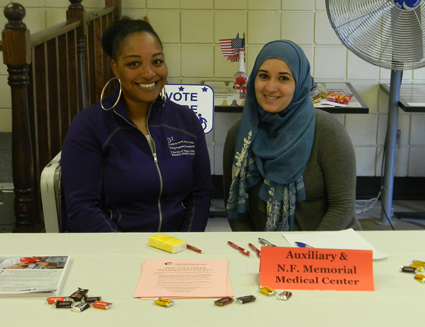 Volunteer Fair participants were many and represented numerous interests. 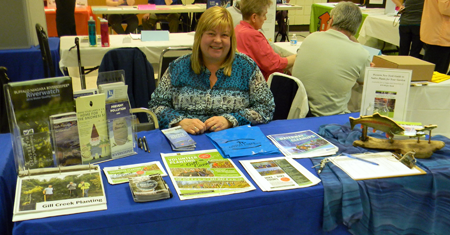