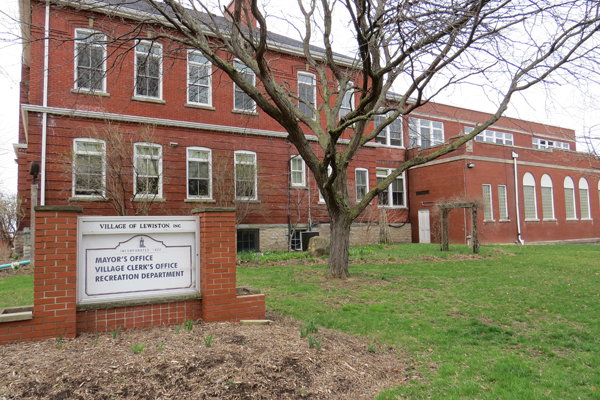 The Village of Lewiston Board of Trustees aims to keep the tax rate flat for the next fiscal year. Meanwhile, residents living on Fairchild Place and Onondaga streets have noticed more activity at the two major project sites.

Deputy Treasurer Edward Walker had welcome news for the Village of Lewiston Board of Trustees on Monday. Thanks to an increase in property assessments, trustees can maintain the current tax rate - $7.38 per $1,000 of assessed valuation - and use less of the municipality's reserves.

"We got the preliminary role last week, from the Town (of Lewiston). ... It's $4 million more than it was last year," Walker said. "We were able to cut the appropriated fund balance down to $52,000 ... without changing anything else."

At the start of the budget review last month, board members were considering an 8-cent tax increase, which would've earned the village about $14,000 in additional revenue. Under the state constitutional tax rate, the $7.38 tax rate could be raised 1.15 percent, up to $7.46.

However, upon hearing the municipality had a fund balance in the neighborhood of $1.4 million (around 40 percent of the proposed 2017-18 budget), trustees asked Walker on April 3 to prepare a budget with no tax increase.

Board members suggested the office of the state comptroller would be in agreement with the municipality using some of its reserve money to offset upcoming budget expenses. The OSC, they said, looks favorably upon the village's fiscal status.

"And it's entirely possible, given what the weather situation was this last winter, that we may (not need that much)," Walker said. Each year, one of the village's biggest budget expenses is the Department of Public Works. In the current budget, DPW expenses total almost $350,000.

"We had forecasted a fairly significant appropriated fund balance last year (more than $165,000), and we ended up on the plus side," Walker said. "The only places where we had deficits ... we had some deficits in the water and the sewer funds, which we will hopefully correct. We are still looking at the nickel (increases)."

The 5 cent rate upsurges in water (up to $3.59 per 100 cubic feet of usage) and sewer ($4.69) are determined based on what Niagara County charges the village for water, and what the village needs to pay for its share of the Water Pollution Control Center's new building, respectively.

Each trustee thanked Walker for preparing multiple budget options, and thoroughly reviewing each line over the course of a handful of meetings.

Village of Lewiston Mayor Terry Collesano said, "We all worked hard at it."

"We pay taxes, too," he added. "We don't want our taxes going up anymore than anyone else does."

Deputy Mayor Bruce Sutherland said, "We've had a couple of mild winters, and that's afforded us the opportunity to increase our fund balance. ... And be able to keep the taxes where they are."

A public hearing on the proposed budget is scheduled for 6 p.m. Monday in the Morgan Lewis Village Boardroom inside the Red Brick Municipal Building.

Trustees are expected to approve the budget at a special meeting the week of April 24 (date and time to be determined), upon completion of the tax cap summary.

The next fiscal year begins on June 1. 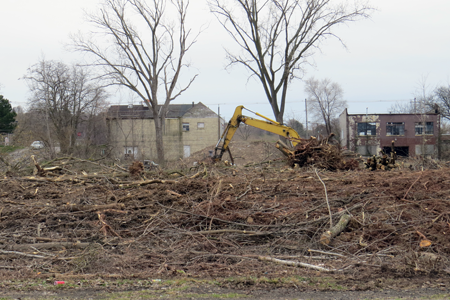 The site where the plaza will be built.

The Fairchild Place building is now completely demolished from the ground up, and most of the debris has been removed. Across from the site, on Onondaga Street, the shrub forest has been significantly trimmed in preparation for cleanup, the removal of buildings, and, ultimately, the creation of a mixed-use plaza.

Ellicott Development owns the property and buildings on the corner of Center, North Eighth and Onondaga streets where the plaza will be located.

The Buffalo-based company submitted a brownfield cleanup program application to the New York State Department of Environmental Conservation. Some portions of the 1.4-acre site are contaminated, and Ellicott Development seeks to take advantage of personalized income tax credits in exchange for remediating the soil.

Additionally, the property's middle building has a sign stating asbestos-containing materials will be removed from April 17 until May 31.

Village of Lewiston Projects Coordinator and Liaison W.E. "Skip" Hauth said, "I believe that they (Ellicott Development) are getting their abatement ruling, the documentation they need for their abatement, on the 17th. (It) should give them the authorization to move ahead with that, in combination of their ensuing plan for being able to start the demolition of those buildings. Obviously the abatement has to happen first."

Observing the past reports on this subject, Travis Proulx, a spokesman for Environmental Advocates of New York, said, "The goal of the brownfields program was always to clean up harmful contamination and get these sites back on the tax rolls. It lost its way, though, and ended up a taxpayer-funded giveaway to wealthy developers. In 2015, Gov. Cuomo and legislators passed several sorely needed reforms to place the focus squarely on cleanup. It's a great start, and as more projects work their way into the system it will be important to keep an eye on the data to ensure it's doing as much good, in as many communities, as possible."

Hauth said, "A lot of what's been going on on the Ellicott project is removal of brush, removal of trees; there's still some of that to do. And then there's a lot of work to do to start grading out the area and removing some of the piles of materials that have been dumped on the site over the years. There's a lot of old construction materials there. Rumored to be that there are also materials left there from past operations that were on that site, including an auto garage.

"So, we want to get a good, clear look at what does the ground look like, before we start going through and doing sampling in the areas that they've already identified as needing to be remediated. They don't have enough there, based on what's been so far identified to define, for DEC's purposes, that this requires a brownfield remediation.

"That's good news, because it means the progress can move ahead fairly rapidly, rather than waiting for the give and take that always goes on with DEC. I think that the process that they're on now, I suggest, means they are still some three to four weeks away from starting to do things that are really starting to look like construction, as opposed to looking like clearing and demolition. We'll have a better assessment for that probably in a week to 10 days."

Meanwhile, Hauth said, "I believe that we are about to go into the next round at Fairchild, which will include digging up the foundations, digging up the cellar materials that are there, clearing that out, and then providing backfill and tamping the backfill so that we have a nice, stable platform on which to do the building."

Developer James Jerge owns the property and intends to build an apartment building and patio homes. 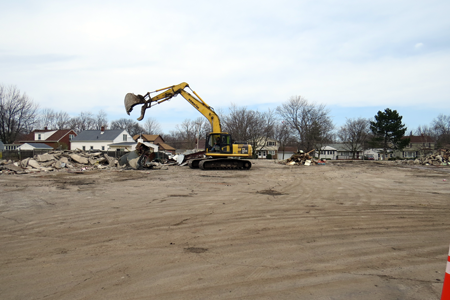 A look across the nearly empty Fairchild site.

At the Village Board's April 3 meeting, Sutherland provided an update on the village's emergency management plan.

"Myself, and the mayor, we both looked through and reviewed our current emergency response plan, dated Nov. 2, 2015," he said. "We've talked with Jonathan Schultz, the director of emergency services for Niagara County. We have a May 9 meeting with him to go over it some more. There are a couple minor areas in our emergency response plan that will be updated. We are planning on applying for a grant and looking for other monies to acquire a generator for this building, and radios, because this is the No. 1 emergency operations center in our plan."

Late last month, Planning Board member Claudia Marasco asked trustees about the protocol for protecting residents during periods of power loss or during other times of danger. She particularly expressed concern for seniors, those with young children, and others with special medical needs, who may be at greater risk when without electricity, or snowed into their homes.

Sutherland said the board would look into its protocols and ensure measures are up to par.

"Our emergency response plan is very good for major emergencies, or disasters, but it doesn't really cover the small ones that we have, like the power outage we just experienced (due to a windstorm)," Sutherland said. "Mr. Schultz is eager to help us with a plan for that. Short of that, I think we need to go forward with information and requests to our residents to provide their names, addresses and cell and home phone numbers, and then indicate what their needs might be."

"We already have applications in the Village Hall that people can pick up if they feel that they're in need of any extra help during such emergencies," he said. "They just fill that out. ... And it tells you what they need, may need, in the way of medication, lodging, what have you, if something comes up. And they put that yellow dot on their door, and it gives (contact information). The sheriff's department can share that with us, and our police department, and here in the Village Hall, so we are aware of those people out there that need some assistance in those smaller-type emergencies."

Sutherland added, "There is a plan out there, and it's pretty good. But we're going to improve it."

Marasco said, "I know that we'll be a safer community if we all know what's going on."