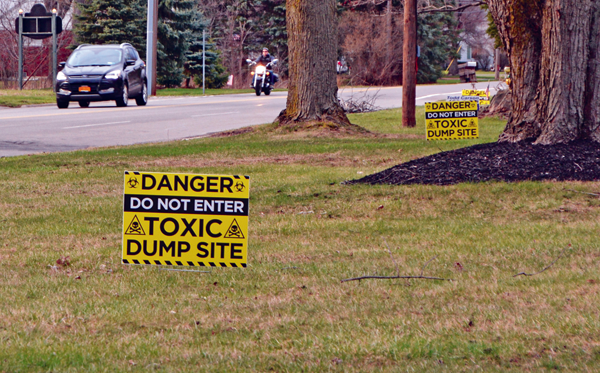 Signs placed on residents' lawns near the Niagara Sanitation Landfill warn of toxins.

More than 60 residents who live or have resided near the Nash Road Niagara Sanitation Landfill site are plaintiffs in a lawsuit against the Town of Wheatfield.

This lawsuit comes after several notices of claim were made to the town by residents of Forbes Street in North Tonawanda and the nearby area. Some of these residents had their properties tested through soil sampling last year, and the results indicated the presence of hazardous chemicals.

The municipal and industrial landfill was operated by Niagara Sanitation Co. from 1964-68. It is currently owned by the Town of Wheatfield.

The lawsuit states water accumulated at the site contains various chemicals. That water flows onto adjacent private properties and into the sewer system. It is argued the leaching of chemicals onto residential properties has caused residents to have health issues.

The lawsuit states the plaintiffs "suffer ongoing injuries, including significant health impairments and damage to their property as well as putting them at high risk for future, latent diseases and cancers."

The lawsuit outlines a series of reports from organizations such as the Environmental Protection Agency and the New York State Department of Environmental Conservation that alleges toxins were present at the site, and that, despite the information, no action to clean up the site was performed.

For instance, the lawsuit alleges residents of the adjacent community were not informed of the findings, nor were there signs warning them of the danger present. Therefore, they continued to use the unfenced site for recreational activities.

The lawsuit alleges the town neglected to add safety measures and warn residents of the danger of the site.

It also states the town "did not adequately control the landfill or properly segregate the chemical waste from regular municipal waste."

As of Tuesday evening, the town was not yet served.

"All I can say is we know it's been commenced," Wheatfield Town Attorney Matthew E. Brooks said. "We're waiting to be served."

He said he expects the town will be served in the near future, "and at that point, we'll really review it and plan a response. ... But until we get it, it's sort of a holding pattern."

In February, Wheatfield Town Board members agreed to designate nearly $80,000 of appropriated fund balance toward installing a fence around the landfill. New York State Sen. Robert G. Ortt also secured $75,000 in grant funding for the fence last year. The total cost of the fence has been estimated at $151,976.

The lawsuit requests the defendants pay for several things, including property damage, decrease in the value of their property, ongoing and future medical monitoring/costs of the plaintiffs and their families, a public program to educate people on the impact of the landfill as well as research into how to cure diseases related to the chemicals.

The DEC recently announced it will begin "a detailed environmental study" at the site.

It stated in a release it "will perform the investigation which will include the installation of monitoring wells and test pits to assess conditions on the site, and determine if any contaminants may be moving off-site into the residential neighborhood."

The DEC also stated the purpose of its investigation is to "define the nature and extent of contamination in soil, surface water, groundwater and any other parts of the environment that may be affected. The site investigation will fully characterize all contamination at the site."

Some of the harmful contaminants the DEC will look for include barium, lead, municipal waste, arsenic and mercury.

For the DEC's full statement on the site, as well as plans for its study, visit http://wheatfield.ny.us/DocumentCenter/View/1516.