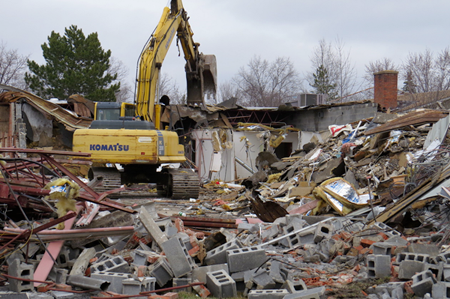 Portions of the former Fairchild Manor Nursing Home have been meticulously and efficiently torn down this week.

Trustees in the Village of Lewiston have met twice with Deputy Treasurer Edward Walker, and are finalizing a budget proposal for the 2017-18 fiscal year. As it stands now, the property tax rate is set to increase 8 cents, from $7.38 per $1,000 of assessed valuation to $7.46. Accordingly, a homeowner with a property valued at $100,000 would have to pay an extra $8.

The public can attend a meeting on Monday, following the 6 p.m. work session inside the Morgan Lewis Village Boardroom in the Red Brick Municipal Building, 145 N. Fourth St. It's unlikely trustees will allow comment at that time. Rather, a public hearing, where residents will be invited to speak, has been scheduled for the start of the 6 p.m. monthly meeting on Monday, April 17.

Trustees are expected to approve the budget that night.

Walker explained the tax rate increases are primarily the result of matters outside the board's control.

The preliminary total budget demand is $3,488,386, which is roughly $145,000 more than the current budget demand. The largest items contributing to the higher figure include: health care, which is up 13 percent (around $20,000); more than $30,000 in anticipated installment payments for a new Department of Public Works truck; $10,000 more for Lewiston No. 1 Volunteer Fire Co. via a new contract; and salaries, which will rise 2.5 percent for union workers and 3 percent for salaried employees. (Collectively, the Village Board will receive about $1,000 more, while the clerk's office, legal and engineering costs are set to decrease.)

Niagara County is charging more for water, which requires the village to ask residents for an extra 5 cents; and the village is one of the local municipalities contracted to fund a new Water Pollution Control Center building, thus facilitating the 5-cent sewer rate increase.

Total revenues are tentatively projected at $3,407,174. To balance the budget, a fund balance transfer of $81,212 would be required.

Last year, Walker forecast a fund balance transfer of more than $166,000 to balance the 2016-17 budget. As it stands now, however, he said the village will not need to tap into its almost $1.5-million bank account. Projected expenses have come in under budget through nine months, while revenue is lining up as predicted.

Walker said the state of New York informed the Village of Lewiston last December the tax rate could be raised 1.15 percent. This state constitutional tax rate is based on the cost of living index.

The village tax rate of $7.46 would mean about $14,000 in additional revenue for the municipality.

There was no tax increase for 2016-17, as the village could only raise the rate by 0.0012 percent - or 1 cent. Trustees said such an increase wasn't worth the time it would take to be implemented.

The next fiscal year begins on June 1.

Demolition Ramps Up at Fairchild Site

A demolition crew is wasting no time tearing down the former Fairchild Manor nursing home site's Onondaga Street side.

An entire wing was removed on Monday, and enormous piles of metal, concrete, wood and brick were sorted and removed on Tuesday. A second wing was started on Thursday.

The scene on site could best be described as a real-life, machine-driven "Jurassic Park." A giant, dinosaur-like Komatsu PC 200 LC hydraulic excavator has ripped and chewed and foraged its way through the building wings. The digger's giant jaw roars as its teeth sink into the mechanical meat.

As fast as the crew tore down the first wing, it was equally speedy in working to remove the debris piles on Tuesday, Wednesday and Thursday. 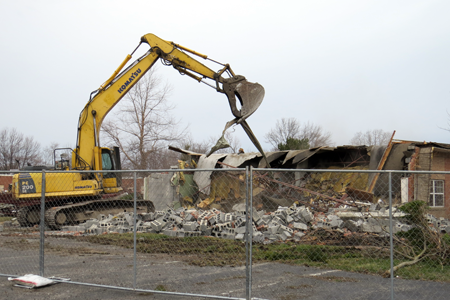