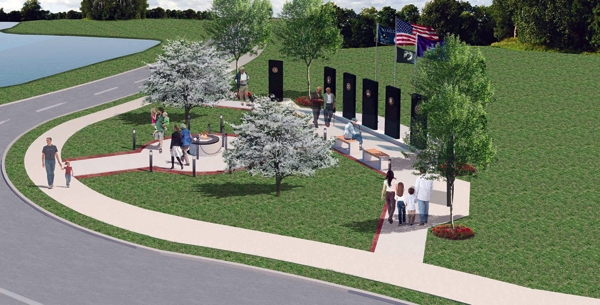 Shown is a rendering of an aerial view of proposed additions to the park, including an ice rink, common area and other amenities. (Rendering by Clark Patterson Lee)

More amenities are on the horizon for the Town of Niagara's Veterans Memorial Community Park. Some changes will come as soon as this spring and summer, while others are being looked at for the future. Many of the plans focus on offering more family-friendly activities that can appeal to people of all ages.

During the spring and summer months, visitors can expect to see construction begin on the remembrance square veterans memorial, Supervisor Lee S. Wallace said. Power at the park is also expected to be installed soon, allowing the facility to be lit at night "so we will probably extend the hours, especially in the summer, now that there will be lighting over there ... with our concert series," Wallace said. Also, a splash pad has recently been installed at the park. However, landscaping is still to be completed around it, Wallace said.

Currently, the Town Board is formulating a plan as to how to phase-in additional improvements to the park.

"There was a lot of discussion about where we wanted to go down the road with this," Wallace said. "And the idea is to try and get the most bang for our buck without a lot of operation and maintenance cost."

Wallace explained that, before he became supervisor, the town's previous administration planned to build another, much larger building in the park.

However, he said this board has decided to go in a different direction, and no longer pursue the idea of another building, because of the high cost factor relative to possible reward.

The board tried to come up with other ways to attract people to the park all year-round. Although there is an annual Halloween week held in the fall and Christmas activities in the winter, councilmen are looking for more ways to use the park during the colder seasons, as well.

"That's where the ice rink comes in," Wallace said.

He said the board believes an outdoor rink would be a positive addition to the park during winter months, increasing traffic to the park and providing people with more activities during that time of the year, in conjunction with "Noel at Niagara," which will include the lighting of the park during the holiday season.

Plus, Deputy Supervisor Charles F. Teixeira said, "ice time is always in need," and there has also been a growing interest in curling, as well.

"It would be a place for people to go where we could have music, have a skate night or you could still rent it out in off times to other people," Teixeira said. "You can divide the ice in two sections and have one half where people could do curling or they could do other activities on the ice."

Wallace said board members have had numerous discussions with Town of Lewiston Parks and Recreation Department Director Michael Dashineau about Lewiston's outdoor rink, and have taken the feedback into consideration.

The cost of the rink has been estimated at approximately $600,000. However, like all the other park improvements, the rink would be paid for with Greenway money, not taxpayer dollars.

There has not been a tentative date on when the rink would be brought to the park, or which phase it would be included in.

"I don't know where that comes yet," Wallace said. "We haven't gotten that far."

Besides the rink, another idea for the park includes a miniature golf course, which requires very little maintenance and would cost approximately $350,000. It, too, would be paid for through Greenway funds.

Wallace said one of the goals for the park is to try and offer not just activities for youth, but for the whole family, as well. He said both the miniature golf course and the rink are not "pigeonholed" to a specific group.

Teixeira said, "Putt-Putt golf is something that pretty much anybody can do. Seniors can do it as a group; they can do it with their grandkids. ... And they don't have to be good at it. It's something that brings people together. It gives young kids somewhere to go on a Friday or Saturday, somewhere to hang out safely and be able to do something. And there's not many around here. So, I think it would be a good draw for many different ages."

Another idea for the park is to create a common area for visitors, which could include a clock tower, a fire pit, concession area, bathrooms, sitting area and other offerings.

"It will be like a common area for people to congregate throughout the year. That's family-oriented," Wallace said. "What we're trying to do is create a variety of activities that won't cost us much after the initial build and also will appeal to a variety of people."

The bigger ideas, including the rink, miniature golf and common area, have been approved on the park's master plan, "But it is also a working document, which means it's not etched in stone," Wallace said. He said changes can be made to plans, and conditions can be set in the future.

In addition to the bigger items, softball fields have also been proposed for the park, which may be further addressed in the next year or so.

"There's 125 acres over there," Wallace said. "So there's plenty of other space for greenery and we're not going really past the pond. Most of it is west of the pond."

Councilman Samuel S. Gatto said, "Our goal is to bring more family-oriented activities to a small portion of the park, while keeping most of the green space untouched to preserve the integrity of the park's original intent."

Park improvements began with plans from the town's previous administration.

"The Senior and Youth Activity Center is where many of our seniors gather and many youth activities are conducted there, as well," Councilman Marc M. Carpenter said. "We also provide a place for our residents who may want to rent our facilities for their own personal party activities, too."

Phase one also included building a storage garage, adding baseball diamonds, and enlarging the Elmer's Pond area and stocking it with fish.

Carpenter said he hopes future improvements will "continue to expand and enrich the quality of life for all our residents in our great town."

"We're looking for things that are going to bring the community together," Teixeira said. "Because, when the residents decide where they're going to live, they look at the schools, they look at the taxes, what is there to do in the community? What does it have to offer? And we're trying to provide the environment that the community will be proud of and want to go and interact with their community and say 'This is where I'm from' and have activities to do."

He added, "As an elected official, you got to consider your constituents or your residents - do they just want to live here because it's close to the thruway, or do they want activities that we could provide for them, also?"