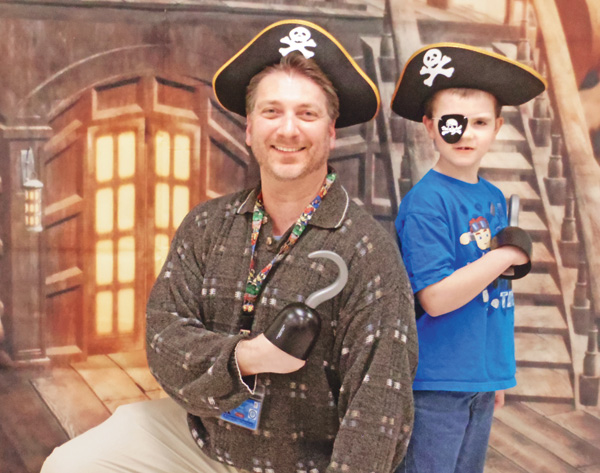 Mark Gorton, left, and Matthew Eggers are the Dynamic Duo, both named honorary survivors for the 2017 Grand Island Relay For Life. (Photo by Alice E. Gerard)

Mark Gorton, an audiovisual technician for the Grand Island school system, and Matthew Eggers, a second-grader at Huth Road Elementary School, have been named as "Dynamic Duo," who will serve as the honorary survivors in the 2017 Relay For Life, scheduled for 4 p.m. to midnight on Friday, June 9, at Veterans Park.

The theme of this year's Relay For Life is pirates, who "set sail for the treasure of a lifetime." The announcement was made at the Relay For Life kickoff, which was held on March 16 at Veronica Connor Middle School. This year, Grand Island will hold its 15th annual Relay For Life.

In addition to announcing the honorary survivors, the 2016 award winners were announced. These include the Unsung Hero Award, presented to former co-chair Becky Sommer-Stufkosky, and the Crystal Award, given to Fresenius Kabi, for sponsoring the survivors' tent. Fresenius Kabi is a pharmaceutical plant located on Grand Island. The award was accepted on behalf of the company by Tony Pavel, Fresenius Kabi plant manager.

Tracy Schmidt, the mother of Matthew Eggers, told the story of her family's cancer journey. She said that, at the end of April of 2015, Matthew, who was then in kindergarten, "started showing symptoms," including shortness of breath, night sweats, and leg pains. "He fell a few times at school," Schmidt said.

"I knew that there was something wrong with him," Schmidt said. She took him to Women and Children's Hospital in Buffalo. "He couldn't breathe. He was trying to take his seatbelt off." At the hospital, Matthew was tested and was found to have two masses, which included a tumor that was "wrapped around his windpipe."

"Your child has cancer. These are the words that no parent should hear. We were terrified. Matthew said, 'Don't cry, Mommy. It will be OK,' " Schmidt related. "That was when our cancer journey began."

Matthew was diagnosed with Burkitt lymphoma, a form of non-Hodgkin's lymphoma. It is a very aggressive cancer. "It had to be treated quickly," Schmidt said. Matthew had 12 rounds of chemotherapy, as well as treatment in the base of his spine. He missed the second half of kindergarten, summer break, and the first half of first grade during his treatments.

"Wonderful nurses and doctors made the battle easier," Schmidt said.

The other half of the Dynamic Duo, Mark Gorton, said that he was surprised to receive the title of honorary survivor. "I didn't think that I'd suffered enough. In 2004, I was bouncing around jobs. My wife Debbie and I were feeling fatigued, so we went to the doctor. He checked our thyroid levels. My wife was fine. He looked at me and said, 'Oh, that's interesting.' I had a cold nodule. It was fairly contained."

It is fairly common to have a thyroid nodule. According to endocrineweb, 50 percent of the population has thyroid nodules. Of those, just 5 percent are malignant. Gorton went to Sisters Hospital in Buffalo, where he had surgery.

"I didn't know that I had cancer until my surgery," he said. He described the surgeon, Dr. Razack, as the "king of the thyroid."

"A couple of weeks later, I went back to work. I had no radiation and no chemo. The doctor got it all during surgery. I had to keep going to follow up appointments. After Dr. Razack retired, I saw a new doctor, whose bedside manner was rough. He gave me the worst-case scenario, when he told me, 'We could hit the vocal cords.' My voice is me. I couldn't leave the office any quicker. I was devastated,' " Gorton said.

Gorton's family suggested he seek out a second opinion, so he went to Roswell Park Cancer Institute, where he was told that the surgeons used a nerve monitor. He related that the doctors at Roswell Park let him know that they won't cut the vocal cords.

In May of 2007, Gorton had a follow-up procedure at Roswell Park. "They took 10 lymph nodes. One was suspicious," Gorton said. He is now in remission and goes to Roswell Park for annual checkups.

"There is always that fear," Gorton said. "Cancer never sleeps."

Gorton talked about the people for whom he is grateful. "I am honored to share this with Matthew. I am inspired by him." He thanked his wife. "She is my caregiver. She washed my hair when I couldn't get my bandage wet." He told the audience, "I love all of you for being part of this Relay family. We salute survivors and thank you for giving us hope."

•Bronze level: King of the Wing, Huth's Heroes, and Stomp It Out

Relay For Life awards went to:

•Best Team Theme: To the Moon and Back