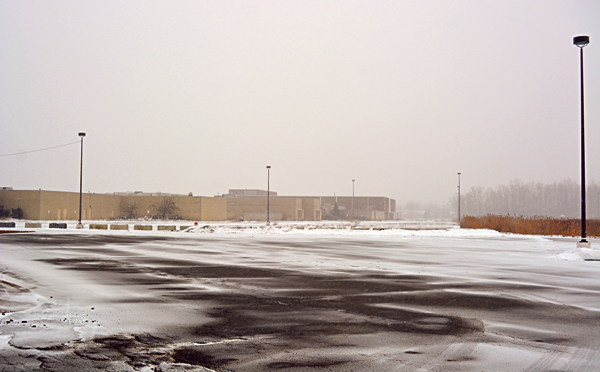 Shown is the back of The Summit Mall property, where the domes are expected to be placed.

The Niagara County Industrial Development Agency will hold a public hearing at 3 p.m. Thursday, March 30, on whether it should provide tax breaks to Summit Outlet LP for its proposed sports domes project at The Summit Mall property. The hearing will take place at the IDA office at 6311 Inducon Corporate Drive in Wheatfield.

The mall's owner, Zoran Cocov, is seeking a 10-year property tax abatement as well as a sales tax exemption on building materials and equipment for the construction of two 96,000-square-foot sports domes. The domes are set to be placed in the rear parking lot area at the east side of the mall.

Cynthia Potts, operations manager of Summit Outlet LP, said 14 full-time and 60 part-time jobs would be created with the domes project.

Summit Outlet, LP's application, provided by the IDA, states the mall at 6929 Williams Road has been mostly vacant since 2009 and has since been vandalized. The application stated approximately 85 percent of the roof top heating, ventilation and air conditioning units and 80 percent of electrical wiring was taken from the mall.

The application stated returning transformers to the site to re-energize the building is "very costly, although we are close to completing what we need for the domes and the interior supporting areas." It further stated, "We are seeking assistance and tax abatement help with erecting the domes, which we believe is the first step to begin the revitalization and repurposing of the mall. Without financial assistance, it will take years for the domes to be erected, operating and sustaining themselves, driving the resurgence of the mall and new opportunities within."

Currently, the small is home to three stores: Sears, Bon-Ton and Save-a-lot. However, Save-a-lot is slated to close by the end of the year, Potts said.

The IDA's project summary states Cocov aims to repurpose the mall structure with multiple project phases conducted over the next five-10 years "to create a community center destination for local families as well as bringing in sports programs from other areas."

In total, project costs are estimated at $7.3 million, according to the IDA's application summary.

"Any support the county may offer will help move the project(s) along faster, and help the long overdue renaissance begin, will be greatly appreciated," the applications states.

The domes, included in the first phase of the project, are estimated to be open this fall, Potts said.

They would house multiple indoor fields and courts for sports, including baseball, soccer, volleyball and basketball.

During the sports' off-seasons, the domes are planned to be used for trade shows and conventions to continue to bring traffic into the area, the IDA's project summary states.

Besides the two domes, renovations and the repurposing of approximately 48,540-square-feet of the inside of the existing mall structure are planned. The areas to be transformed formerly housed movie theaters and a York Steak House Restaurant.

To access both the sport programs area and the domes, visitors would be required to enter the front entrance of the mall on Williams Road. People would then walk through a food court to access the sporting facilities, the application stated.

Before construction can begin on the domes, the applicants must meet the town's engineering requirements.

Last May, the Wheatfield Planning Board approved the dome project's site plan, contingent on the town's engineering requirements being met.

Potts said the applicants have some final drawings "that need to be completed for review/submission" and that they will be ready to be presented "most likely in the next month or so."

In addition to sports project, a brewery, bar and restaurant project were proposed for the mall by Big Thunder Brewing Co. in January.

At a Wheatfield Town Board meeting, John Robinson of Ontario, Canada, a principal of Big Thunder Brewing Co., said the project would cost approximately $3.3 million.

Last month, the Town of Wheatfield Board members agreed to submit a state grant application for $750,000 on behalf of Big Thunder Brewing Co.

Approximately 50 jobs are expected to be created with the project.