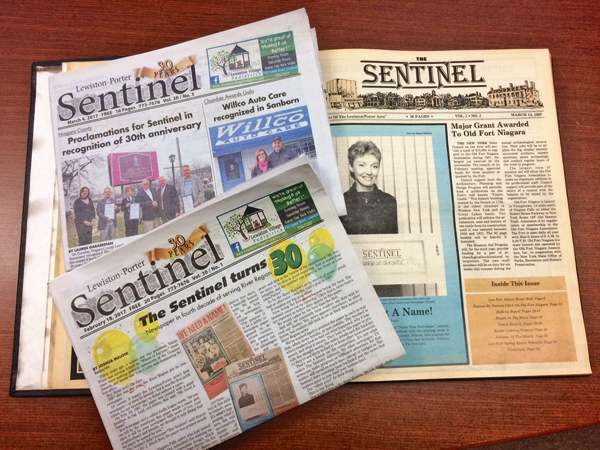 In 2017, it's easy to have a public voice. There's little skill, experience or cash required to start a blog or post notes on the internet.

If you really want a challenge, try starting a newspaper.

You'll need a staff, computer equipment to design the pages, money to print the paper, workers to deliver it, and businesses to purchase advertising to fund the operation.

Oh, and if you're lucky, people will want to read what you're writing.

Those same requirements and challenges existed 30 years ago.

While print is still a viable medium, it was even more so in 1987, when The Sentinel debuted. Still, that didn't mean starting a River Region newspaper was a sure bet, or that it would succeed. Other publications in the Lewiston-Porter area had not been well received.

So why start a newspaper?

The Sentinel recently caught up with Michael Linenfelser, the newspaper's first advertising rep, and Joelle Logue, the editor who so eloquently laid forth the newspaper's goals and code of conduct in the very first issue. Also shedding light on the matter was Skip Mazenauer, The Sentinel's first and only publisher. What follows are selected answers from three separate interviews.

Mazenauer's parents started the Grand Island PennySaver in 1944. He purchased it in 1978, and soon after acquired the Island Dispatch. In 1985, Mazenauer branched out to Niagara County with the addition of the Niagara-Wheatfield Tribune.

Q: Skip, you had three newspapers at the time The Sentinel was launched. Why add a fourth newspaper? And why was the River Region the right place to go?

Skip: The River Region always intrigued us. We could see the potential market. The Lewiston Business Association, before they formed a chamber, had decided that they wanted to have a weekly newspaper. They had experienced some previous weekly and semiweekly newspapers; most of them were more politically motivated.

So, they decided to ask for proposals. They asked us and three other groups. We made our proposals to the board of directors that was being led by Sam Sperrazza.

I remember the call very well. He called me up one evening and he said, "We have some good news, and some bad news." The good news is they chose us. The bad news is they had enough money in their treasury to buy one half-page one time. And then we were on our own.

We came up with a concept through our staff. We had a very talented staff at that point - like we do now - and the idea of a contest came up. Hence, "Name Our Paper."

Q: Were the business owners glad to have a newspaper and a platform to announce their news and events?

Skip: Definitely. There was almost a sigh of relief that there was somebody there that could help them carry out their messages and promote their businesses.

We had a space in there that we really had to prove ourselves. I think we really did a good job because, in our group, that's our strongest paper that we have.

Q: You couldn't know how well a fourth paper would do. Does it surprise you The Sentinel is the most successful? What is it about the paper that has made it so popular over the past 30 years?

Skip: I think we were able to zero in right away on the needs of our readers. And the business community was really looking for something. And the other thing that really helped a lot was our staff - many members of our staff got involved with the community, joined the business association right away, were very visible at the school sports/school events, very visible at the other social events. That led to the acceptance of the paper very quickly.

Q: Did you ever think you were over your head with a fourth paper? Or did you just believe in yourselves from the beginning?

Thinking back on it, I would probably scratch my head a couple times. Yes. 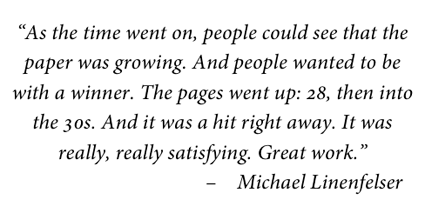 Linenfelser served as The Sentinel's ad rep until the beginning of the 1990s. He developed a working relationship with the business community that still exists today.

Q: What was the challenge and what excited you about starting a new paper?

Michael: It was a great crew that we put together. And it was a challenge in that there was nothing there before. I remember I had to start out selling the advertising in the middle of winter. And to do that in Lewiston, a summer town, was really not easy. It was a little quiet on the streets, and I had to go out and pitch this.

So that was a challenge. But I remember I would have a sales pitch. I just would go to the people at the businesses and say, "You don't know me, and I'm not from this town, and I'm selling you something that doesn't exist right now. But we are here to try to give you a hometown paper for the Lewiston-Porter area for the first time."

And so, it was well received. Because the people, the businesses, wanted something. They had the Metro, but never a real, true community newspaper.

I sold, I believe, 13 signed, because it went every other week. And I got a really nice base from that. And then as the time went on, people could see that the paper was growing. And people wanted to be with a winner. The pages went up: 28, then into the 30s. And it was a hit right away. It was really, really satisfying. Great work. ...

I worked really closely with Joelle, who was the editor, and I was on the street, so I got a good feel for what was happening, talking to the businesspeople everyday. And I also ... had a camera and would just nose around - take local pictures of what was happening seasonally; that type of thing. It was a great kinship between the editorial staff and the advertising, which, in papers generally, doesn't happen. Generally they're divided. It was a beautiful mix, and it worked beautifully.

"She was really the catalyst for the beginning," he said.

Logue was at NFP for more than a decade. She then went on to work for other newspapers. Following her journalism career, Logue became a traveler and an advocate. She's currently on the state board of Planned Parenthood, and serves as the chairwoman of the Erie County Commission on the Status of Women, and the secretary of the worldwide YWCA service council.

Joelle: At first I was not excited about another paper, because to do the PennySaver and the Grand Island Dispatch in a week's time is difficult enough - if you're going to do it well. But, it turned out that Mike Linenfelser was really the glue to this Sentinel. He went pounding the pavements out there in Lewiston. He developed a great rapport with everyone. And I had been to a couple of the business meetings. Sam Sperrazza was really excited about starting a paper there.

And, luckily, we started off well. It wasn't every week. And then Skip did permit extra hiring of reporters, because I told him.

Actually I've been the first-time editor of seven newspapers in my career. One of the things I'm a stickler for is not having fill. I didn't like fill - stuff that you find everywhere - to be in those papers. I wanted it to be truly unique to that community. And I think we pulled it off, mostly because Mike had the ear of all the businesspeople. Through them, and just his general way of talking to people, and being interested in people, the stories came.

(The area) has a wonderful charm and a history to it. That was the real kicker for me, was the fact that it was an area that had a lot going for it, in terms of its history; the Underground Railroad; the charm of the village itself; the uniqueness of it - which still exists today. That was my excitement about starting The Sentinel. ...

It became probably one of my most favorite newspapers that I've been the first editor of. I really attribute the bond between me and Mike, and our love for that area, as the real key to making it a success from the beginning.

People really welcomed it, as you say they do today.

Q: Thirty years later, the paper you started is the most popular in the River Region. You laid the groundwork for what The Sentinel is today. Does that give you a sense of pride?

Michael: I sold advertising for, I believe, five different papers. And it was the best time of my career - was the years that I worked for The Sentinel. You were doing more than just selling ads. You were working with the community. I was on the board of directors for the business association for two terms. And I was a part of that group, very strong; they were happy with the product. I was working with the schools. With the Town of Lewiston. Getting different kinds of reports out of them.

It came together real well. I believe we won an award from New York State Press in the second year. ... Which we knew it was big and it was hot right from the beginning. It was just a great success. It really was.

We had a great logo on the first issue. It had Artpark on the left-hand side. It had the castle from Fort Niagara on the right. In between the two were Center Street buildings. And then "Sentinel" on top of that.

The logo was real classy looking. The paper came across as looking like it was established from day one. It really took off nicely. ...

I'm totally proud of it. I hear that it's still the paper in the area. I have a brother-in-law who has a business in Youngstown. They can't say enough about the paper. So, I'm really proud.

Joelle: I think it's awesome. I think it's absolutely awesome. And that's a credit to the people who kept it going, and to Mike, who really was the glue in the beginning. I mean, Mike put his whole soul and body into that. ...

I'm so glad that it's still going today, and it's so well received. That's terrific. And actually, like I said before, it was one of my favorite papers that I helped launch, in terms of editorial content. I feel really good about it.

Q: Joelle, I love the way you prefaced the idea of people naming the paper, because it was going to be their paper, and they should be the ones to name it.

We really had the support of the business community. They had a buy-in to make it successful. I think working closely with them was also key to its success - not just for the money, but just for the pride in the community over the paper.

Q: What were your expectations for the paper? How successful did you think it could be?

Q: Skip, where do you think you'd like to see The Sentinel go as it enters year 31?

Skip: First off, we want to continue expanding its digital presence. After that, we've looked at the other parts of Niagara County. There's probably two other areas that we've identified that a sister paper might be the one for that. We feel at this point that that would probably be the better way to go than merge it with The Sentinel, because that would start to dilute too much of the news.

We really want to stay local local. That was our whole theme in the beginning, and that will always be our theme.

Lauren Garabedian contributed to this report. 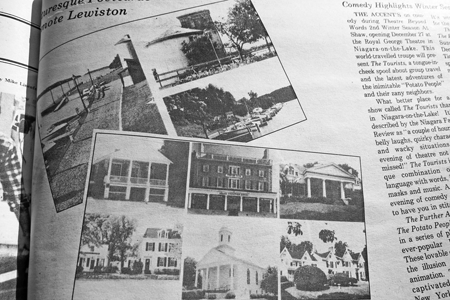