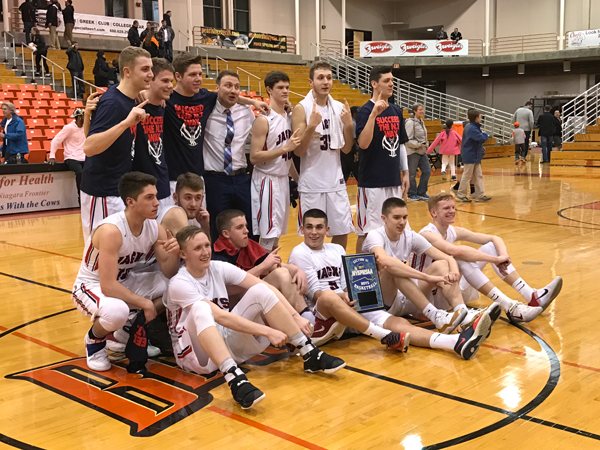 The North Tonawanda Lumberjacks celebrate their victory over the Amherst Tigers.

On Dec. 30, the Amherst Tigers got the best of the North Tonawanda Lumberjacks, defeating them 49-45. On Tuesday, when the two teams battled again for the Section VI Class A title, it was a different story.

The Lumberjacks defeated the Tigers, 58-51, punching their ticket to the program's first regional playoff game vs. Section V.

"We were very fortunate to win both games," NT coach Ryan Mountain said. "To go in and beat those two great programs (Williamsville South and Amherst) is just a testament of how our kids work."

Offense was a key factor the second time against Amherst. Mountain said his team improved from the last time it played the Tigers.

"We shot 27 percent against Amherst the first time we played them, our lowest shooting percentage all season," Mountain said. "It was mainly because of Amherst's defense. They're outstanding. It really slowed us down; we couldn't get out and run. Fortunately, we were able to run and get some easy baskets, so that didn't really affect us. Plus, it was on their home court."

The first quarter was back-and-forth. The lead changed five times and the score was tied three times.

Trevor Book's 11 first quarter points fueled the Jacks offense, but the score was tied after one quarter, 15-15.

The Tigers missed an opportunity to grab the lead late in the first. A technical foul was assessed to NT after a personal foul had already been called. Amherst made two out of four free throws, and didn't score any points when the team received possession. A possible 7-point turnaround ended with just 2 points for the Tigers.

Book started the second quarter by draining his fourth 3-pointer of the game. This gave NT the lead for good.

He finished the quarter my sinking a layup and getting fouled on the play. He made the free-throw to convert the and-one opportunity, and the Jacks went into the half up 33-25. Book had 19 points by halftime.

In the third quarter, the Jacks continued to be dominant.

Vincent Tripi drained a 3 to begin the half and fuel a quick 10-3 run for NT.

Tripi and Book both chipped in 6 points in the third to help the Jacks extend their lead to 15, 49-34.

Out of a timeout, Alex Quinn put the game on ice after making an open layup and draining two free throws to get the lead back to 12.

The final was 58-51.When the horn sounded, NT players stormed out to the court to celebrate.

"Erik recruited me nine years ago to be his varsity assistant and JV coach, and I was blessed and fortunate to sit on the bench with Archie O'Bryan," Mountain said. "Archie O'Bryan affected this game tonight, because he gave me the confidence to coach varsity basketball."

Book, a junior, scored 25 points in the win to lead the Jacks. He passed NT alum Chris Woodard to claim 10th place for most career points at North Tonawanda with 730.

"It's a testament of how hard Trevor has worked," Mountain said. "I said, 'Trevor, this is why you worked thousands of hours in the last two offseasons,' " he said. "It's ... to shine on this kind of stage, and he did tonight." 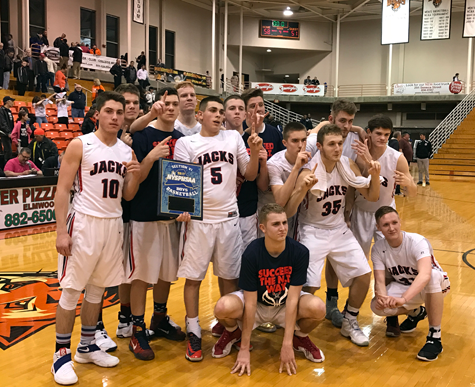