As it turns out, Village of Lewiston Mayor Terry Collesano was too modest in his update on the New York State Department of Transportation's plans to add crosswalk markers on Center Street.

Speaking at the Feb. 21 board meeting, Collesano explained he met with DOT representatives, and five crosswalk signs would be replaced.

Misunderstood last week was that Collesano meant a total of five new signs would line the historic road. Not the 54 neon signs originally pitched.

Apparently, the mayor is quite the negotiator. 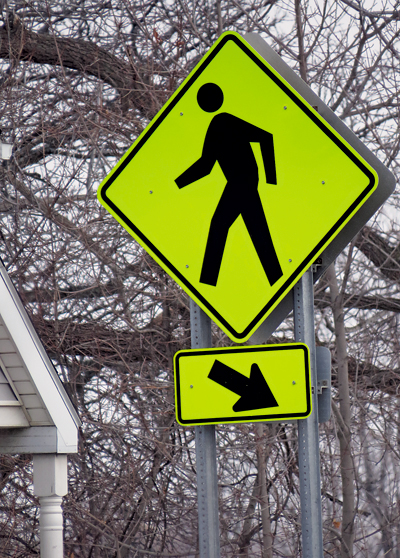 Working alongside a member of New York State Sen. Rob Ortt's office, the mayor said he explained the village's historic character. He reminded DOT officials the state agency and the municipality worked together in 1994 on the Center Street streetscape. That project resulted in a narrowing of the roadways to make room for new curbing, brick walkways and other aesthetic improvements.

Moving forward, both sides will again work together.

Deputy Mayor Bruce Sutherland said, "It's almost a remove and replace all the way." He said the DOT will be "Updating what's there and replacing. ... There will be no signs where there are lights, but there will be new visibility paint at each crossing, on the cement part - not on the brick."

Collesano said, "The biggest thing is the (addition of pedestrian-crossing) striping on the streets. And I also talked them into putting the arrows on the turn lanes. And the bicycle signs that are on the streets, they're coming out, and they're going to put them on the roads."

Both Collesano and Sutherland said that, once the DOT reassessed the historic nature of the village, the conversation turned. Both parties sought to find ways to protect pedestrians while enhancing the roadway - and not detract from streetscape.

The Village of Lewiston has worked with the Lewiston Police Department in recent years to educate motorists on crosswalk safety. The two groups have partnered to remind residents that walking traffic has right of way at the brick and striped street markers: in front of the entrance to the Niagara Scenic Parkway (just past Tops); at the corners of Center and Eighth and Center and Seventh streets; adjacent to the Stone House, the Spicey Pickle and Apple Granny; and on the corner of Center and Water streets.

In addition, the Board of Trustees voted Feb. 21 to submit a home rule request to the State Senate and State Assembly enabling Ortt and Assemblyman Angelo Morinello to each present bills that, if approved, would lower the Center Street speed limit from 30 miles per hour to 25 miles per hour.