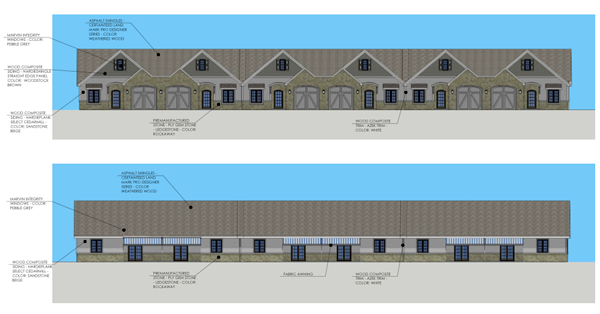 Pictured is an artist's rendering of the Fairchild Place apartments. (Images courtesy of Carmina Wood Morris)

With little resistance from the public, trustees in the Village of Lewiston on Monday unanimously approved James Jerge's plan to build apartments on Fairchild Place and Onondaga streets.

The motion to approve Jerge's development plan was made by trustees Nick Conde and Bruce Sutherland.

Attorney Marc Romanowski spoke on behalf of the applicant. He was the third partner from the Buffalo-based law firm Hopkins Sorgi & Romanowski PLLC to address the Village Board on this project.

"As the board's familiar with, this is a redevelopment of a former nursing home parcel," Romanowski said. "It's going to be demolished and redeveloped into a 30-apartment unit in a two-building complex: One, a multistory building complex; a second single-story complex in the rear."

"We think it's a great development. It's going to make a big improvement in this area," he added.

Trustee Vic Eydt thanked Jerge for his patience. The developer submitted almost a half-dozen different proposals - at the request of various municipal boards - prior to approval.

"This project has been going on and on for numerous times, and I appreciate - and the board appreciates - the work and time and effort that you've put into this," Eydt said. "And a lot of comments from the public at numerous meetings, specifically from people of Fairchild Place. I think this project is good for the area. It's good for specifically taking down (the current building) and starting new - especially with what we've got there."

Jerge said, "I'm going to come see (Building Inspector Ken Candella) in a couple of days, and get the permits. We took care of the asbestos over the summer time, so we're ready to go."

He noted Department of Public Works Superintendent Terry Brolinski would be advised on water and sewer plans.

Collesano went on to say, "Welcome to the Village of Lewiston. I'm excited about your project."

Jerge said, "We're looking forward to it also. ... Rest assured, we're going to put a great project there. There's no reason not to. We've waited this long, so we're going to make it special. Thank you."

The Village of Lewiston Planning Commission signed off on Jerge's development plan last month. The Zoning Board of Appeals granted the project six variances to the village code last October.

Jerge offered to work with the village on color patterns. Collesano and Eydt suggested Jerge implement unique garage and door colors and designs on the Fairchild Place units.

"We'll make sure that we're all in agreement that, 'Hey, this is a good color that we believe is going to work,' " Jerge said. He added, "As far as bricks and things like that go, I wanted to make sure that it's aesthetically pleasing for everybody in the village, not just the people in this room."

His project calls for a row of large trees in the space between the two buildings. Jerge said he would keep as many existing trees as possible.

"If they do work, and we can save them, we're going to save them," he said. "I'm a guy that knows you can't grow a 20-year tree in two days. If it's something we can work around, and it's not in our way, we're certainly going to try to (save trees)."

Trustees also approved a special use permit allowing Jerge to create 10 parking spaces on the Onondaga Street right-of-way in front of his three-story apartment building. Spaces exist there now, in front of the closed nursing home. A change of use required a new permit.

The new right-of-way parking spaces will be separated by green space, so as to not look like the current continuous slab of concrete. Moreover, the spaces will be public, and not tied specifically to the apartments.

In between the Planning Board and Village Board meetings, the number of right-of-way spaces grew from eight to 10. Project engineer Christopher Wood, a partner with the Buffalo-based Carmina Wood Morris, said this change was to offset spaces lost to the placement of a Dumpster.

The trash receptacle will be situated in between the two buildings, at a distance Wood said was in compliance with the municipal fire code.

There was talk at the Planning Board meeting of moving the Dumpster closer to Onondaga Street. However, Romanowski said it was his interpretation of the village code that the Dumpster "really can't (be placed) anywhere else but there."

He said the Dumpster would be screened "from most public views. So, we think that's probably just the best solution that we're going to have in this case."

Before approving the Fairchild proposal, the Village Board unanimously voted to issue a negative declaration on the project's related State Environmental Quality Review.

Engineer Mike Marino said, "We have not identified any potentially significant environmental impacts." He noted the applicant agreed to offset four times the amount of wastewater the project will add to the municipal sewer system.

Trustees held public hearings on the overall project and the right-of-way special use permit prior to the start of the board meeting. Only one resident spoke, and advised the village to be consistent in its requirements for apartment complexes.

Collesano told the audience the Fairchild project "is going to be fully taxed." He said there would be no abatements.

The Fairchild building was erected in 1964 and then expanded in 1970.