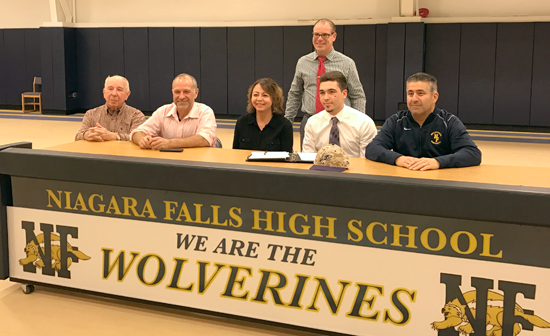 The future Purple Eagle, sporting a purple tie donated by his teammate, Pat Sisler, made his decision in front of his family, coaches and teammates.

With this signing, Grace will continue his baseball career and education at Niagara University for the next four years. He intends to pursue a degree in mathematics, because of his skill at the subject, and he said he hopes to have a future as either a math teacher or engineer.

Grace, a senior at Niagara Falls, is going into his third year as a varsity starter. In 31 games played, he has a .306 batting average to go with 16 runs batted in, two home runs and 34 runs scored. Grace also has had success on the pitcher's mound, going 6-3 with a 2.94 earned run average and 65 strikeouts.

"The school district and the baseball program are so proud of Matt," Contento said. "His hard work and dedication has led him to this Division 1 scholarship. I remember bringing him up as a sophomore, some great memories we've made, I still reminisce about the Lancaster game." Grace pitched the Falls to a win in the sectional semifinals.

Contento said Grace went on to become a leader in his junior year, and that bigger and brighter things will happen this year and he can't wait to see it all take place.

"I expect nothing less than what he's brought already," Augustino said. "He's the main position on the field at shortstop, and he's going to be our ace pitcher. I expect him to anchor not only our pitching staff, but also our batting lineup."

Augustino also labeled Grace as an "example kid" and someone other players can look up to.

"Since day one, he has shown leadership and intensity," Augustino said. "He's always leading the team through workouts, along with being the hardest-working kid, and he is the kind of kid you'd hope to be getting a scholarship. He's that example kid that shows the younger guys on the team how to be a ball player."

The decision to attend Niagara seemed to be an easy one for Grace - and it was also a nice feeling for his family, as well.

"It's a familiar school; the baseball team is up-and-coming. A lot of people I know are going there; the coaches are pretty cool; and getting offered a full ride is hard to pass up," Grace said.

"We grew up in the Falls, and grew up watching Calvin Murphy play for Niagara; always going to different NU games. And now we're very excited to be able to see Matt play there," they said.

There is much more to the family background for Grace. His brother, Adam, also played baseball at Niagara Falls, as a catcher before graduating in 2010. Adam was an all-state and all-region selection, as well as Niagara Frontier League first team winner as a Wolverine. He received a scholarship to play at Genesee Community College, where he spent a year. He then went to Erie Community College and Ashland University.

Linda Grace said, as a parent, to see Adam and now Matt sign to continue their baseball careers, she feels very fortunate and proud.

Matt said it's been his goal to advance his baseball career and follow in Adam's footsteps ever since he's seen his brother play.

Grace also had high praise for everyone who helped him get to where he is today as a person and player, notably past and current coaches, as well as family.

"I'd have to say thanks. I mean, everything that anyone does shapes who you are," he said.

Grace and the Wolverines will head into the 2017 season with the bar set high coming off a second-straight sectional finals appearance last spring.