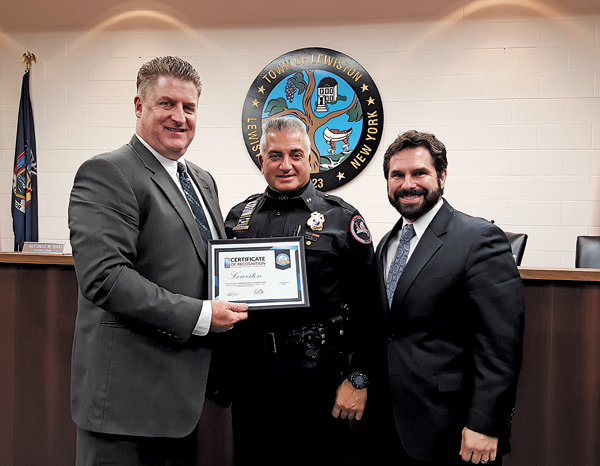 The Town of Lewiston Town Board moved on approving a number of procedural items en route to dedication of the Wolf Run roadway in the French Landing subdivision at its Monday session. But not before a few questions arose.

"All my fees have been paid; there's no outstanding invoices ... in connection with French Landing that have not been fully addressed at this point," Lannon said. "I believe as we sit here the PIP count should be zero."

Regarding any additional work, Lannon said some minor areas still needed to be addressed, necessitating additional PIPs to be issued - namely for sidewalks that would be installed by the developer as the French Landing project is completed, expected by July 2017.

"At that time is when we would go through and make sure all the concrete curbs are done, grading is done ... any other (infrastructure) repairs would be done," Lannon said, adding he was comfortable with approving the town dedication of Wolf Run.

"Per the closeout, when this (was) all approved (earlier), we talked about the requirement of a third party as-built survey being done. Just to verify, that topographically that everything was installed, the drainage was installed, the retention ponds were done as they were supposed to be done.

"Just to avoid ... this is what we didn't do at River Walk. ... We never had an as-built survey done after the fact to make sure what was built, was built per plan."

Conrad is the current chair of the town Planning Board and a former Town Board member who was in office when the French Landing project was approved earlier.

"We (the Town Board) talked about that endlessly when this was approved," he continued. "And I wanted to know if that was part of the as-built drawings that you received."

Lannon informed Conrad that, in fact, the third-party survey was not done - that the French Landing developers had handled it. "If you're suggesting that a third party surveyor go repeat that work, that's not been done," he said, adding it had not been required by the PIP.

Conrad, who was taken aback by the response, commented, "I preached this and preached this when I was on the board, that that was one of the things we needed to do, to make sure that we don't have a situation like River Walk. And you're not going to have that."

Supervisor Steve Broderick inquired if the Town Board's doing so would be considered "standard procedure."

Conrad replied, "Because of the history of what we had happen here (with River Walk), it should have been. I asked for it when I was on the board, that that (would be) part of it. ... It fell through the cracks.

"That was the drum I kept beating. ... You need somebody who's objective, to go back and verify these things. That is why the point was made."

"Be forewarned, of what could happen," Conrad said.

Town Council member Bill Geiben acknowledged the Town Board did not include any such provision with French Landing, suggesting that an arrangement could be included in the future as part of the town's dealings with developers.

Soon after, the Town Board moved on to unanimously approve the French Landing dedication of Wolf Run, as well as "hold as harmless agreements" with the developers. The roadway would be considered open for public use with the town responsible for maintaining it as it does for other roads in Lewiston.

Town Attorney Brian Seaman said any remaining issues - sidewalks, hydrants, the placement of stop signs, as well as those that may reoccur such as drainage, etc. - would be handled with the developer and that he didn't see any of these as a major concern.

Rotella said he was also pursuing funding with the Niagara Falls Bridge Commission for the Lewiston Police Department's vest program, and that he was pursuing an opinion from the state Department of Environmental Conservation for a kayak launch discussed for the Stella Niagara Preserve.

•Geiben reported that Woods at Blairville developers are considering four additional complexes to their current housing subdivision off Creek Road at Washington Drive. He then submitted a proposal that went on to be approved by the Town Board for the matter to go to the town Planning Board. Under consideration would be a change from R-2 zoning to Planned Unit Development for the lands being considered.

•The Town Board approved a request by the Recreation Department for the hiring of up to 50 seasonal workers for the Lewiston Family Ice Rink. Broderick said the Rec. Department expected to hire in the range of 30-35 workers for the rink, which was slated to open Friday evening for a 42-day season.

•Lewiston Police Chief Frank Previte advised the board of Lewiston's recent designation by Alarm System Reviews as the No. 3 "Safest Place to Live" in New York state. Last year, Lewiston ranked No. 25 of 30 "cities" in the state.

"I think it's a wonderful testament, not only to the men and women that work for our department, but the Town Board and Village Board's commitment to public safety. ... People move to Lewiston because it's safe," Previte said.

For the month of November, Previte said LPD handled 46 accidents, made 45 arrests and responded to 845 calls for service.