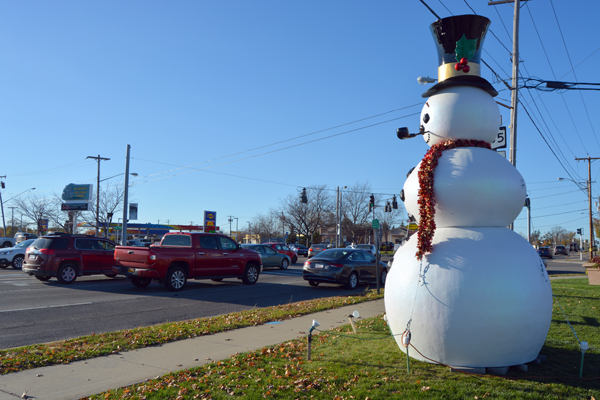 Frosty Niagara looks on at a bustling Military Road.

Drivers passing the corner of Military and Packard roads have likely noticed a new man in town.

Frosty Niagara, a 15-foot-high artificial snowman, has been installed to attract shoppers to the Town of Niagara's business district.

The Frosty Niagara project, presented by the Town of Niagara Business and Professional Association, is a new way to promote local businesses along Military Road and throughout the Town of Niagara, said TNBPA President Anthony L. Restaino.

Frosty Niagara is the largest snowman of many planned for Military Road, as local business owners purchased their own snowmen as part of the project to place on their properties, as well. Each snowman will be painted and decorated to reflect the business's offerings or theme.

Town of Niagara Town Clerk Sylvia Virtuoso said similar projects have been done in Buffalo, where decorated Buffalo statues were scattered throughout the city, and in Lewiston, where different scarecrows were placed along Center Street in years past.

"He's here because we are the busiest road in Niagara County with all of the international traffic from Canada," she said. "He is a welcoming entity for the street for the winter."

She added, the project is being "used more as a draw for people to come down in the winter months when business is usually slower than the summer months."

An Instagram contest will begin on Black Friday, Nov. 25, in which people can post photos of themselves with each of the different snowmen (with #frostyniagara) to enter into a contest to win a Visa gift card.

Photos will be reviewed by TNBPA members, who will select contest winners.

Restaino said he hopes the contest will encourage everyone to visit all the snowmen.

"With the social media campaign behind it, we're hoping it will get people to go visit the different snowmen at the different businesses and ... ultimately help businesses throughout the holiday season attract more people," he said.

Staffers of the Greater Niagara Federal Credit Union have already named their snowman "Cash" and plan to decorate it with fake money.

"It gives representation in the community," said Janelle Zasucha, head teller at Greater Niagara Federal Credit Union. "We're all about giving back to the community and it's fun ... and it gets our name out."

"And he will be painted all in the blues and whites of National Grid," Virtuoso said.

Restaino, as co-owner of Restaino Reddien, plans to name his "Will," as wills are one of his practice's specialties.

Restaino said the project is "something that we plan on doing year after year and it will, hopefully, only grow and build."

He said the TNBPA plans to announce the initiative earlier next year, possibly around summertime, to give more notice to other business owners who may wish to take part in the initiative.

"Hopefully we'll get a few more (businesses) to join in next year and we'll have snowmen up and down Military Road," Restaino said.

For more information, email the TNBPA at [email protected] or visit www.tnbpa.com. 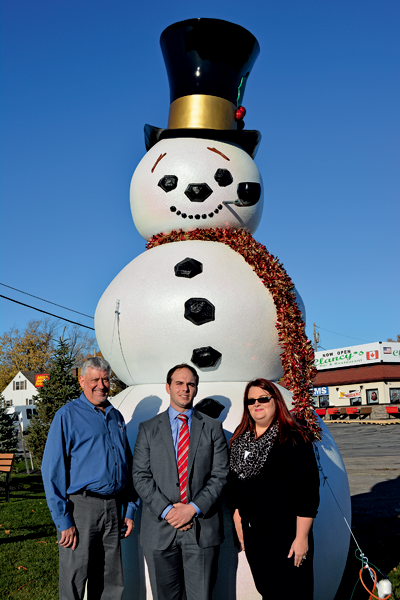 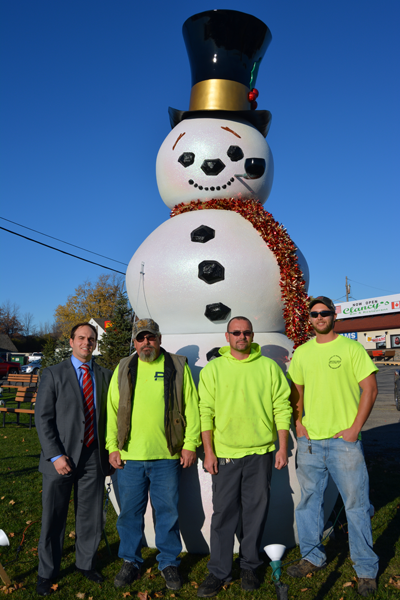