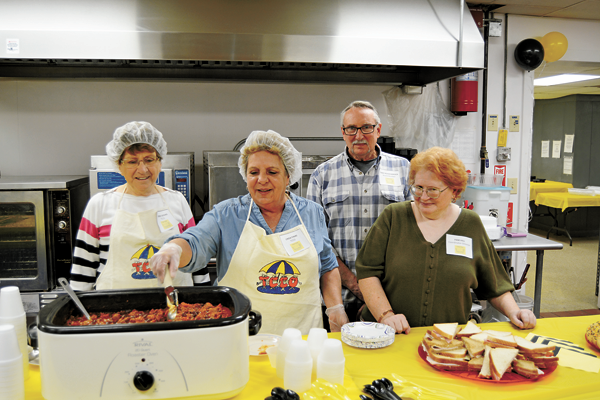 Delivering more than meals: Twin Cities Meals on Wheels recognized for service to others

Twin Cities Meals on Wheels, formerly known as North Tonawanda Meals on Wheels, opened its doors Saturday to reveal a new name change, as well as to give elected officials and community members an inside look into the everyday operations.

Twin Cities Meals on Wheels is a nonprofit, volunteer-based organization that offers nutritious meals to clientele who cannot prepare or obtain food themselves. Meals are delivered right to their home.

"We've been serving the Twin Cities since 1973," said Karl Bauer, president of Twin Cities Meals on Wheels. Therefore, he said, changing the name to refer to both cities will hopefully create more awareness across the canal.

"A lot of people in Tonawanda ... just don't realize that we're around," Bauer said. "As the population ages, our service will be needed more on both sides of the canal."

Ortt presented Bauer with a certificate of recognition for all the work the organization does for both communities.

"The mission of the organization hasn't changed at all and it continues on," Ortt said. "That's really the important thing."

Each day, volunteers deliver meals to clientele who live along nine routes throughout the Twin Cities. Clients have the option of getting one or two nutritious meals a day. Diabetic meal options are also offered.

Two cooks are on staff to prepare roughly 110 meals a day, usually within four to four and a half hours.

Volunteers also help in the kitchen by filling drink cups, packing bags, making sandwiches and arranging the meals for pickup.

Volunteers can range from students to disabled individuals.

"We deal with several of the agencies where we are working with challenged or handicapped individuals (who) help in the kitchen," Bauer said.

Also, "We have several programs (where people) come in and learn to work in a commercial kitchen," Twin Cities Meals on Wheels Coordinator Pam Hill said. "We work with BOCES, we work with North Tonawanda High School, we also have People Inc., Christian Heritage and a new group called Steps. ... BOCES actually calls it life skills learning." 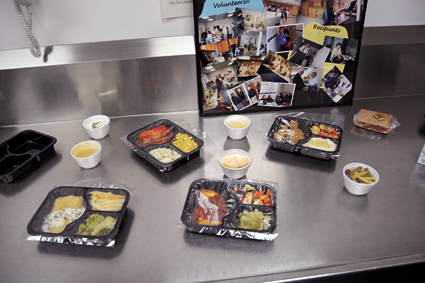 Shown are samples of prepped meals that are delivered to clients.

A one-on-one program is offered for BOCES students who come in once a week to work more independently while helping prepare the meals for pickup and home delivery.

Hill said delivering the ready-made meals serves as a way of checking up on clientele daily.

"We had numerous times over the years where either somebody was down on the floor or was feeling very ill and (the volunteers) let me know ... and we either contact their family or, in the case that somebody is very bad, we dial 911," she said.

"Sometimes (our volunteers) are the only person that senior citizen might see during the day," said Kim Tomaszewski, a member of the Twin Cities Meals on Wheels board of directors. "So they knock on the door, they talk to them, they see how they're doing, and they might have a cheerful conversation with them and give them just that little bit of a personal touch - and that we also consider to be extremely important."

Pappas twice had the opportunity to help deliver meals to the organization's recipients.

"It's a real eye-opener to find out how much these people appreciate the Meals on Wheels," he said. "They really appreciate it and they depend on it. And when you deliver the meals, which I had the opportunity to do for both cities, you see the smiles on their faces. Sometimes they like to invite you in, just have a little, short chat, and it makes their day, too. And it sure gives you an insight into what some people are dealing with and what they're up against.

"And the number of volunteers here that do this in all kinds of weather is just amazing. They do a tremendous job here. ... It's just a fantastic organization, and it benefits both our communities."

Bauer said, "We're always looking for volunteers. I think, in a volunteer organization, there's never such thing as too many volunteers."

Volunteer drivers, servers and helpers in the kitchen are needed during weekdays.

"Doesn't have to be many days," Bauer said. "One day a week would always be helpful."

To volunteer or to donate to Twin Cities Meals on Wheels, call 693-1663. For more information, visit www.tcmow.com. 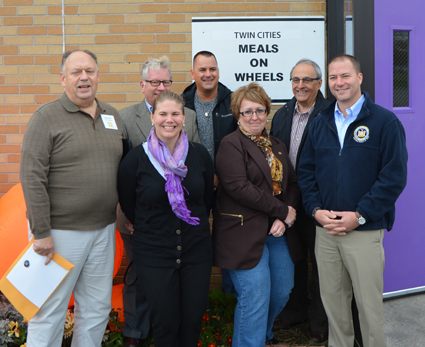