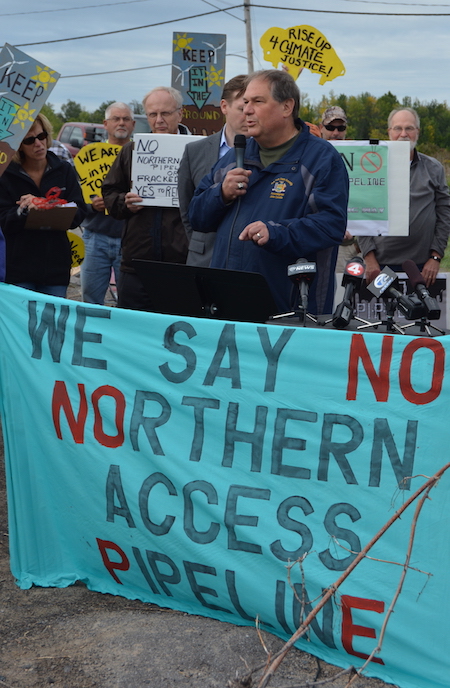 Residents of Wheatfield and surrounding communities rallied Friday afternoon in opposition to National Fuel's Northern Access 2016 pipeline project. With signs in hand, protesters gathered on Liberty Drive where National Fuel has proposed a natural gas dehydration facility to be constructed as part of the general project.

Overall, the pipeline project is expected to move fracked gas from Pennsylvania up through Canada. The dehydration facility in Wheatfield would burn off excess water vapor in gas to meet Canadian low-moisture standards.

Residents have continuously expressed concerns about possible negative effects the facility would have on public health, safety and the environment.

On Sept. 21, the Town of Wheatfield Planning Board approved National Fuel's site plan. And in July, the Federal Energy Regulatory Commission stated, after conducting an environmental assessment of the project, there would not be any negative impacts to the environment.

Despite this, residents and local activists still have concerns. 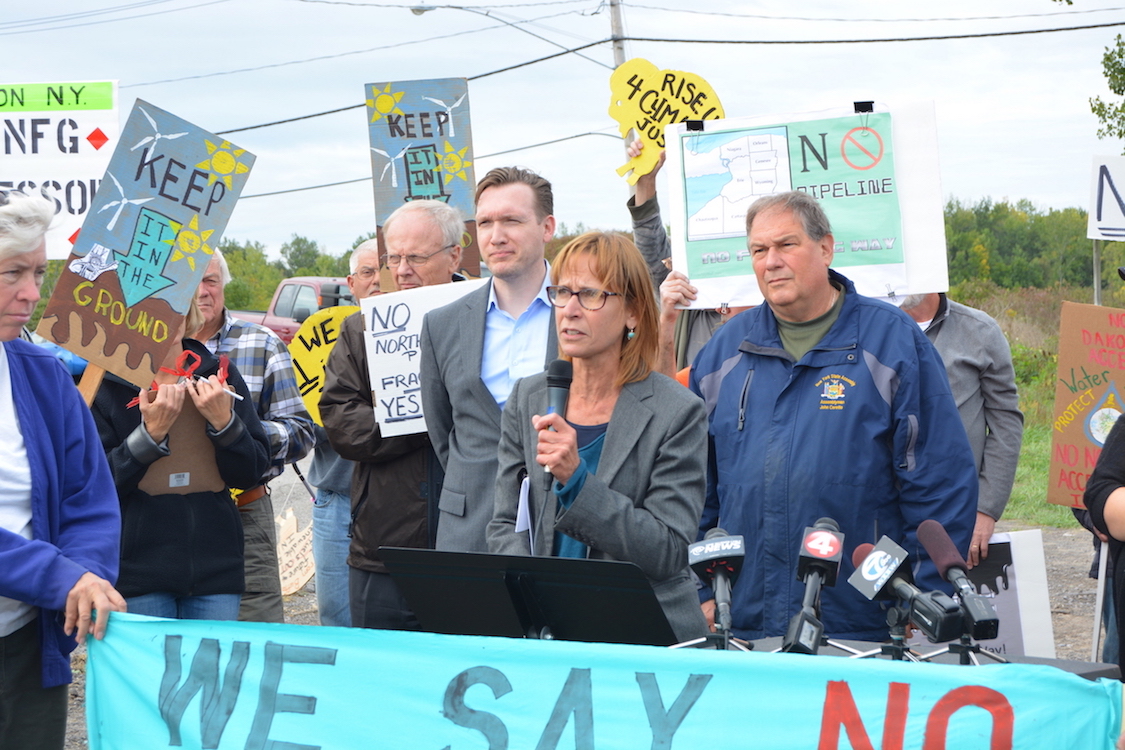 Diana Strablow speaks to the crowd and media.

Diana Strablow, Niagara Sierra Club Group member and former Errick Road Elementary School teacher, said she was concerned that both National Fuel and the Federal Regulatory Commission have not looked enough into what the culminate impact of the dehydrator station could be.

"What we are asking people to do is to call Gov. Cuomo and ask him to deny the 401 water permit for this project, because the federal energy regulatory commission, in my opinion, is not doing its due diligence," Strablow said. "It is going ahead and approving it. At the very least, we are calling on them to do a more extensive environmental impact study."

She said possible explosions or accidents could occur with the dehydration facility. Strablow also pointed out the facility would be stationed in a densely populated area and in close proximity to railroad tracks and the Niagara River, as well as schools and other nearby infrastructure.

Wheatfield Action Team co-founder Jennifer Wozniak echoed Strablow's concern. She said, "This facility ... sits just over 100 feet away from a densely populated neighborhood, with over 350 houses, including my own. This is the place where my husband and I raise our 2-year-old daughter. ... This is the same neighborhood that needs more than a half-dozen school buses every single day, because there are so many children. This is the same neighborhood that will have toxic emissions ... in a constant threat of leak or explosion."

National Fuel representative Karen Merkel said in an email last week, "National Fuel is committed to making reasonable, good faith efforts to work cooperatively with the Town of Pendleton, the Town of Wheatfield and all other municipalities, regarding the Northern Access Project. We are an industry leader with a strong track record of safe and reliable operations; a major employer in the region; one of the largest tax payers; and, importantly, made up of local employees committed to the well-being of the communities we serve. The employees of National Fuel care about this community as we live here, too.

"We operate within the boundaries of State Parks, State Forests, State Game Lands, National Forests, under recreational lakes and rivers, streams and wetlands, within subdivisions, under hundreds of miles of farmers' fields, under soccer and baseball fields, under sidewalks and streets, hiking and biking trails and golf courses. Most people don't know we are there because our daily presence and operations generally do not disrupt their ability to live their lives."

As far as the emissions, representatives of National Fuel have repeatedly stated there would be little to no emissions coming from the site, and it would only run potentially a few days a year. With feedback from residents, as well as the Wheatfield Planning Board, the company added an enhanced oxidizer to the dehydration system to increase the efficiency of burning off potentially hazardous emissions.

"The response when National Fuel was brought this particular concern (of harmful emissions) was, we'll actually make it safer," said Dr. David Reilly, professor of environmental policy at Niagara University. "Now why would they wait until we had to raise the concern for them to say we'll make it safer? It's an absurd proposition that they would go from ... killing off 99 percent of those chemicals to now 99.5 percent. And they said we can probably do better. And that's not good enough when we have the Niagara River right here; when we have Grand Island; when we have Niagara Falls and Love Canal; Wheatfield; when we have all of the communities within this 10-mile radius that we'll be dealing with the emissions, the water vapor that comes off of this dehydrator station."

National Fuel's estimated efficiency of burning harmful emissions was initially 99.0 percent and, as of last week, it was said to be increased to a guaranteed 99.9, with expectations of going toward 99.995, possibly 100 percent.

Strablow also said she is concerned expanded gas capacity would be going through aging pipeline infrastructure over Grand Island.

"So, as the town supervisor of Grand Island, I had to come out and at least say, 'Are we sure about this? Do we have all he answers?' I don't think we do."

Assemblyman John Ceretto, who also spoke at the rally, said, "We have to have answers. That's all this group is asking for, and that's what my job is, to listen and be their sponsor for what they think is safe for them and their children. ... You have to feel safe."

"The benefits of (this) pipeline have nothing to do with this area," said Reilly, a resident of Grand Island. "In other words, New York state gains no benefit from this pipeline that's passing through from the fracking fields in Pennsylvania right up to Canada."

Strablow said, "It is not benefiting New York state or its residents, so why would we want to bear the burden of this and take the chance of explosions, take the chance on leaks in our water, take the chance on our Niagara River and our drinking water? It just does not make any sense. So, we are standing together and saying 'No' to this, and we hope that our government agencies will wake up and listen." 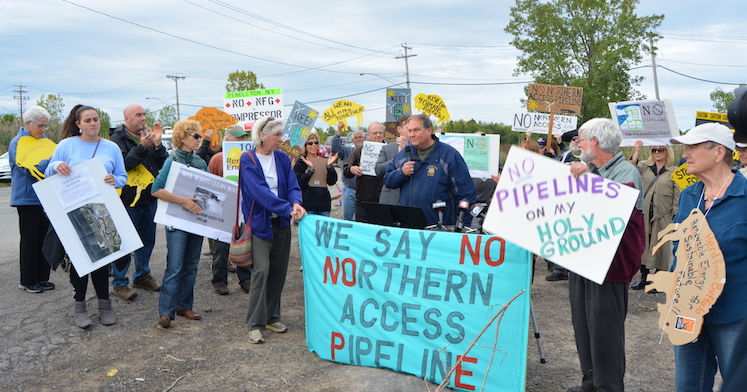