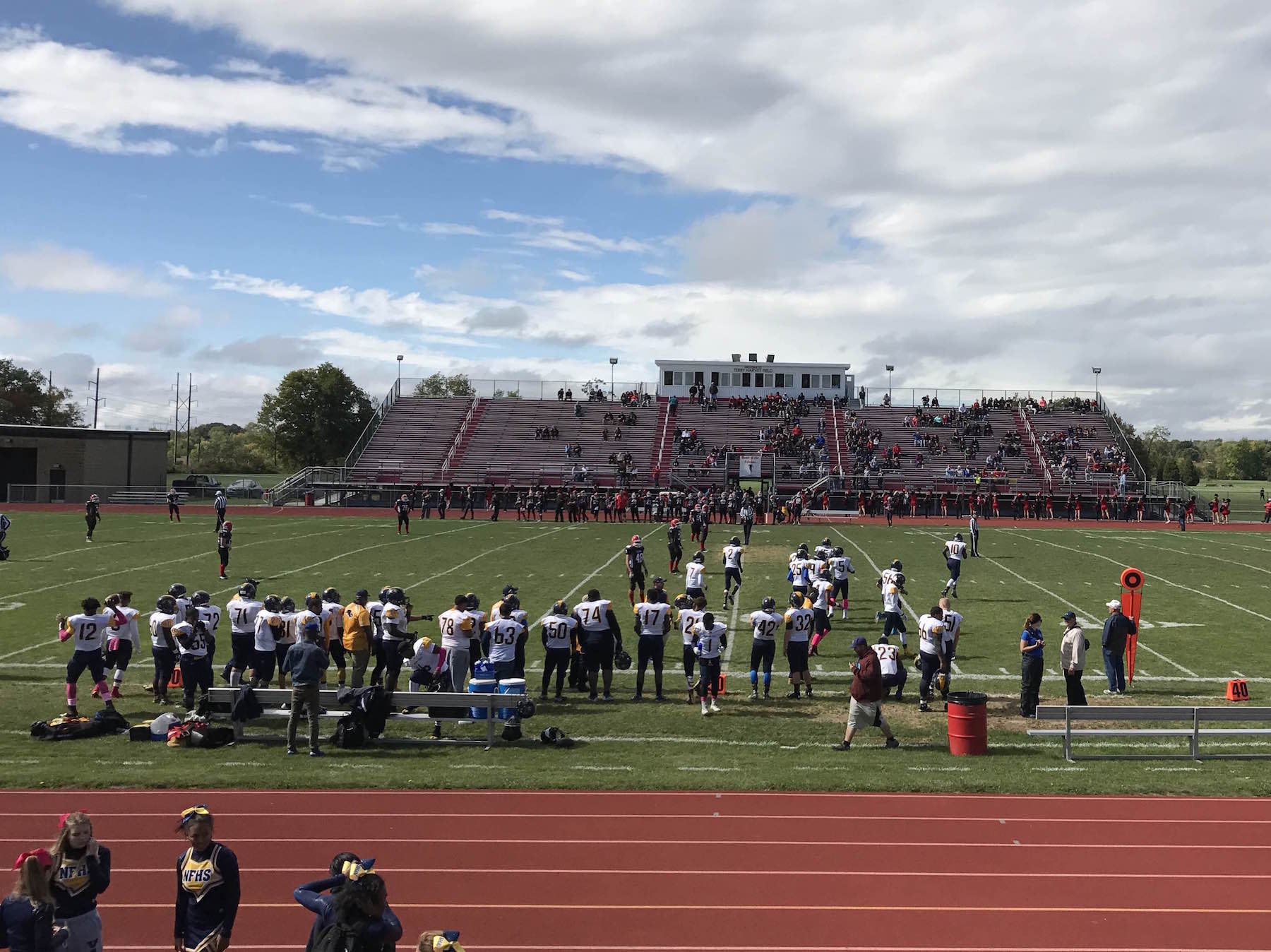 The Wolverines thumped the Falcons.

In front of a large away crowd, the Niagara Falls Wolverines spoiled the Falcons' homecoming festivities with a 28-0 win over rival Niagara-Wheatfield at Terry Harvey Field on Saturday.

The first half was not good for either team, with both sides combining for only five first downs and a combined 0-9 on third-down conversions. Niagara-Wheatfield encountered problems with turnovers, fumbling the ball three times, and losing two of them to the Wolverine defense.

The lone score of the first half came from Rodney Barnes, who caught a 35-yard touchdown pass from quarterback Jhamir Isom. The score was 7-0 at halftime.

Niagara-Wheatfield started the second half with an onside kick that surprised the Falls' special teams unit. The ball bounced off a Wolverine and then was recovered by the Falcons. This got the home crowd riled up, and the Wheatfield offense came onto the field with momentum. It was all for not, though, as the Falls' defense stopped the Falcons offense, forcing a punt. It was a good one, downed at the Wolverines' 7 yard line.

Isom and the offense came back on the field and, on second down, the QB launched a pass to Barnes for a gain of 49 yards. After a short running play, Isom worked his magic again, scrambling away from pressure, and then throwing a ball down the field to Dee Hunt for a 48-yard touchdown pass. After a good extra point, the Wolverines were up 14-0.

On Wheatfield's next drive, quarterback Matt Mixon threw a deep ball that went in and out of his receiver's hands. It would have been a huge gain into Niagara Falls territory. Instead, the drive would result in a punt. At the end of the third quarter, the score remained 14-0.

In the final quarter, Wheatfield would fumble for a fifth time, and a third Falls fumble recovery set up the offense for another scoring drive.

With 8:09 left in the fourth quarter, Niagara Falls called a timeout on 4th and 3, around the Falcons 35 yard line. Coach Don Bass drew up a play that placed Syquan Ralands, usually at defensive end or linebacker, at tight end. On that play, Isom and most of the receivers went to the right, Ralands went left and was wide open over the middle. He made a defender miss, and ran it in for a touchdown to make it 21-0.

After another Wheatfield drive couldn't gain any momentum, the Falls took over with backup quarterback Jermanti Justus in the game, relieving Isom of his duties. Justus had two big runs on the Falls' final offensive drive to get them to the 3 yard line. He capped the drive off with a touchdown run with under a minute left, to make it 28-0 Wolverines.

Wheatfield would run two plays and time would run out, giving the Wolverines the victory.

After a slow start in the first half, the Wolverines came out and dominated all assets of the game in the second half. Bass said he was very pleased with his team's showing.

"We didn't do anything different coming out of the half, we were just able to settle down," he said. "We arrived late, we got here about 22 minutes before kickoff, and we've been notoriously slow starters all year. And it carried over a little longer than we wanted it to. And with Wheatfield being a rival, the players get a little amped up."

Bass also praised the play of quarterback Isom and what he's brought to the team all year, especially today.

The shutout extends a streak for the Wolverines defense in which it hasn't given up a point in more than six quarters of play. Bass had nothing but good things to say about his defense following the shutout.

"I told Coach Robins earlier in the year, 'I think this is the best defense we've ever had.' I mean, we're fast all over, strong up the gut, and when they play with an attitude, we're a hard team to play against," Bass said.

He said he wants to keep that emotion going into next week, when the Wolverines (4-1) go on the road to play the Williamsville North Spartans (3-2) at 7 p.m. Friday for a possible No. 2 seed in the playoffs. Niagara Wheatfield (0-5) will head out to Lockport (0-5) next Saturday at 2 p.m. for a battle with the Lions.

SIDE NOTES: The undefeated Starpoint Spartans found themselves down at home, 17-6, with 6:05 remaining against the second-place North Tonawanda Lumberjacks. Starpoint scored with a little over two minutes left to make it 17-12, and then recovered an onside kick on the ensuing kickoff. After an interception, NT took over and went four-and-out, giving the ball back to Starpoint with 1:50 left. Starpoint ended up scoring, to make it 18-17, and complete a near-impossible comeback and stun North Tonawanda.

Starpoint (6-0) remains undefeated and in charge of the A North Division. The loss dropped NT (3-2) to fourth-place in the A North.