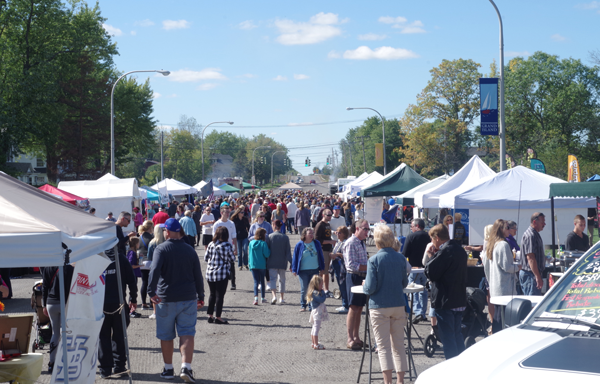 Sunny and mild weather without a trace of rain greeted the patrons of the Taste of Grand Island Fall Festival Saturday. Pictured is the part of the festival on Whitehaven Road. (Photo by Larry Austin)

Though the previous four festivals were highly successful, some had occasions of foul weather. Saturday, temperatures in the 60s, without a trace of rain, beckoned crowds to the town center throughout the eight-hour event.

"It went phenomenal," said event organizer Corey McGowan. "Weather makes or breaks anything, so we had gorgeous weather, which was certainly in our favor, but the turnout has been excellent. We've had four or five vendors sell out already, and that happened maybe halfway through the event. People came out in full force and everyone's really appreciative: all the restaurants, all the businesses, myself. I mean, this is really what doing events like this is all about, it's bringing people together for a good time, and that's exactly what happened today."

Approximately 100 vendors took part in the festival. Among restaurants, several Island businesses won top honors from food judges at the event. Among them, Mallwitz's Island Lanes was awarded best wings at the festival. The bowling alley on Whitehaven Road is one of the answers to the question, "Where do I go for the best wings on the Island?" Island Lanes manager Mike Mallwitz responded, "I would stop them right there and say, 'No, where do you go for the best wings in Western New York? And I would say the bowling alley on Grand Island."

"To start with, we buy the best wings you can buy," Mallwitz said, "So we don't skimp at all. And we just pay close attention to the cooking process, like everything."

Among the other award winners at the event were Ellden's Grill & Banquet, Currents in the Radisson Grand Island, Dick & Jenny's, Baked Cupcakery and the Village Inn. 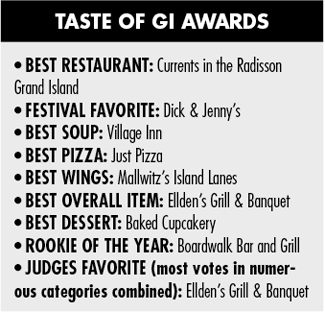 The Taste of Grand Island is an ideal venue for a restaurant or eatery to unveil new food options, and several businesses took the opportunity to do just that. Island Lanes brought out an addition to its regular hot/medium/mild lineup of wings.

"New on the menu is grilled mango habanero," Mallwitz said. "That's probably the most popular new sauce. It's bangin'. It's very good."

"It's the right amount of hot. It's not too spicy for people that don't really like spicy, because the mango kind of cuts it down with the sweetness," explained Mallwitz.

The patrons of the Taste greeted the wings just like the weather: warmly. Mallwitz said if selling out of wings more than two hours before the end of the festival is any indication, the feedback about the grilled mango habanero has been strong. Sort of like a culinary 300 game for the bowling alley.

Local businesses used the event as a sort of a market expo. Robin Hoch and Kath Anderson unveiled Krack-Noon (http://kracknoon.com), which Hoch, a West River resident, called a Grand Island based "lifestyle brand." They sold apparel and Grand Island-themed merchandise that promotes "a modern twist with a drinking feel."

"This is the launch," Zaccaria said of showing her merchandise in the Town Commons at the Taste of Grand Island. "I wanted to see how people respond to it, how people react to it, and so far so good."

Her long-term goal is to have a sign shop with an Everything Grand Island store out front.

Although part of the location for the Taste of Grand Island Fall Festival, Whitehaven Road, was under rehabilitation with a county road resurfacing project, the rough surface was "really a nonissue," McGowan said. 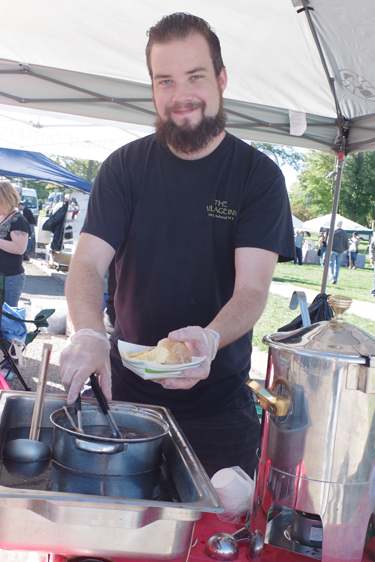 Jonathon Dudley serves up food at the Village Inn. (Photo by Larry Austin)