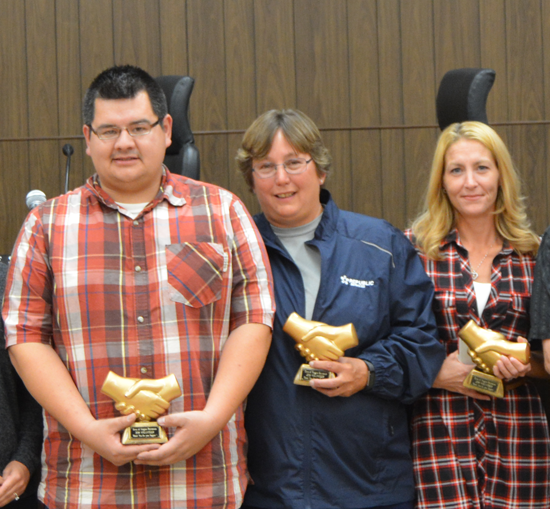 Summer volunteer coaches, from left, Corey Hewitt, Pam Scott and Lisa Sembert pose with awards presented to them by the Town of Niagara Town Board and Recreation Department.

Town of Niagara awards volunteers for help with summer endeavors

The Town of Niagara Town Board presented summer volunteers with awards at Tuesday night's board meeting at Town Hall.

Awards were given to volunteer summer sports coaches as well as those who judged the "American Graffiti Classic Car Show" held last month in conjunction with the town's "Music Mania Mondays" concert series.

"We have a number of volunteers who assisted us in two ventures this past summer," Town of Niagara Supervisor Lee S. Wallace said. "The first one was volunteer coaches - this is really the first time the town's delved into this avenue. ... I think anyone who's ever done this, coached at all, me being one of them, knows that it's a thankless job, tough to do. And we really do appreciate all the efforts from those who stepped forward and took on the task. I hope it was rewarding for you."

The board also recognized the four judges of the car show, including Jim Zakia, Dom Farbo, John Hutchins and Ken Joz. The board thanked the owners of Halleen's Automotive on Military Road for sponsoring the event, as well.

"If you came to the car show, we were kind of overwhelmed," Wallace said. At past car shows, Wallace said there are usually a little over 100 cars and this year's event attracted approximately 240, making the job of judging them more challenging than usual.

•Wallace will file an application for $30,000 in grant funding to the Justice Court Assistance Program on behalf of the Town of Niagara Justice Department.

The money would go toward remodeling the department's office system, including furniture and other supplies.

Over the past year, the town's police department moved from the office, which is now occupied by the justice department.

The move allowed the town justices to have their own office space (something they did not have before), as well as another office area for prosecutors.

•Town board members voted in favor of entering into a contract with Trem Care Maintenance for necessary winterizing repairs to the town garage roof not to exceed $7,500. Wallace said the roof will have to be replaced eventually.