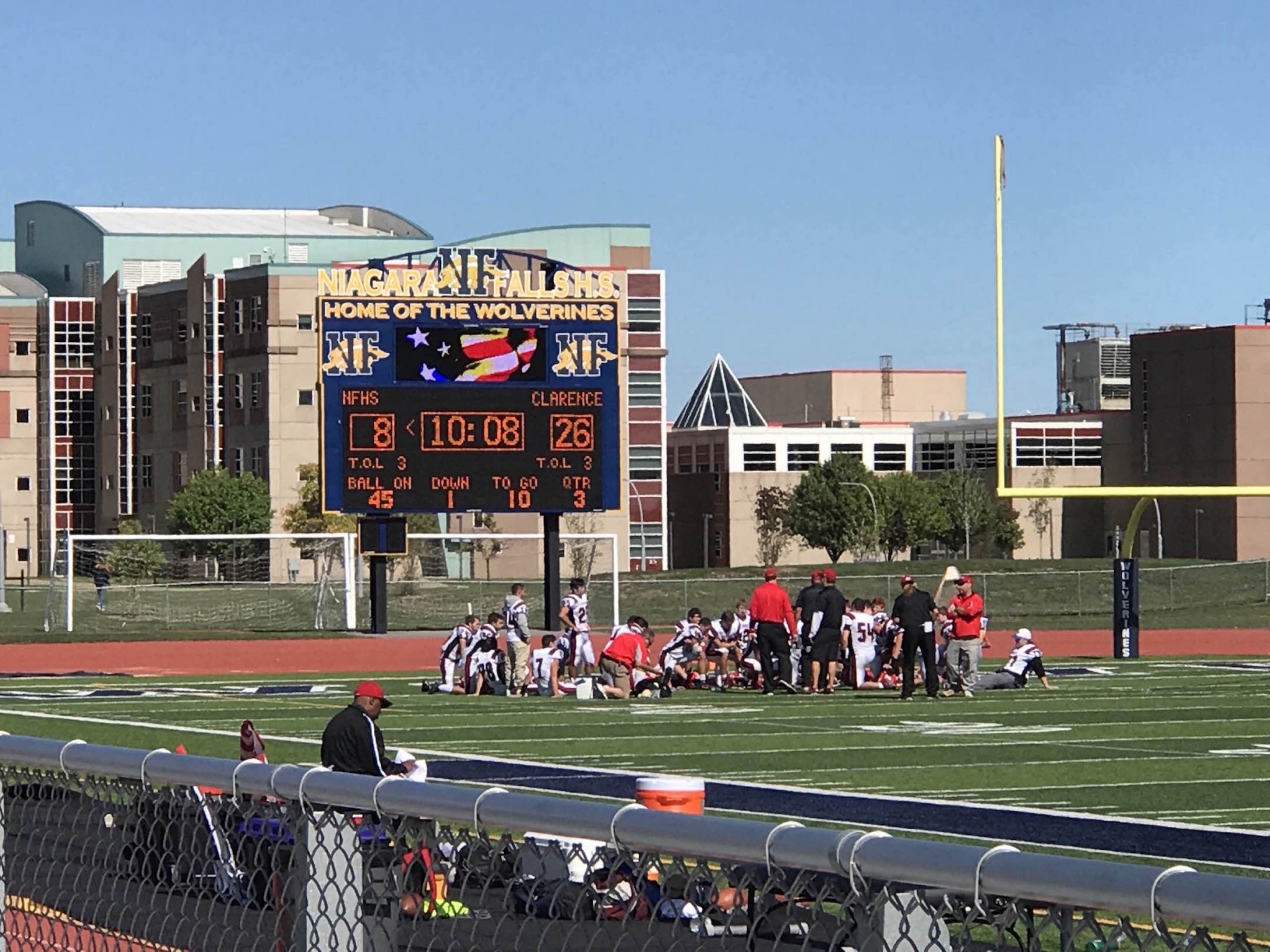 The Clarence Red Devils held on to defeat the Niagara Falls Wolverines by a score of 26-16.

In front of a large Cataract City crowd on Saturday, the Clarence Red Devils defeated the Niagara Falls Wolverines in the latter's homecoming game, 26-16.

Clarence landed the first punch early with a five-yard touchdown run to go up 7-0. Then, after a Niagara Falls offensive drive plagued by penalties, Clarence scored again on another touchdown run by No. 24 Jack Reger.

On the Wolverines next drive, a bad snap by the long snapper over the head of the punter on fourth down resulted in a turnover on downs. That gave Clarence the ball in good field position. A few plays later, Clarence cashed in, but missed the two-point conversion, making it 20-0.

After holding the Falls again, Clarence went on offense deep in their own territory. Clarence went back to pass and the Wolverines' Cortese Myles jumped the route and intercepted quarterback Jack Putney. This set up the Wolverines offense at the nine-yard line, where, two plays later, quarterback Jhamir Isom kept it himself for a four-yard touchdown run. The Wolverines went for two and converted to make it 20-8.

With the home crowd buzzing, momentum seemed to take a little shift until the ensuing kickoff, where Clarence returned the ball to the Wolverines side of the field, setting up great field position. Clarence would continue running it and, after a few penalties by the Falls defense, No. 11, Brendan Cimerman, pounded it up the middle for a short touchdown run. Clarence would miss the two-point conversion, and take a 26-8 lead to halftime.

The Wolverines got the ball to start the half and came out in an emphatic way, taking nine plays to go 57 yards. The drive was finished off by a Del Hunt touchdown run. The Falls converted on another two-point conversion to make the game 26-16 with 7:11 left in the third quarter.

Clarence came out with the same game plan as they had in the first half, which was to continue running the ball. This time, the Wolverines were able to stuff the run, and get the ball back after a failed fourth down conversion by Clarence.

Niagara Falls' offense came out on the field at the Wolverines' own 48 yard line. After a play that lost yards, Isom connected on a big pass play over the middle to No. 14, Jaymeire Maye, for a first down around the 25. The pass play had the Falls in good field position, but they were unable to convert, turning it over on downs. The quarter would end with the score 26-16.

The fourth quarter was a back and forth battle of offenses that would turn it over on downs consecutive times. Clarence was the only team to punt in the fourth quarter and it only came once. Niagara Falls would find themselves with the ball plenty of times due to their defense stopping the run game of Clarence, but it was all for not. Clarence ended up running out the clock and the final score was 26-16.

Afterward, Niagara Falls coach Don Bass was not pleased, as it was a game where almost every play had a yellow flag thrown on the field for a penalty.

"We made some mistakes, but I think today was some horrendous officiating. There were some calls he explained to me; he literally took three penalties away and said, 'They wouldn't have been able to make the tackle anyways,' " Bass said.

Even in a losing effort, Bass said he was proud of the fight in his team and how players were able to hold Clarence in the second half.

The loss for the Wolverines drops them to 3-1, while the win for Clarence keeps them undefeated at 4-0.

The Wolverines will head to Niagara-Wheatfield next Saturday at 1 p.m. for a rivalry game against the Falcons. Clarence will unveil a brand-new field, and look to preserve their undefeated record, against the Williamsville North Spartans at 7 p.m. Friday.