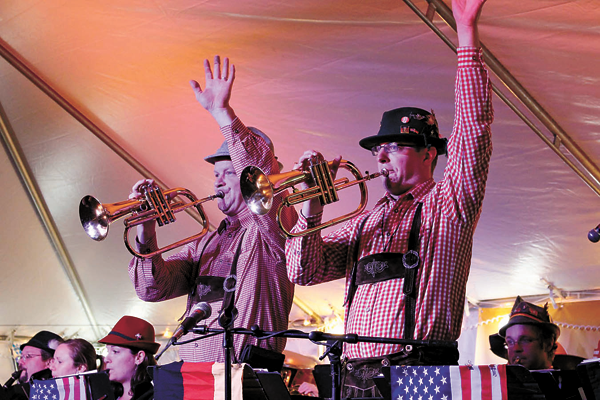 Both traditional and new events are popping up all over Western New York now that the autumn season has arrived.

Next weekend, areas in and around Old Falls Street will be bustling with activity.

For an authentic autumn experience, visitors can take part in the seventh annual Oktoberfest on Old Falls Street, which will take place from 1-8 p.m. Saturday, Oct. 1.

Oktoberfest will offer up German fare, music and brews, along with more attractions.

"We have so many interactive games that will be open for everybody that day," Old Falls Street Marketing Director Susan Swiatkowski said. "And new this year we're actually going to (provide), for children, a straw maze that they can run through and try to navigate through."

Some of the featured games and activities include a Lego board, table tennis, foosball, large-scale chess and checkers, hopscotch and corn hole.

Arts and crafts for children will also be offered this year.

"All that is absolutely free," Swiatkowski said. "There's no extra admission or donation prices."

The activities will be concentrated at Old Falls Street's middle block, across from the Niagara Falls Culinary Institute.

There is also a new attraction to be offered for adults this year. An inflatable, old-world-style pub that spans 70 square feet and extends 27 feet tall will be on site, featuring a lounge area and bar.

"We're actually going to be able to serve people within the space, as well," Swiatkowski said.

Offered will be classic German fare, including bratwurst on a bun, rouladen, German potato salad, hot pretzels and other traditional sides - not to mention a variety of German beers and wines and Oktoberfest brews.

Returning highlights include the traditional tapping of the kegs and performances by the German American Musicians.

"We really enjoy bringing (the German-American Musicians Association) back year after year," Swiatkowski said. "Whether you're German or not ... everybody wants to 'oompah' that day. So they really get you in the mood and it's a lot of fun." 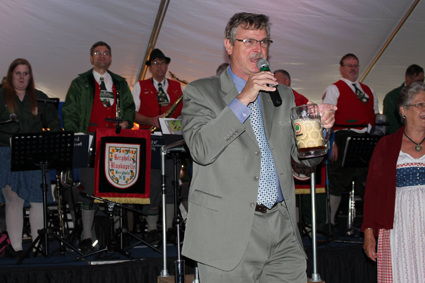 "We wanted to add another event and we were trying to think of what wasn't done here, and we thought about country music."

The festival is free and open to the public and billed as a celebration of country and southern rock partnered with a variety of food, retail vendors, and an auto show among other activities and attractions.

The festival will feature country, southern rock and blues bands that perform nationally and locally.

"We've got the best country bands from Buffalo and the local area, so the music is going to be phenomenal. It's going to be great," Crogan said.

Some of the featured local bands include The Heavenly Chillbillies, The Hootz and J.B. Aaron, who Crogan described as a "Local country singer who is just about to make it big in Nashville." Aaron will serve as the master of ceremonies for the event and will be Saturday's headliner.

Besides music, the event will also feature a barbecue contest including barbecue food trucks and other vendors competing for a grand prize of $250 cash, a free booth in next year's festival and first-place ribbon bragging rights. Categories for the competition include best barbecue sauce, best pulled pork, best ribs, and best barbecued chicken sandwich, and, of course, best bacon dish.

Crogan said there's always room for more vendors, for those who are thinking of jumping on the Boot, Brews and Bacon bandwagon.

The invitation to get involved is also open to representatives of local nonprofits that would like to set up booths and give out their information or raise money for their organization, Crogan said.

"Community organizations can reach out to us," he said. "We encourage it, because we want people to know what's available to the community. Because that's what these two festivals (The Niagara Falls Music & Art Festival and Brews, Boots & Bacon) are really based on - to help grow our city, create a better environment for our community and our neighborhood. So the more knowledge people get, the better off everyone is."

For more information about the event or how to get involved, call 534-9960 or visit www.festivalatthefalls.com. 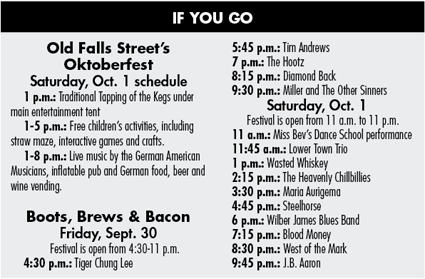