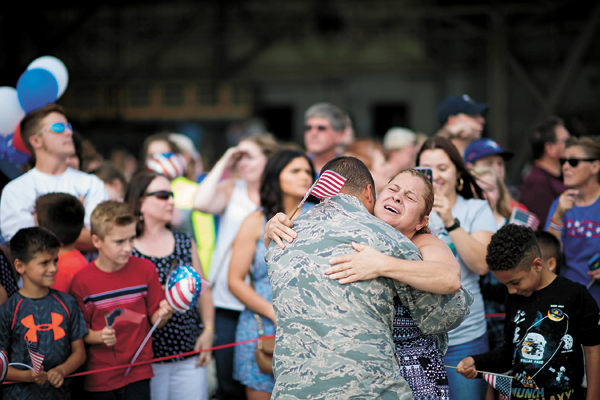 After a 40-year legacy, the C-130 Hercules aircraft made their final return to the 914th Airlift Wing on Sunday.

914th Airlift Wing Commander Col. Brian Bowman waited alongside loved ones of returning military members to welcome the airmen home from a deployment in support of Operation Inherent Resolve.

"I could not be more proud of our airmen," Bowman said in a press release. "Their efforts overseas showcased the 914th Airlift Wing as a hardworking, professional organization."

All C-130s from the base are being transferred to another installation, while the 914th Airlift Wing will make way for its new mission with the KC-135 refueling tankers.

Family and friends await the return of their loved ones via the C-130s.

Although the base is preparing for its new mission, Bowman emphasized how important the C-130s have been to the base.

"The C-130s have served this unit well," he said. "As we await the many changes and innovations that will affect this installation in the future, it's important for us to reflect on this occasion and congratulate our heroes on a job well done."

The C-130 is a four-engine turboprop military transport aircraft designed for troop, medevac and cargo transport. These dynamic aircraft have utilized airmen as pilots, navigators, loadmasters, flight engineers and medical evacuation personnel to perform many of the unique functions at the base for more than 40 years.

Sunday's experience was not only meant to serve as an opportunity to recognize the unit members who deployed to support the global mission, but to reflect on the memories and importance of the airlift mission.

For more information, visit www.niagara.afrc.af.mil or find the 914th Airlift Wing on Facebook at www.facebook.com/914thAirliftWing. 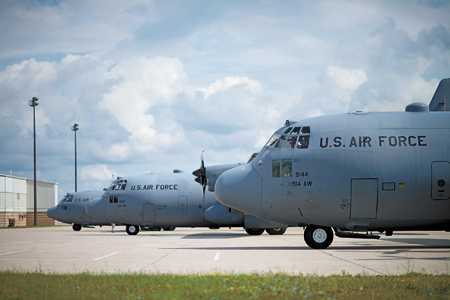 Shown are the C-130 aircraft that made their final return to the 914th Airlift Wing on Sunday. (Photo by Tech. Sgt. Stephanie Sawyer, 914 Airlift Wing Public Affairs.)