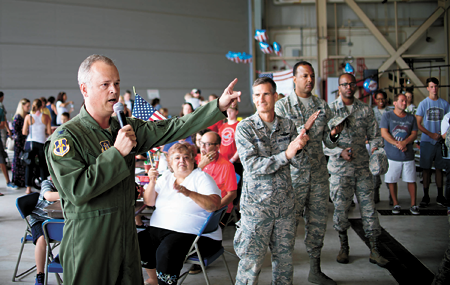 Shown is 914th Airlift Wing Commander, Col. Brian Bowman as he speaks to a crowd of retirees and their loved ones. (Photo by Tech. Sgt. Stephanie Sawyer, 914 Airlift Wing Public Affairs.)

The event included tours aboard a C-130 Hercules aircraft, base bus tours, updates on retirement benefits for retirees and their spouses, a buffet lunch and a retiree fair.

"For most retirees, this event is the only link to their questions," said Retired Activities Office Director Joseph Reele in a press release last week. "We want to educate the retirees that attend of what their benefits are, and provide literature and points of contact as well as other information for their families."

This event drew approximately 150 retirees from across the Buffalo-Niagara area. It served as an opportunity to thank retirees for their service and educate them on available programs.

"The hope is that we can encourage people, especially retirees, to use the base more often as well as inform them on the many valuable services we provide," Reele said. "The more people use the base, the more valuable it becomes for everyone."