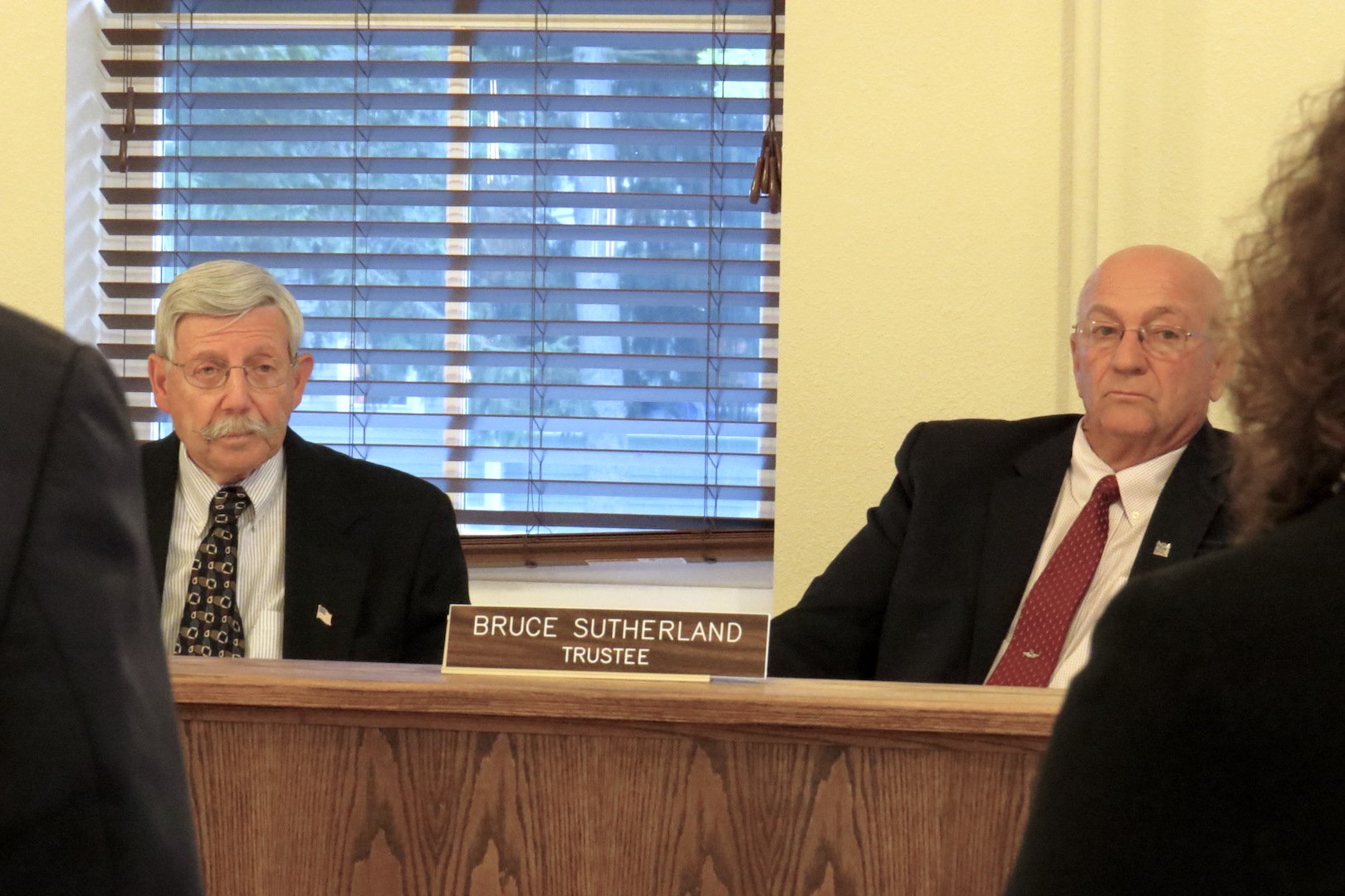 Lewiston's long national nightmare is nearly over. ... For better or worse.

Trustees are tentatively looking to issue a State Environmental Quality Review Act declaration of impact on the Ellicott Development plaza plan at their work session on Monday, Oct. 3. A final project vote would follow, at the regular board meeting on Monday, Oct. 17.

Both gatherings start at 6 p.m. in the Morgan Lewis Village Boardroom inside the Red Brick Municipal Building, 145 N. Fourth St. The board will hold a public hearing prior to making the ultimate decision.

This scheduling comes after Village Board members heard an in-depth explanation of the plaza traffic study, which was conducted and presented by SRF Associates of Rochester Senior Traffic Engineer Amy Dake. She said plaza traffic poses no significant impact to the intersections surrounding the proposed development.

Moreover, Dake said the number of automobiles entering and exiting the plaza, under "worst-case" scenarios, would fall short of the New York State Department of Transportation's threshold for a new traffic light.

The Buffalo-based Ellicott Development purchased 4.1 acres of Lewiston land bordering Center, North Eighth and Onondaga streets in November 2012. The merits of building a 4.1-acre mixed-use plaza have been debated for more than three years, at numerous Village Board, Planning Board and Zoning Board of Appeals meetings.

Proponents of the plaza have largely remained quiet during the process, though some have told NFP they favor the plaza because it will contribute to the tax base.

Residents opposed to the development have said it will hurt locally owned businesses, and have talked about filing a lawsuit against the village for allegedly ramming the project into codebook compliance.

The traffic study is part of the SEQR process.

"The point of a traffic impact study in this context for a private development ... is to identify any impacts from the project, and how those impacts can be mitigated, if that's necessary," Dake said. "We've already identified that the immediate intersections don't require mitigation as a result of this project."

SRF collected data on Saturday, Oct. 4, and Wednesday, Oct. 8, 2014, from a counting of automobiles traveling on Center and North Seventh/North Eighth streets, and Onondaga and North Seventh/North Eighth streets. SRF inputted the information into a Synchro Software analysis program. The traffic report was created that month, and then updated in February of this year following a change in the site plan.

The traffic engineering and planning consultants determined the typical peak hours are 5-6 p.m. weekdays and noon until 1 p.m. weekends.

Based on the nature of the plaza - envisioned to be a combination of retail and restaurant spaces, as well as 13 apartment units, and possibly a pharmacy - SRF determined the proposed development would add 71 entering and 66 exiting new vehicle trips during the weekday p.m. peak hour, and 134 entering and 125 exiting new vehicle trips throughout the Saturday peak hour.

The proposed driveways - an entry-only on Center Street, two full-service paths on North Eighth Street, and one in/out along Onondaga Street - will be stop-controlled.

Trustees have been pushing the DOT to put in a traffic light at Center and Eighth streets. Their appeals have, thus far, fallen on deaf ears, as the DOT won't estimate the potential traffic impact of a proposed development.

Dake offered further explanation, stating the expected traffic increase, at a generous 1 percent growth rate, would fall well short of what's required at the state level (between 100 and 150 new vehicle trips per hour) over either a four-hour or eight-hour daily traffic interval.

She noted traffic backups on the North Eighth Street hill could rise between 4 and 6 seconds per car. 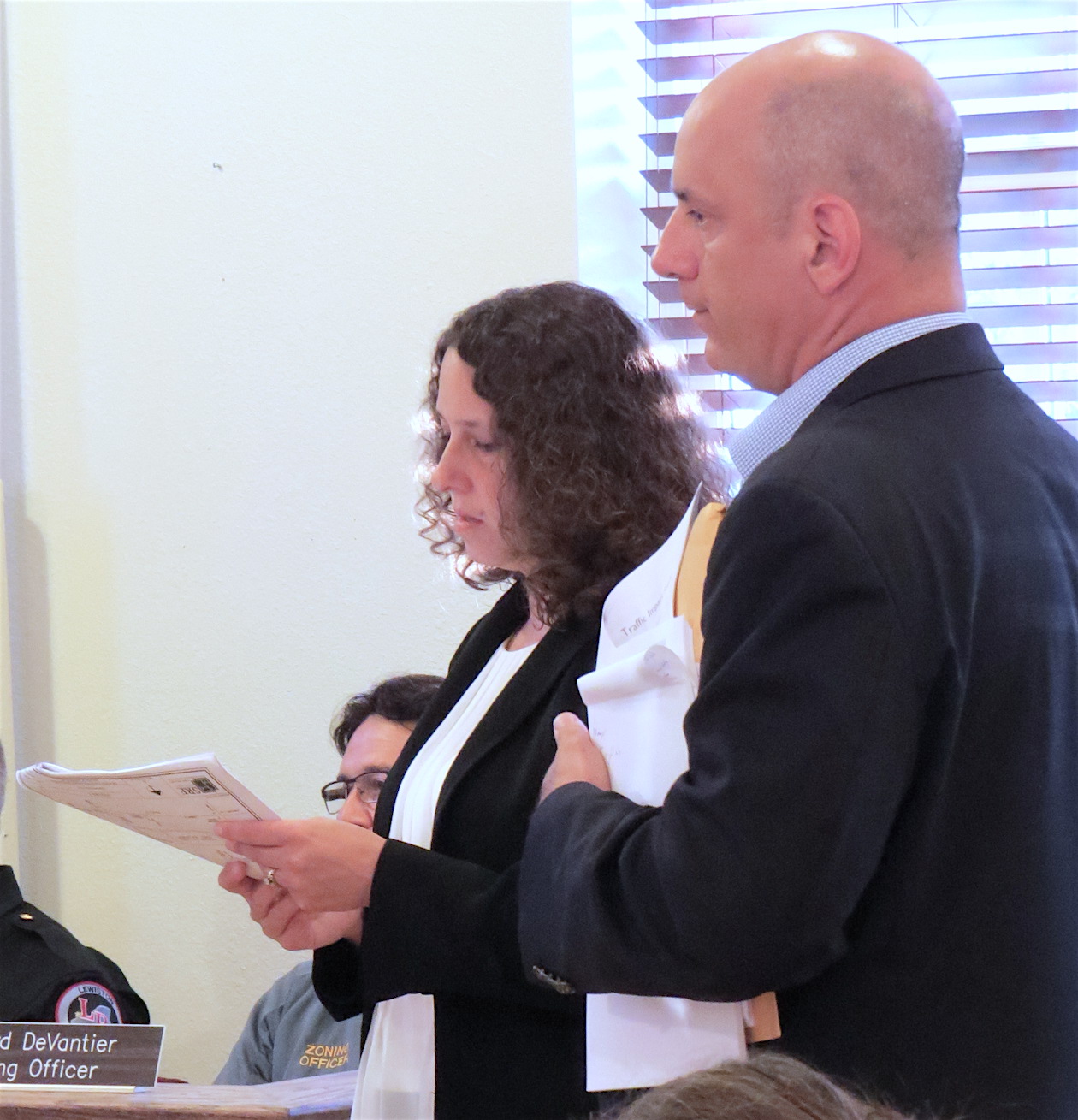 Center Street business owners Neil and Donna Garfinkel said it was unwise to dismiss summer festival and concert events, when Center Street's adjoining north roadways are lined with vehicles. Dake said it was standard protocol to gather information during the school months, and to dismiss abnormal activity.

Rich Donaldson, an Onondaga Street resident, said basing a traffic study on one day of observation lacked common sense. He also called the North Eighth Street slope dangerous, and asked Dake if that was considered.

"There may be existing problems, but it's not a result of this project," Dake said.

In recent months, residents have asked to have the plaza's Center Street roadway reconfigured to allow traffic to exit, as well as enter.

SRF determined a plaza exit onto Center Street, even restricted to right-turn-only, would create an unnecessary "conflict point" with walking traffic.

Sorgi said, "If you're turning in, you have time; you can clearly see. If there's somebody coming, they can see you. If you're coming out, you're kind of inching out. You have cars parked, maybe trying to see if you can get out. People are going to be walking by."

Based on that determination, the village's Planning Board had previously petitioned Ellicott Development CEO William Paladino to structure the plaza accordingly. He agreed to that request and, when asked at the last Village Board meeting, Paladino wasn't keen on the idea of redesigning the roadway.

He added, "I think everything's on the up and up, as far as the study itself."

Village Engineer Michael Marino, who is CEO of engineering at the Buffalo firm Nussbaumer & Clarke Inc., said his traffic surveyor concurred with the SRF findings.

With the traffic study results in hand, Trustee Vic Eydt said the final piece of the puzzle is the wastewater remediation. Ellicott Development is responsible for the removal of four times the amount of wastewater generated by the plaza. This will likely be done by funding village Department of Public Works' efforts to eliminate, or at least minimize, rainwater inflow and infiltration.

"We've got to get together; we've got to do a final review on the traffic study; we've got to have a public hearing on (the project); we've got to do the 4-to-1," Eydt said. "That has to be all put together, as far as how it's going to relate to them - how we're going to charge them. First we have to have a dollar figure to put together that they're going to agree on. And even before that, we have to have something we can agree on (as far as what is repaired and where, within a reasonable scope), and get with (counsel Joseph Leone) and have him write something up, legally, and present it to the developer for him to review it."

Trustees are also waiting for a final fire safety report, ensuring fire trucks can practically navigate the plaza, and extinguish fires within the three buildings set to be erected onsite.

The board asked to have all outstanding details and reports prior to the next two meetings, thus enabling trustees to vote "Yes" or "No" on the plaza.