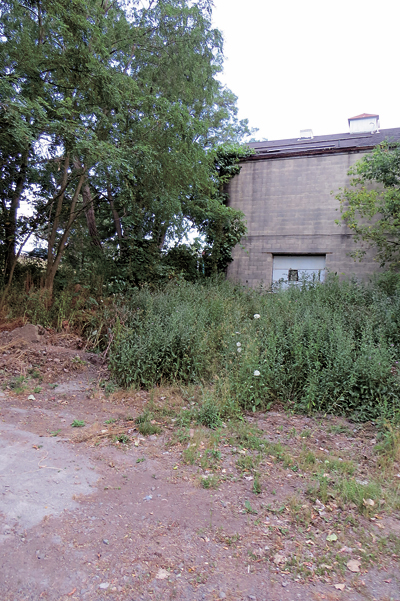 Pictured is part of the land Ellicott Development intends to turn into a 4.1-acre mixed-use plaza.

Trustees in the Village of Lewiston took no action Tuesday on the State Environmental Quality Review Act process related to Ellicott Development's intent to build a 4.1-acre mixed-use plaza on Center, North Eighth and Onondaga streets. They did schedule a public hearing for 6 p.m. Monday, Sept. 19, to review the traffic study prepared by SRF Associates for Ellicott Development.

The plaza is estimated to generate an additional 10,006 gallons of wastewater daily into the village's sanitary sewer. For each gallon of added wastewater, Ellicott is responsible for the removal of four gallons of rainwater. The 4-to-1 remedy works to neutralize inflow and infiltration, thus preserving the municipality's contracted wastewater treatment plant allotment.

Marino indicated the likeliest remedy is the Buffalo company funding DPW or outside contractor construction and repair projects.

"We have a general idea where some issues may be," he said.

Marino said the village should look into the New York State Department of Environmental Conservation contribution tables to determine a proper dollar estimate.

He said, "We need to have that construction work done before, if that development's approved, before they went on line and contributed to our sewer system."

"They can't connect to our sewer until those projects are complete," Marino added.

Brolinski explained, "We're still investigating more and more, but, basically, we came to a standstill, because of festivals, paving, everything else I try to do in the summer. It's almost impossible to get anybody freed up. But we were discussing ... if we could possibly bring an outside company in, like this one that we had five, six years ago. A company came in, ran through the whole village, and videotaped and found all our problems. Gave us a readout; gave us CDs; told us where we had problem spots."

Marino said remediation efforts are part of a new DEC program for developers. If a project is expected to contribute more than 2,500 gallons daily, a downstream capacity analysis is required to see what the routine sewer flow is, what the project would contribute, and how to mitigate the impacts of additional wastewater.

The SEQR is designed to identify any potential environmental or historical impediments to development.

Trustee Nick Conde asked Historian Pam Hauth if the former railroad tunnel that crosses under Center Street from the CVS Plaza to the foot of the former Smith Brothers Pizzeria "was registered (as a historic landmark) or significant?"

"Probably not on that (north) side (where the plaza would be built), because you can't tell, from that side, where that tunnel was," she said. "You can on the south side, but I don't know that that is a historical (area)."

"I think it stops before that (area where the plaza would be built)," Brolinski said. "You can see it right at the edge of the sidewalk. It drops right down. So, I'm assuming that right there is where the tunnel is ended."

Members of the Historic Preservation Board raised the same question on Aug. 22, and also wondered if Ellicott Development would preserve some part of the existing stonewall that sits between the former Country Doctor and Grandpaws Pet Emporium sites.

In an email Aug. 23, developer and Ellicott CEO William Paladino wrote, "We have no intention of opening up the tunnel under the pizzeria and we are trying to save as much of the stone wall as possible (along the Center Street bank)."

Deputy Mayor Bruce Sutherland said, "Say they start digging, and now they find something that is of historical significance. ... We've got to have somebody down there that's going to be watching that, sees that, puts a stop to things, gets a hold of the right people."

He recently said the HPC, as the local agent of the State Historic Preservation Office, would have the right and ability to take such action.

Parts one and two of the SEQR were completed prior to the August Village Board meeting. Trustees are reviewing those sections en route to completing part three and, ultimately, issuing a declaration of impact.

In addition to SEQR, Sutherland said, "On the fire code, there was some discussion about whether the development met the fire code for the state. I understand that the developer had got the Erie County fire code man to take a look at that, and he is also the man that wrote the New York state fire code. If that's the case, I would like to see a letter that we can get from whoever did that study, and looked at the development. I would like a letter from them that it meets the New York state (code). ...

"And I know we need our fire department, also, to come on line and let us know what our individual needs are here. And make sure that is taken care of before we go anywhere further on this whole development."

While speaking of public safety, the board slated a public hearing to discuss the traffic study. Trustees have said the report produced questionable results.

While those numbers raised the eyebrows of residents on North Eighth and Onondaga streets, the study concluded, "Based on the projected trip distribution patterns ... exiting traffic is not expected to adversely impact the residential neighborhood to the north."

Moreover, the New York State Department of Transportation has determined the added vehicle volume does not presently warrant a traffic-calming mechanism.

The board is expecting to hear from Paladino, and/or his representation, and someone from SRF Associates, at the public hearing.

Trustees will meet at 6 p.m. in the Morgan Lewis Boardroom inside the Red Brick Municipal Building, 145 N. Fourth St.