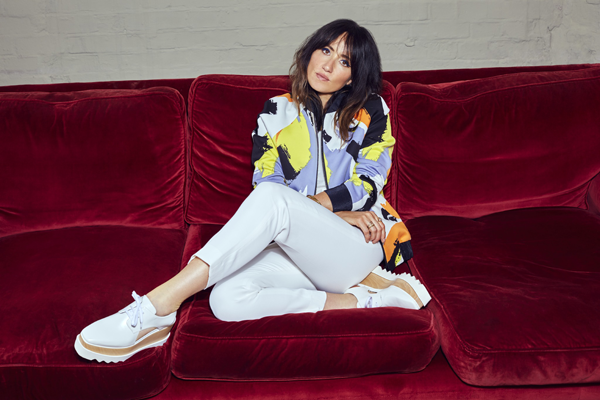 "You know, you think when you have a really successful record, 'Wow, this is it. This is the pinnacle of success.' But, actually, it's now," KT Tunstall said. "It's now, where I'm in a place where I have a record deal where I can make good choices, and I call the shots, and I can decide who I work with, and how I'm going to work, and when I'm going to work.

"And that's the greatest gift, really, is to make music, and go on tour when you want to, and be in touch with your fans so that they're waiting for you to bring out the next thing."

Tunstall, the Scottish hitmaker who burst onto the music scene in 2006 with the multiplatinum "Eye to the Telescope," and hits "Black Horse and the Cherry Tree" and "Suddenly I See," did not expect to be in this position today. She was frustrated with touring, and didn't envision creating new material - at least not for an album of her own.

But, while in California, recharging, and working on film scores, she said the bug bit her. After a series of albums where she veered away from pop music, Tunstall found herself with a batch of "pretty muscular emotional pop songs."

Fans got a taste of the new music with the June EP "Golden State," and the just-released "KIN."

Listen to "Maybe It's a Good Thing," the first single from "KIN," below:

While there was nothing wrong with Tunstall's more recent efforts, there also wasn't material that really spoke to her artistry, or lent itself to her ideal fan experience.

"What I'd like to see is to kind of reclaim some of the ground that I covered with that first record, in terms of people really liking what I do," Tunstall said. "I know that there's many people out there who would like this record. The difficult thing in the landscape now is actually letting people know that you have a record out. There's so much music traffic. It's quite hard to actually get through and let people know. And so, I just want to shout loud, and I feel like I've got a record with powerful songs on it.

"It's a good thing. It feels like it's a positive record. It's emotional. It's very honest. It's very vulnerable.

"Again, harkening back to that first record, it does feel like a kindred spirit to the first record. It's sort of like it's taken three records to write my second album. (Laughs) But I've become quite observational through the process of being a little bit scared to be vulnerable with all those people - millions of people - staring at you and expecting something from you. And that's gone now. So, I just feel I'm in a very carefree place of making music I love again. And free of any sort of shackles of expectation from anybody else."

Tunstall chatted about her new album, her live show (she performs Sept. 15 in Toronto), and her California dreaming.

Q: I've been looking at tour photos. I see you're quite the tweeter. What do you like about that way to communicate with fans?

KT Tunstall: Well, it's just so new. I can hardly believe that, when my first record came out in 2004 (U.K.), there was no YouTube. It's quite hard to remember what it was like before people were able to see what you did and not be there, or get hold of you on Twitter, or let you know how they felt about the show.

I love that aspect of social media - that I can have very open conversations directly with fans, which I never was able to have before.

I think that Twitter really suits my personality, where I'm quite a lateral thinker, and I'll just share whatever thought is on my mind. It's not just about music. It's how people get to know you a bit better.

Some people don't want that. It's something I feel comfortable with, and it's certainly the way that I put on a show. I really love the fact that there are records in the world where there is a real kind of fantasy barrier between the audience and the unobtainable icon, that is the artist. These are incredible acts and incredible shows.

But the thing that I really like to talk about at my show is kind of breaking that barrier down and making for a very open and very connected evening together, where it's really just like hanging out. And I want you to feel like there's a lot of people in my living room. ... And we're making a lot of noise. (Laughs)

So, for my music, it's actually really, really great to have that really personal connection with fans. ... And I love pictures of animals.

Q: Talking about your live show, then, I presume it's more singer/songwriter, and not a lot of production?

KT Tunstall: It's a massive show (actually). There's only four people on stage, but it sounds like there's eight. We've got electronics. The keyboard player has about four different synthesizers that he's running with a laptop. I've got my loop pedals; about four different guitars. The bass player plays a MOOG synthesizer as well as a real electric bass, and he's got a really big, lovely pedal sound setup.

For me, the live show, the last record was a completely stripped back, bare bones folk record (2013's "Invisible Empire // Crescent Moon"). And I toured most of that completely solo. With my loops.

I had thought my feelings for it had gone off to boil, but, in fact, really, when I did a couple of retrospective shows, we were playing a much more upbeat set. I realized that I just have to have a physical experience when I play a show. I need to sweat, and I need reciprocal energy. And it's very difficult for a crowd to do that sitting down.

My perfect venue, because I do have older fans, is to have kind of like a theater style with a balcony, so that people can have a seat if they need one, but there's still that really electric energy of people being able to dance, and people being able to move, and having a blast while I'm doing a show.

Q: We chatted in 2007, and, at that point, everything was new and exciting. And that was one of the things that you mentioned, was that everything you were doing was for the live show - so you could go out and gig. It must've been super-frustrating coming to the point where you had to retool and weren't satisfied with the live show.

KT Tunstall: Yes, I mean, it was a really good show. It was very popular. Folks really enjoyed it. And I definitely enjoyed sharing songs. But, it was just draining me. I was finding it incredibly hard, kind of mentally and physically, to do.

And it's kind of weird, because, the show that I'm doing now, with a three-piece band, I am coming off stage absolutely drenched every night. And it's like a Jane Fonda workout. But, somehow, ... it replenishes me - and I find it revitalizes me. And I find it feeds me. Whereas, the show before, it was very well behaved, and a very earnest show. And I just found it wasn't really - it wasn't a balance of giving and receiving, in terms of the energy in the room.

And it's absolutely not a criticism of my fans, because they're brilliant, and they're always responsive, but it's just the nature of playing to a seated theater.

It's not to say I'll never do that, because I would love to do an orchestral gig of music, and there's certainly times when I'm going to be playing to - there's a few dates on the tour where I'll play to seated gigs in the U.K. It's just, when it's all the time, it wasn't right for me as a musician.

Q: I heard "Golden State," and I was super-jazzed. Then I ordered "KIN," and I'm looking forward to receiving that. I really like the new sound. But, if I'm understanding what you're saying, you sort of came into this (record process) thinking, "I need to have a certain kind of sound to make my show better."

KT Tunstall: Well, I didn't know how challenging it was going to be. ...

The songwriting basically starts with a process. It wasn't really, it certainly wasn't me going, "OK, I want to write an album that sounds like this," because I wasn't going to write an album. I had gone through seven shades of $hit in the U.K., of my dad dying, and my marriage breaking up, and that was all right in the middle of the last record.

And so I literally just sold everything I owned and moved to Venice Beach, in California. And started again. And it was a really transformative move - and one I'm so grateful I made. ...

I discovered Venice Beach and fell in love with it immediately, and just felt that here was a place where I could actually, finally, find some balance between my work life and time for myself. ...

That was the first wonderful thing about it. It was just finally this sanctuary where I could really happily just not do anything - and that's just as important as doing stuff, when you do a lot when you work.

Secondly, I had gone over ... and learned film scoring. And I had done the film composers lab, the feature film composers lab at the Sundance Film Institute, which was one of the most extraordinary learning courses of my adult life. It was so - just so reinvigorating to flex different creative muscles, and learn so much in such a short space of time.

So, I was working on films. I did a couple short films and also wrote songs for movies, and just really building very positive relationships with the film industry.

And, as I was about a year into living in Venice Beach - I listen to music in the car. That's where I most enjoy listening to music is driving - and I was going to Topanga Canyon and Laurel Canyon and driving along the PCH, and listening to Fleetwood Mac and Tom Petty and Joni Mitchell and Neil Young. And it just got into my blood. And the fact that all of this music was made where I was, I could completely relate to why that was: The feeling that that place gives you, and the kind of wide ocean vistas, and the beautiful mountains, and the kind of wildness of the hills.

And I just starting writing these choruses. And my mind and body was, like, "Nooo! I don't want to do it. I want to take a break! Leave me alone." And then, you know, the spirit won.

If it was folk music coming out, I'd probably not be talking to you right now. But what came out, what was coming out, were these really, pretty muscular emotional pop songs, of the kind of power that I didn't feel (before). It just felt similar to the stuff that I wrote on that first album. And I couldn't ignore that. 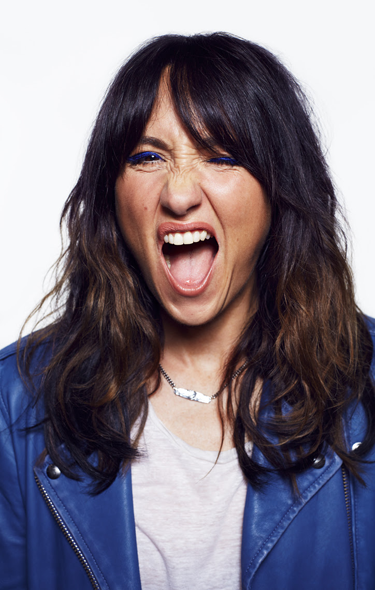