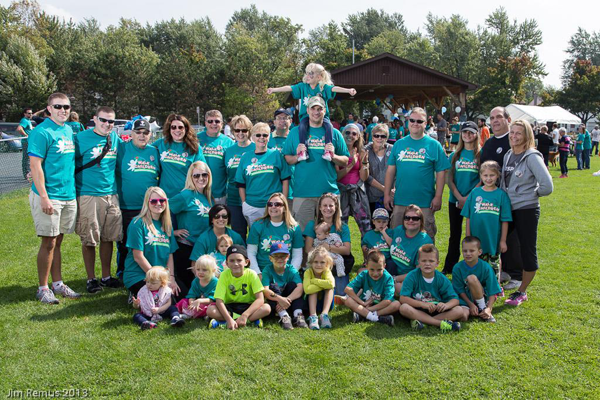 Team Reese's Rooters will take part in the fourth annual Walk for Children with Apraxia of Speech. The team supports Reese Nevans, a 7-year-old Island girl, pictured below with her mother, Bonnie.

Two Islanders are organizing an upcoming fundraiser for programs and research into a rare speech disorder with the ultimate goal of helping children "find their voice."

Bonnie Nevans and her mother, Patty Remus, are co-organizing the 2016 Walk for Children with Apraxia of Speech, a benefit for the Childhood Apraxia of Speech Association of North America. The walk will take place Saturday, Sept. 17, at the Miracle League of Grand Island and WNY pavilion in Veterans Park, 1845 Bedell Road.

Nevans said her daughter Reese, who turned 7 years old Wednesday and is going into first grade at Sidway Elementary School next week, is overcoming the speech disorder with hard work and a positive attitude.

Nevans said this will be the fourth Walk for Children with Apraxia of Speech in WNY, but in a new location, at the adaptive handicapped-accessible Miracle League complex, which she called "a natural partnership." Nevans is hoping for more than 200 participants. Kids from all over WNY are expected to take part, and so far there are 12 teams signed up.

Nevans said CASANA is the only national organization dedicated exclusively to the interests of children with apraxia of speech and their families. CASANA focuses on awareness, support and information, and funding from the event will support research into the causes of apraxia and ways to treat it. Money will also fund training workshops for speech pathologists on best treatment approaches. Money for The iPads for Apraxia Project will help with therapy, as some children use iPads to communicate.

The overall point of the walk is to raise money for CASANA, but as Nevans said, it's also to celebrate "these little heroes, who work so hard every day to find their voice." The event will provide moral support and fellowship for families in the same circumstances as well.

"When I went three years ago, that was the first time that I had met other families who were going through the same thing that we were," Nevans said. "It's nice to be in a community of people that know what apraxia is that can exchange ideas and resources, and just support each other."

Debbie Tilkins of Grand Island, Reese's speech language pathologist, said apraxia of speech in children is a neurological speech disorder that affects the child's ability to plan the movements of the lips, tongue and jaw necessary for speech. It affects about 1 or 2 in 1,000 children but is largely unknown. Nevans said she had never heard of apraxia before her daughter was affected by it from a genetic disorder.

Tilkins said a typical child with apraxia is diagnosed between 2 and 3 years of age.

"Some of the characteristics that you would see are that your child doesn't babble, they're not cooing, they're not imitating sounds, they have difficulty combining consonants and vowels," Tilkins said. Oftentimes, children with apraxia will use one or two sounds, don't continue to use new words from day to day, and may have a word and lose it, or repeat the same word three different ways, Tilkins said.

"We started noticing that she was starting to do those things. She would say a word one day and then we couldn't get her to say it again another day," Tilkins said of Reese.

Nevans said, however, apraxia is not a sign of a lack of comprehension. On the contrary, her daughter comprehends things easily and knows what she wants to say, but just has trouble saying it.

"She was understanding everything," Nevans said. Her peers will often make the erroneous assumption that because they can't understand her, she can't understand them. "Because she can't communicate well, people treat her a little bit differently," she said

Tilkins said, "She can understand, and that's the other thing that you see, is the frustration in the children because they do know what they want to say." A similar circumstance occurs in adults who have had a stroke, but can't conduct the motor planning to get the words out, she said.

Nevans said, "It really was a struggle for a while because she could not communicate with her peers. They would ask her, 'Why do you talk funny?' or they would talk for her, or a lot of times she would be just kind of off by herself because she was sick of having to try and explain herself, when she didn't have the words to explain herself."

Nevans has started giving presentations about apraxia to the children at Reese's school and has even written a children's book about her daughter, explaining the ways Reese is just like her peers and knows what she wants to say, but need to work much harder to communicate.

"That really made a huge difference, the kids knowing about apraxia," Nevans said. "They kind of went from thinking she was weird to kind of being her little support system."

Reese has advanced "light years" with therapy, thanks to Tilkins, who Nevans calls "my speech angel." While Reese still has trouble verbalizing, she can hold a conversation now and communicate with her peers.

"I think every child has a different outcome, depending on the severity level," Tilkins said.

Nevans looks at her daughter's apraxia of speech not so much as limiting, but as a motivator, a catalyst, an inspiration.

"I feel like having apraxia has just turned her into such a resilient little thing," Nevans said of her daughter. "She's so positive and she's so happy, and she just never quits, because she's had to work so much harder for something that just comes naturally to people."

Supporters can attend the event for the walk, enjoy the activities and food, or try their luck at a big basket raffle. The Dirty Bird Food Truck and The Ice Cream Men Truck are stopping at the park. The Grand Island Fire Co. will bring a fire truck. 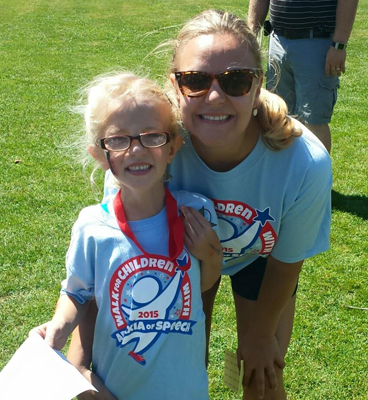 2016 Walk for Children with Apraxia of Speech

Where: The Miracle League of Grand Island and WNY pavilion in Veterans Park, 1845 Bedell Road.

Proceeds from the event will benefit programs and research at The Childhood Apraxia of Speech Association of North America. Register online at www.casana.apraxia-kids.org/WesternNYWalk.