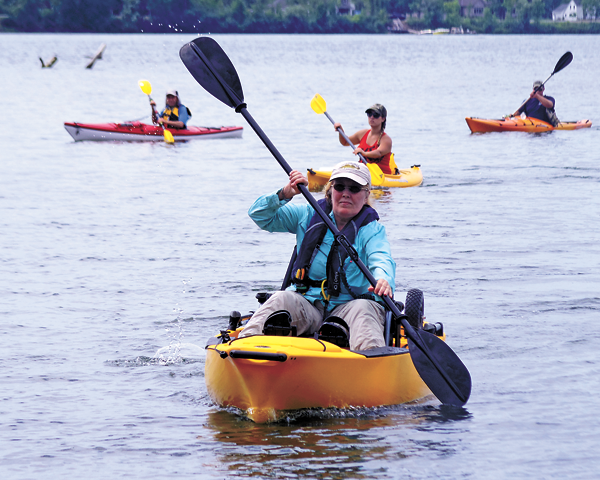 Marine law enforcement has reported a surge in kayaking use - and problems on area waterways. (Photo by Alice Gerard)

Summer is nearing its end and, with that, another boating season on the Western New York scene.

With Buffalo-Niagara's advantage of abundant water resources - two Great Lakes, plus numerous rivers, creeks and smaller bodies of water throughout the area - recreational boating has and continues to be on the upswing.

One activity that has seen a major surge in past months has been the use of kayaks, paddle and water boards, canoes or similar self-propelled water vehicles on area waterways. You've seen them at Canalside, on the Niagara River, in the Erie Canal, out in lakes Erie and Ontario, and more. Local residents and visitors to Buffalo-Niagara have a love of being on the water that continues to grow.

And with this popularity in smaller watercraft, particularly with kayaks, there's also been a host of problems, according to law enforcement patrolling the area's waterways. As summer boating wraps up, they point to a number of areas that need to be corrected: Things like kayak operators and others of similar vehicles not prepared to handle their craft; being unfamiliar with the complexities of area waterways; not having life jackets, whistles, radios, lights, flares or other forms of communication; being oblivious to boating laws, the presence of other boaters and a complete understanding of boater etiquette; or putting themselves and others in unwarranted danger.

The U.S. Coast Guard, U.S. Border Patrol, sheriff's office marine units in Erie and Niagara counties, marine responders from Ontario, plus area fire companies have all reported an upswing of problems attributed to recreational kayakers and boarders and their apparent lack of understanding and preparation on the water.

"Due to an alarmingly high number of paddle craft-related accidents and deaths in the Great Lakes in recent weeks, the Coast Guard is reminding kayakers, canoeists and paddleboarders to paddle safety," a U.S.C.G. advisory read. "The single most important thing paddlers can do to protect themselves is wear a life jacket at all times while in the water. In the past few weeks, we've seen an increase in paddlecraft cases where paddlers unexpectedly capsize while not wearing life jackets, get separated from their vessels or are unable to enter, and have trouble staying afloat while waiting for rescue.

"Most paddlers can survive for hours in the water if wearing life jackets, but survivability is greatly decreased when not wearing them."

BMC Adam Pedzich, officer in charge of U.S. Coast Guard Station Niagara in Youngstown, reports this summer has seen an average of one fatality per week attributed to kayaks throughout the five Great Lakes. While Buffalo-Niagara has not recorded a fatality thus far, other areas, such as those around Lake Michigan, have not been so lucky.

Pedzich recalled one such incident involving a family that occurred in the Coast Guard's Detroit sector earlier this summer.

"They became swamped," he said. "The children had life jackets on, but the parents did not. Both children and their mothers were recovered safely. A deceased male matching the description of their father was recovered. So you go from having a great day, to these terrible days."

"We have been fortunate this summer," Pedzich said of the lower Niagara. "About a month ago, we had a search and rescue case where a gentleman off of Lewiston ended up. His kayak had flipped over, and he couldn't get back into the kayak. So we had to go out and assist him.

"He was fortunate, he had a waterproof case for his phone, so he was able to call for assistance. It was right before sunset, so it could have been very bad.

"Specifically we haven't had, fortunately, any incidents here. But in the Great Lakes right now, we are averaging a fatality a week out of the five Great Lakes. Any is too many."

"A lot of them are preventable," he added. "With the hot summer that we've had, it's just been an explosion of the kayaks, the canoes, the paddleboards, and people going out.

Pedzich suggested newbies cruising area waterways, be they kayakers, paddleboarders, etc., should better prepare themselves before entering the water.

A life jacket is a good place to start.

"People buy the kayak, paddleboard or the canoe, and they just don't understand that you're still required to have a life jacket," Pedzich said. "It needs to have a whistle. If you're going to be out at night you need to have some type of all-around white light with it.

"What we're trying to do is get the word out," he said. "You know there's no requirement that you have the life jacket on, but that's what we strongly encourage. There's a lot of times, by the time you need it, it (may be) jammed in the front of the kayak, or it drifts away from you. We would encourage people to wear it.

"Look, everyone just needs to find a way to share the waterway. The paddleboards and the kayaks are here to stay. So we just need people to be safe when they're using them."

Pedzich, whose Youngstown Coast Guard station staff patrols area waterways, from below the falls out to Lake Ontario near Rochester, said that, for pleasure boaters, as well as recreationists, it's best to be prepared, because his boats are out there, and they will stop you.

"We're responsible from the basin of the falls over to Oak Orchard," he said. "We are targeting that area. Obviously, with the paddlesports, they are more centered around the river. (Also) Wilson and Olcott, we are seeing people really far into the lake, two-three miles out."

"(What) you don't realize is how quick the weather can change," he added. "That's been (the case with) some of the fatalities in other parts of the Great Lakes. The weather changes."

And then there's the current - particularly with the Niagara River.

"That's the thing," Pedzich said. "We have helped out a lot of people. They're going downstream with the current, doing really well. Then, all of a sudden, they turn around and fight, pretty much uphill, back against the current in the river. And we've had some people get exhausted. We've had to go out and give them a hand, or they'll paddle over to the station and we'll give them a ride."

Yet another area of unfamiliarity involves the border. Pedzich said kayakers and paddlers often like to cruise the center of the river. But they don't know the U.S.-Canadian border, where it changes in the river, and, most importantly, the boating laws in both countries and how they differ.

"That's the thing on the river, it's separated down the middle, but (a lot of people just don't realize) ... it's two separate countries," Pedzich said. "It's a very common thing. ... It's two sides. And if you're on a kayak or a paddleboard on the Canadian side, you actually have to be wearing a life jacket. In the U.S. you just have to have it with you, unless you're a child. Then you have to have it on.

"It's just the way the law is written. So they (kayakers and boarders) just have to have it with them. There's federal law that we enforce, then there's NYS law."

"I know it can be confusing for people," he said. "We just encourage if you're out on a kayak or a paddleboard, just wear the life jacket, for safety. And have that whistle on board, too."

Pedzich said the Youngstown Coast Guard crew is very active with its Canadian counterparts when it comes to patrolling the river.

"We run a program out of here called 'ship rider,' " he said. "We have officers along with the Canadian RCMP that have all been to the federal law enforcement training center in Charleston. They go to an eight-day school together. So, when we actually ride together, we can enforce, when we're on the Canadian side of the border, we can enforce Canadian law, and when they're (the RCMP) on our side, with us, we enforce U.S. laws."

"During these patrols we do every week with them, we have also been getting out the word to kayakers and paddleboarders, because so many people just zigzag back and forth across," he added.

So what's the best course of action for those newbie kayakers, paddleboarders and similar enthusiasts?

Pedzich reported that, for the balance of this year, U.S. Coast Guard Auxiliary members will cruise area waterways and visit area local harbormasters with information to share for kayaker and paddleboat users, and they intend to do the same thing with kayak dealers and sporting goods stores over coming months.

"They do the boating safety outreach, the stickers," Pedzich said. "We have a very active flotilla. They're going to talk to all the harbormasters, and try to get the word out."

"Look, people buy these things, they seem great. We want everyone to go out, use their kayaks, or paddleboards. We just want people to be safe. There's nothing worse than having to go out on these search and rescue cases," Pedzich said.