Town of Niagara: Board eyes tax cuts for those who rehab 'zombie homes'

The Town of Niagara Town Board is discussing providing tax incentives to those willing to purchase abandoned homes in the town, fix them up and, eventually, live in them.

"We're trying to be a little proactive here, making it a little more enticing for people to buy homes that are quote unquote 'zombie homes' in our town, and actually live in them - not buy them and leave them set," Supervisor Lee S. Wallace said at Tuesday night's Town Board meeting. "And we will work through a variety of incentives for those people who do that."

This opportunity would not be available for those looking to purchase the properties and flip them for resale or rent them to outside parties.

The town still has to determine the requirements of what defines a zombie home, Wallace said. He added there are various degrees and factors that could be considered when defining a zombie home.

"It will be a long process, but we have to give it a try, see if we can get this accomplished," Wallace said.

The town will also work to hold those responsible who buy up the abandoned structures as foreclosures and decline to repair or maintain them.

"We're going to hold the banks accountable if they leave them and don't do anything to them," Wallace said.

The town has also been working to identify and contact owners of uninhabited homes to determine whether they should be repaired or demolished.

To further encourage cleanup efforts in the town, the board agreed to ask the town's building inspector Charles Haseley, to inspect the lot adjacent to K-Mart, which is owned by the company, for all building, property maintenance and town code violations. This could result in the issuance of violation letters to the company relating to weeds, parking lot conditions and light standards, among others.

"There is a big section of the lot that they have let go and it's a deplorable situation on our main road, and we're trying to hold their feet to the fire," Wallace said.

Councilman Marc M. Carpenter said, "Hopefully, they can try to take care of that lot a little bit nicer than (they have) been. I wish they would sell it. Maybe put up another business, because I don't think they really need to have a parking lot that large."

•The Town Board approved the site plan for a new Tim Hortons at 7400 Military Road, conditioned upon granting of variances by the town's Zoning Board of Appeals.

Wallace said he lives nearby the site of the proposed cafe, and understands some residents may be concerned about increased traffic to the area, "But sometimes that's what happens when you have progress. And eventually something was going to go there."

He said the new location will, hopefully, help alleviate some of the traffic at the other Tim Hortons at 2720 Military Road.

•The board presented a plaque to owners and staff of Marsh's General Store at 7535 Packard Road, for 75 years of service to the town.

"It's very commendable that a mom and pop store survives through that kind of time," Wallace said. "In today's day and age, with what you're up against, (it's) very commendable." 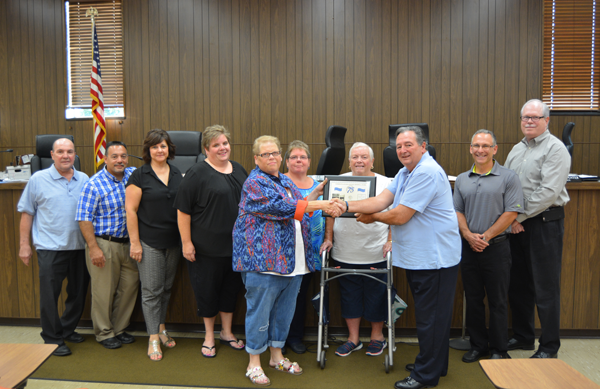 Town Board members pose for a photo with owners and staff of Marsh's General Store to acknowledge the store's 75th anniversary.