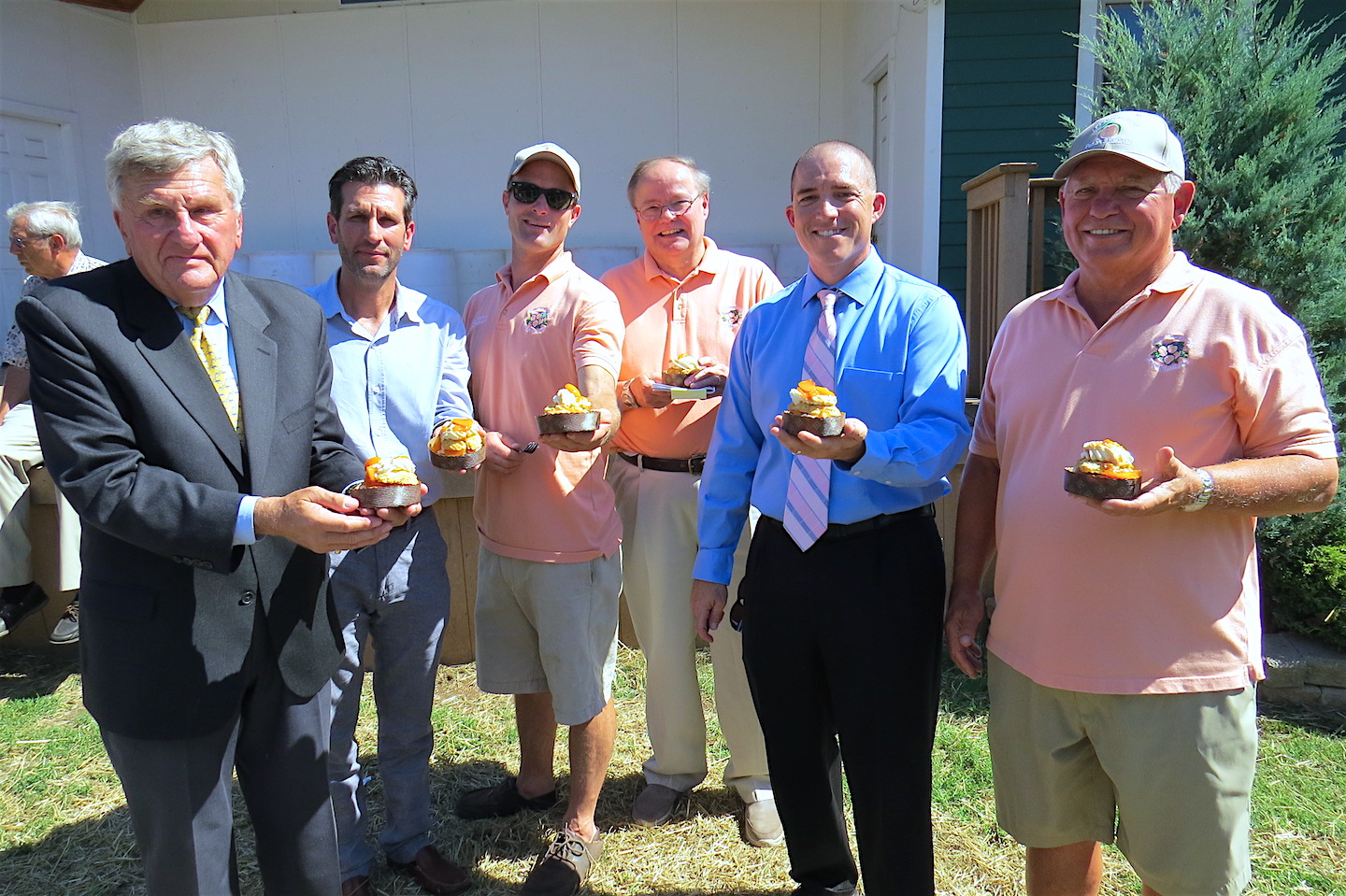 The Kiwanis of Lewiston held a news conference Wednesday at Academy Park in Lewiston to announce what's new at this year's Niagara County Peach Festival, and to detail the schedule of events. The 59th annual event will be held at the park the weekend of Sept. 9-11.

Peach Festival Chairman Alan Hastings said he anticipates a crowd exceeding 30,000 - weather-permitting - and one of the most successful events since the first one in 1958. Since that very first Peach Festival, the Kiwanis Club of Lewiston has contributed over $1 million in goods and donations to area charities and organizations from event proceeds.

One of the new items announced by Hastings is the Niagara County vendors program, which identifies county participants with signage at the festival. Hastings also emphasized the fresh peaches used for the peach shortcake are grown in Niagara County, at Bittner-Singer Farms in Appleton. This year, the Peach Festival is expected to serve more than 13,000 pounds (6.5 tons) of locally harvested peaches, along with the fresh shortcake made by the famous DiCamillo Bakery.

In all, there will be 22 food vendors serving a wide variety of American and ethnic cuisine.

Amusements of America will again be the ride company at the Peach Festival, this year supplying 44 thrill rides, as well as family and kiddie rides, making it the largest midway in Niagara County.

Advance ride tickets are now on sale at a 50 percent discount at 40 locations throughout the River Region. The discount locations can be found on the Peach Festival website, at www.lewistonpeachfestival.org/ride-tickets.

The Kiwanis Club and Amusements of America will also honor tickets purchased in 2015, when the event was doused with rain.

This year's Peach Festival schedule begins 5 p.m. Friday with local first responders serving as the color guard. Both the American and Canadian national anthems will be sung. At 6 p.m. a cheerleading competition, featuring local units representing youth football and all-star cheering squads, will take place at the Academy Park bandshell.

Saturday morning begins with the 38th annual Peach Festival 5K Run. This year's proceeds will go to Carolyn's House of Niagara Falls, and the Kiwanis Key Leader program. The race is sponsored by DiMino Tops Lewiston, Niagara's Choice Federal Credit Union and the Kiwanis Club of Lewiston. Entrants can register at www.racemanagementsolutions.com. 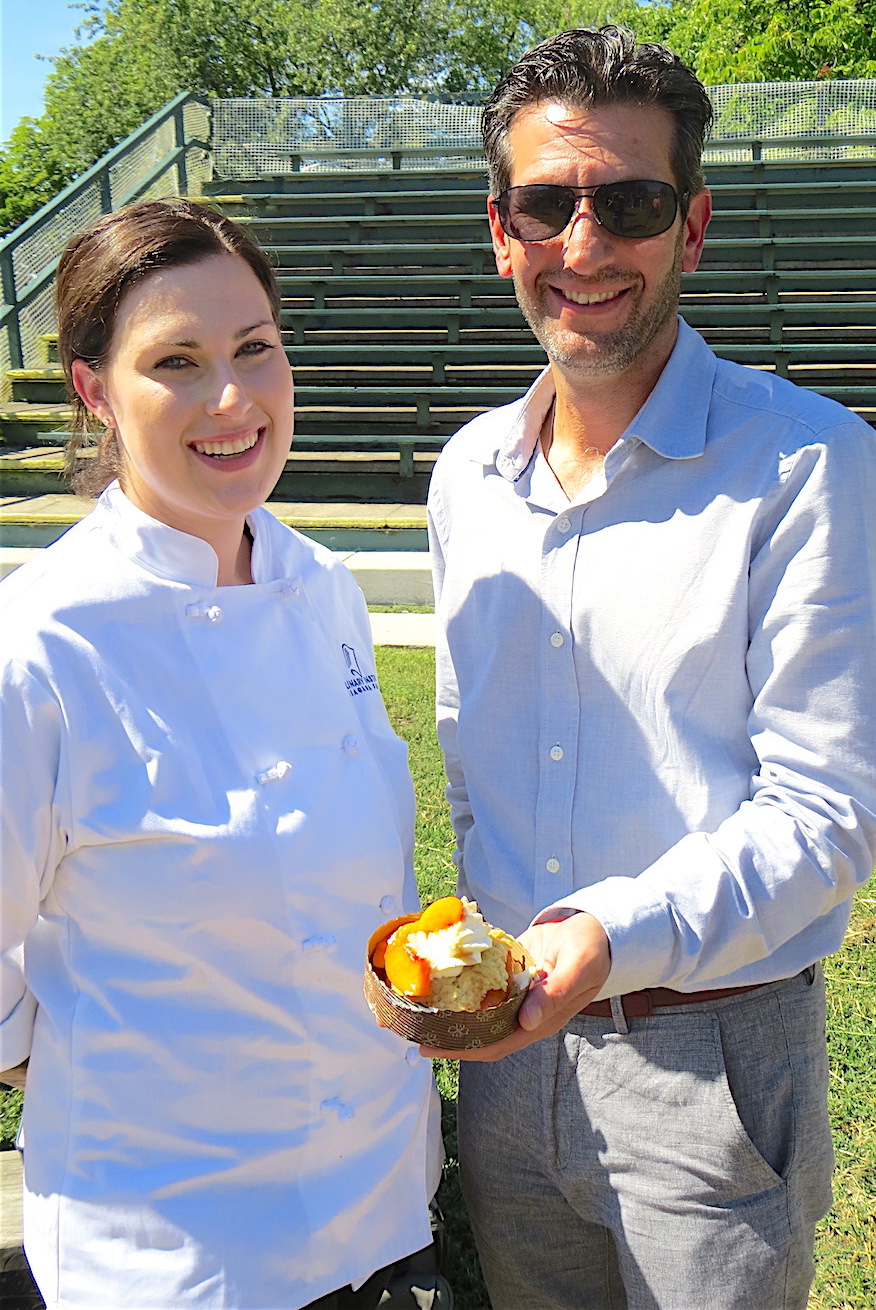 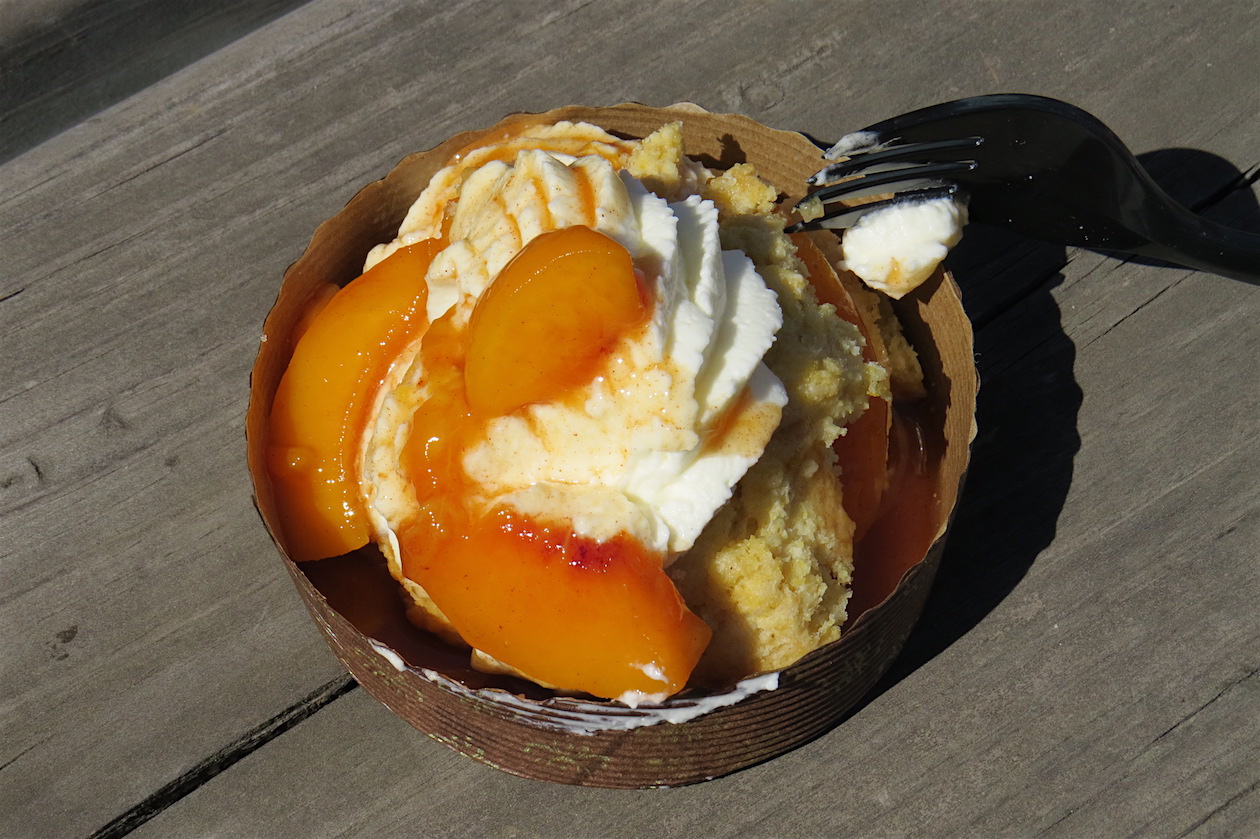 The peach recipe "Taste Off" competition is sponsored by the Niagara Falls Culinary Institute, the Niagara Gazette and Niagara Frontier Publications. The three categories include "food enthusiast," "culinary student" and "children." Entrants can win up to $500 in prizes.

The finals for the "Taste Off" will be held at 4 p.m. Saturday on the Academy Park stage with judges Lynn Catalano from the Foundation for Jewish Philanthropy, Niagara County Community College President James P. Klyczek, Mark Mistriner of the Niagara Falls Culinary Institute and Brenda Alesii, food author and host of "Brenda's Bites" on 1520 AM.

The Peach Blossom and Peach Fuzz contests for the youngsters will again attract more than 50 contestants. They will compete Saturday and Sunday afternoons.

The "dance showcase," featuring 10 area dance companies, will take the stage from noon to 3 p.m. Sunday.

The Peach Festival will be capped off at 8 p.m. Sunday with Peach Queen pageant finals. This year, 14 young ladies from Niagara County have entered the competition hoping to win the Peach Queen crown - and the $4,000 scholarship awarded by the Kiwanis Club. WGRZ news anchor Maryalice Demler will host.

The Peach Queen contestants are currently collecting back-to-school items for the Magdalene Project (http://www.magdalene-project.org/) afterschool programs. Those interested in donating can drop off school supply items prior to the festival at the Niagara River Region Chamber of Commerce office, 895 Center St., Lewiston.

The full schedule of Peach Festival events is available at www.lewistonpeachfestival.org. 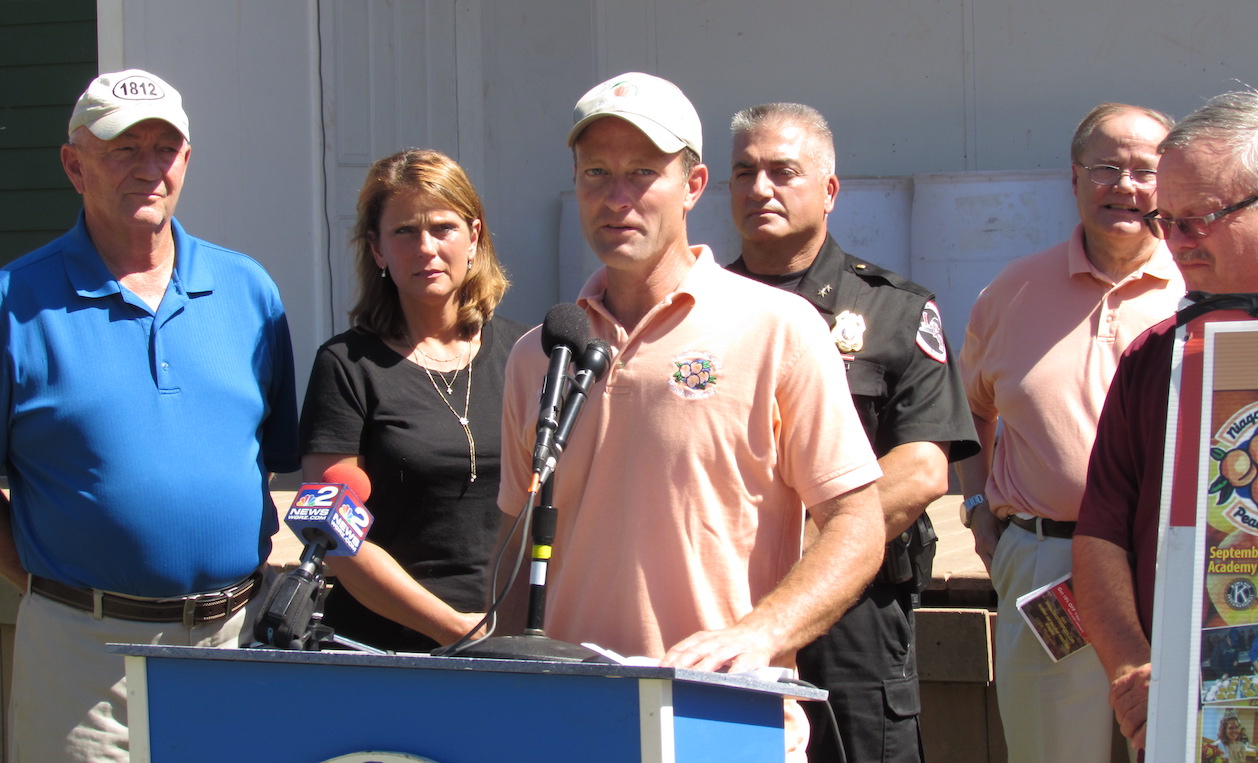 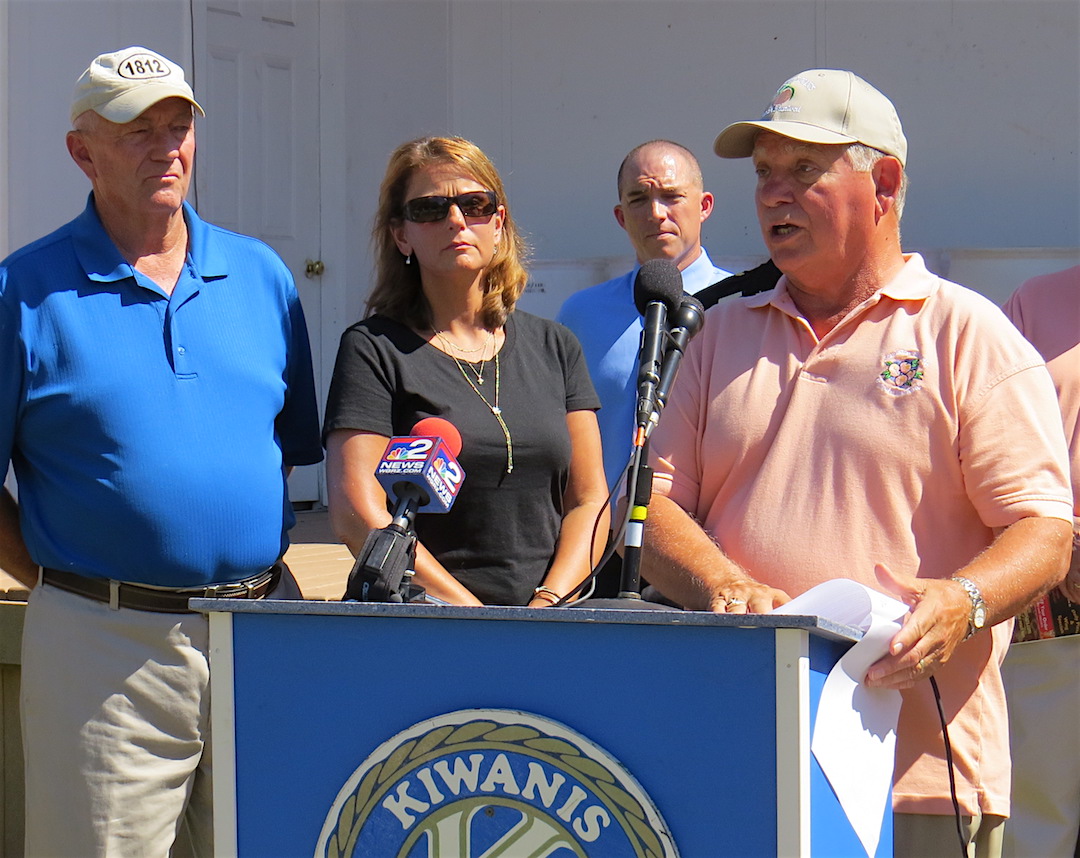 Randy Gorzka at the mic. 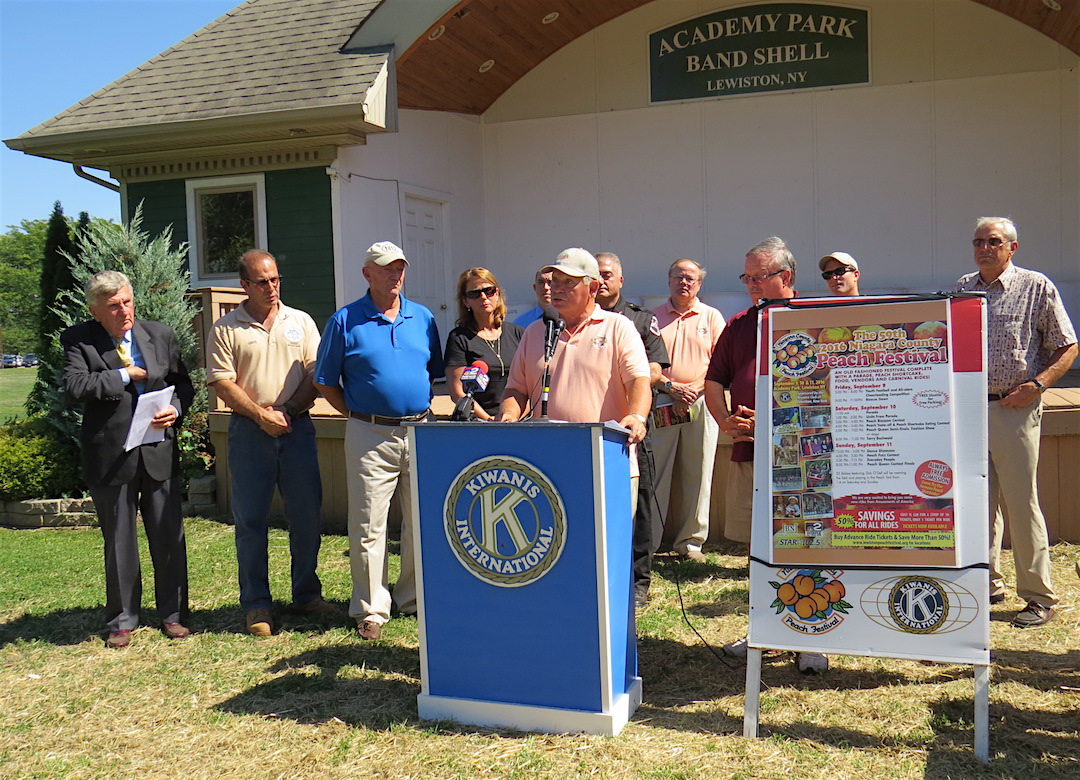