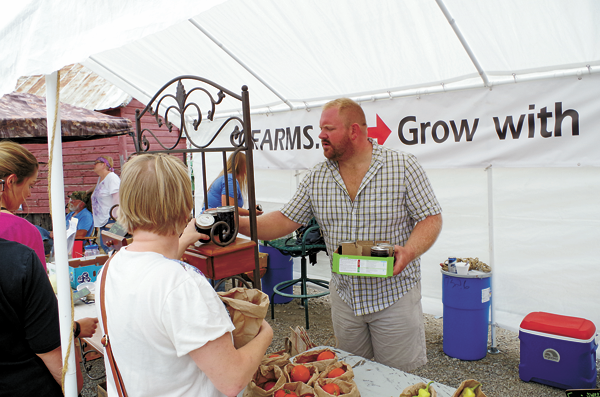 A new farmers market on the Island is growing in popularity in its first summer of operation.

The GI Farm Cooperative has established its own marketplace at 2487 Long Road, a farm owned by co-op member Tom Thompson, to sell members' products on Mondays from 4 to 7 p.m.

The co-op, which includes about 40 agriculture enterprises on the Island, allows vendors space to set up tents at the farm and sell their goods.

Thompson said Monday the reaction to the new market from the public has been "great. We've had overwhelming response."

The driveway at the Thompson farm Monday was full and business was brisk. Customers learned soon after the market began this summer that they need to get there early if they want corn or eggs. Those sold out again Monday.

The venture is unlike markets in places like Buffalo or North Tonawanda, where out-of-town farmers bring produce to market, but rather is an initiative of the 40-some members of the Island (GIFarms.org).

"This is an effort of the co-op on Grand Island," Thompson said. "About as grassroots as you can get."

The co-op is so successful already that members are working on plans to extend an existing building and put in a refrigeration and freezer area, and then get certified kitchen space. The plan for the building is to have a place where co-op members can have a permanent outlet.

"We'll end up over here with a year-round store, so that after the growing season we'll be able to continue to have things in the store," said Keith Tripi, co-op member. People will be able to come in and purchase non-seasonal items like eggs or maple syrup, for example.

The market is just the beginning for the co-op. "We've got a lot of little things in the fire," Thompson said, noting he and five others from the co-op will travel to Cornell for an organic farm conference. In November, Thompson plans to go to "ag school" for a state farmers market federation conference and certification program in Ellicottville "so I can be a professional," he said, laughing. "Not just doing it from the ground up."

Islanders who have sold vegetables from roadside stands now have higher visibility and a broader customer base, greater than the market of just those people who drive down their road.

Patricia and Stephen Birtz had varieties of vegetables for sale Monday that they grew on their Fix Road property, including several types of garlic, enough to ward off every vampire on the Island. They sold as much at the co-op for three hours Monday as they do at their roadside stand in front of their house all week, Patricia said.

Tripi also noted the market is turning into a social event on Monday. Not only does the co-op offer customers the opportunity to meet the farmer who actually grew the food they're buying and eating, but Islanders are hobnobbing with their neighbors, just like they do at a big grocery store.

"It's a real community thing that you see kind of evolving," Tripi said.

The co-op itself serves to represent the 40-plus Islanders who have joined a local agriculture district.

The dry summer caused Thompson to lose 40 percent of his crop because of lack of water, Tripi said, and irrigating crops is too expensive currently. The co-op is asking the town government for relief because, according to Tripi, water costs 180 percent more east of the I-190 due to sewer charges than on the other side of the Island without sewers.

"We're trying to get the town to move in the direction all the other towns have, where they allow separate metering if you're doing irrigation for farm use, and just focusing on the 40 farms that are in the Ag District, so he'll be able to afford to purchase water and irrigate as he needs," Tripi said.

Thompson explained the farms are not putting a drop back down into the sewer system anyway.

"It just goes out, it never goes back in," he said.

The marketplace also has non-food items, like Amish furniture. Monday was the first day selling at the co-op for homegrown artist Danielle Nash. After a family friend told Nash the co-op was looking for more than just farmers to market their products, she brought her tent and paintings. She said that, as opposed to Allentown or Lewiston art festivals, there is no fee to have a space at the co-op.

"It's great exposure and it's cool," Nash said of the market.

"I think it's wonderful. I think it's awesome having a farmers market here on Grand Island," she added. "I had no idea there were 44 family-run farms on the Island." 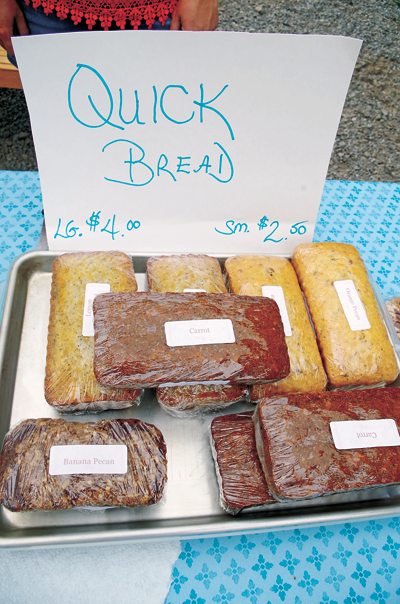 Get quick bread - like carrot, orange pecan and banana pecan - at the market.