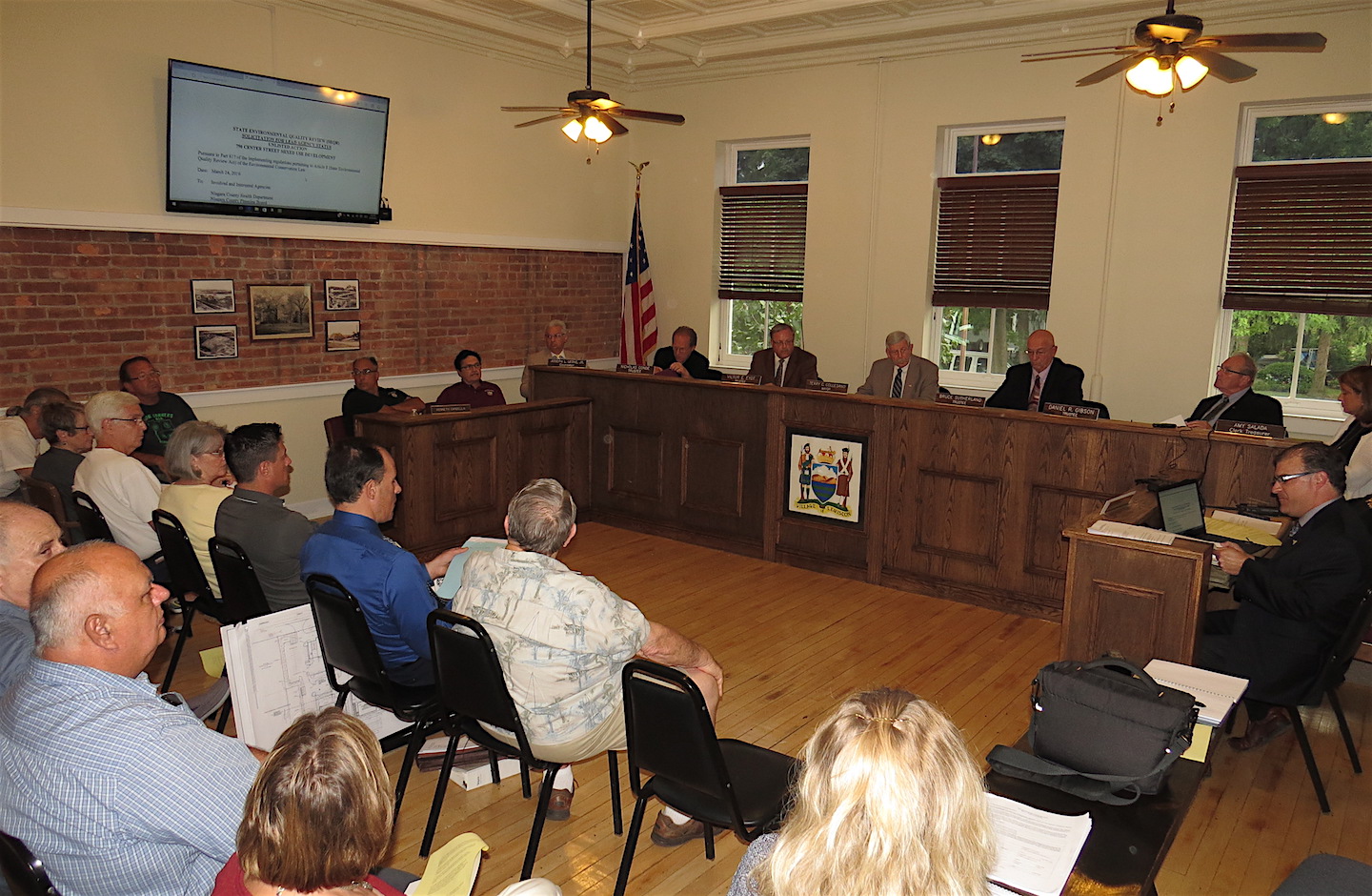 The Village of Lewiston Board took no action Monday on the State Environmental Quality Review of Ellicott Development's plan to build a 4.1-acre mixed-use plaza on Center, North Eighth and Onondaga streets. Residents raised questions over the SEQR results -- developer William Paladino answered some of those inquiries after the meeting -- and trustees opted for more time to study the SEQR before ruling on the project's environmental impact.

Over the course of 30 minutes, Village of Lewiston Engineer Michael Marino, of Nussbaumer & Clarke Inc., meticulously explained the SEQR's 13-page first part, a full environmental assessment form completed by the developer's engineer, R. Christopher Wood of Carmina Wood Morris, and the 10-page second part, an EAF he filled out on behalf of the lead agency, the village.

The former serves as an application for approval, while the latter provides the municipality the opportunity to identify potential project impacts.

Though the SEQR inventories "all potential resources that could be affected by a proposed project or action" -- everything from excavation to water to waste to air quality to geologic features to energy to plants and animals -- residents were primarily interested in water capacity and the potential for flooding, as well as the traffic impact on the neighborhood.

Second Street resident and former Lewiston Police Department Commissioner Al Soluri asked if there was going to be an increase in sewer capacity, and wondered what would go to the wastewater treatment plant.

Marino answered, "They are required to do this downstream capacity analysis. They did their calculations of what sewage they'll be contributing to the system, and working with DEC, as well as the sewage plant, we worked through their process. They are basically required to make space for their sewage. They have a volume that they're discharging to the sewer system. That number was multiplied by four. And they need to make provisions in the sewer system by correcting inflow and infiltration problems."

"They're going to have repairs done to our sewer system to prevent rainwater coming in," Marino said.

He added, "We've taken their (peak) volume, multiplied it by four, and we're going to do corrective measures before their system goes online to remove that from our (allotment.)"

South Fourth Street resident W.E. "Skip" Hauth said, "A number of the (neighboring) residents have complained about flooding in that area (of Eighth and Onondaga streets). They're concerned. ... It would suggest to me that, somewhere along the line, somebody needs to be able to do the assessment of what happens when you turn 100 percent green space" -- as the Ellicott Development property primarily is now -- "into 25 percent green space. You have all of that impervious surface, and you have the water runoff. How much water does it take to fill the system, at what rate, and how fast can it drain?"

In February, Department of Public Works Superintendent Terry Brolinski said, "I love the stormwater plan. Even with the lack of green space, the unit that they're going to use is an absorption unit. So, basically, what's going to happen is this stormwater is going to come into these units, and the ground is going to absorb it. And I've seen one of the plans ... it was soil that will absorb the water."

After the meeting, Paladino, Ellicott Development's CEO, said, "We'll have to do some additional things to (Lewiston's) system to help improve it, based on what we're doing on our site right now. Right now, it's just water. It's wherever it wants to run right now, which, it's going to enter the system somewhere.

"All the water under our development plan will be contained on site. No new additional water will be passed into (the village's) system. And with the sanitary, whatever we do to increase the sanitary, we will make corresponding fixes to the system, too, where it will actually probably be better at the end of the day." 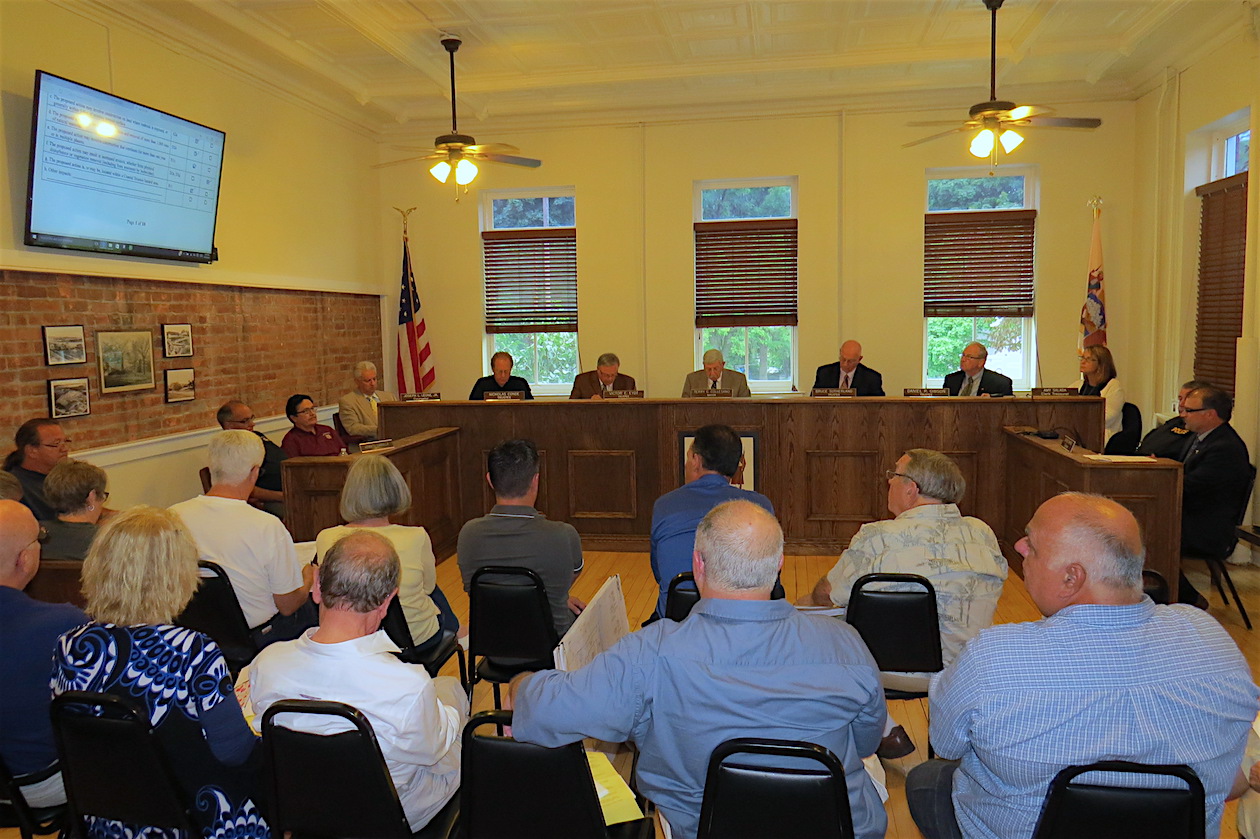 The Village of Lewiston has inquired if the New York State Department of Transportation would consider a traffic light at Center and Eighth streets, primarily due to added traffic a plaza would generate, but also because of the steepness of the Eighth Street inclines. The DOT has said such a measure is not presently needed and, essentially, declined to connect the dots in terms of the plaza's impact on traffic.

Ellicott Development commissioned SRF Associates to create a traffic study. The report stated, "Based on the projected trip distribution patterns ... exiting traffic is not expected to adversely impact the residential neighborhood to the north."

Marino said, "In terms of the way DOT looks at things, it's level of service on the road. And then, based on certain levels of service, there's a warrant for a signal, or a warrant to make a change. Based on the traffic study, yes, there's increases in traffic, but it didn't exceed any of the warrants to require a signal at this point."

He noted, as did Trustee Vic Eydt, DOT may reconsider the need for a traffic signal at Center and Eighth streets if and when the plaza is built. Eydt said a light is needed.

"My thoughts are ... put a light there. Take the light at Portage and Center and just turn it into a blinker. Then they can use it for Artpark, and the stop and go off Portage," he explained.

Paladino said he would be willing to work with the village in advocating for a traffic light.

"We've done that in a lot of other communities, too," he said. "The same issue they're having here is the same issue we have in other communities right now that we're working in, where, once the project's done, we'll come back every six months, a year after that, and just see if it's warranted at that point in time. Additional studies will be done, which will show either it is or it is not warranted."

In past meetings, the Planning Commission asked Paladino to make the plaza's Center Street roadway entrance-only. They said in-and-out roadways at two plazas across the street are hazardous. Planning chairs Norm Machelor and Anne Welch were emphatic a plaza exit onto Center Street would be dangerous to passersby.

The traffic study agreed this is the safer option. It read, "the enter-only maneuver reduces the potential points of conflict for entering and exiting traffic ... thus improving the safety of the intersection for all users."

Onondaga Street resident Teresa Sharp Donaldson disagreed, and asked the Village Board if it could override the Planning Commission's recommendation. Members said "Yes."

"The original plan of the developer's proposal included an entrance and an exit from Center Street," she said. "I still want to go on record as saying I think it would be smarter, if you're going to come in from Center Street, to allow a right-hand-only turn back onto Center Street, instead of spin all that traffic ... on two residential streets."

"That would also direct traffic into the commercial district, which is what I would think that we would want," she said.

Her husband, Rich Donaldson, said that, if the plaza is built, North Eighth and Onondaga streets would be as congested as they were over the past weekend with the Lewiston Art Festival.

"We'd all agree that that's pretty heavy traffic. It's going to be every day," he said.

The traffic study revealed the plaza is expected to generate roughly 71 entering and 66 exiting new vehicle trips during the afternoon peak hour (5 p.m.), and 134 entering/125 exiting during the Saturday peak hour (noon).

Trustees said they would look at the merits of making the Center Street roadway in and out.

If the Village Board asks Paladino to make that change, he said, "I'd have to look at it, because it affects the entire site plan, increasing the width of that driveway again.

"Once they (the Planning Commission) wanted and then requested that that entryway was decreased in size to make it one-way-in-only, obviously we modified the rest of the plan based on that. So, increasing that again may cause a need for ... sizabilities may change. Drive lanes. More parking may be needed. Again, I'm not sure."

Part two of the SEQR advises the lead agency to "answer the question in a reasonable manner considering the scale and context of the project." In hearing Marino's analysis, and reviewing the document answers, some residents described the process as subjective. As such, they asked Marino to reconsider some of the categories marked "No or small impact may occur," particularly in the categories related to traffic impact and consistency with community character.

Answering the questions, however, is not completely arbitrary, as the SEQR provides parameters for what constitutes "No or small impact may occur" or "Moderate to large impact may occur."

Marino said, "I often look at it kind of in light of the end product, and how will it be mitigated."

In an email Tuesday, he said trustees will review part two of the SEQR once more, and make modifications based upon Monday's public comments and their own evaluation.

Prior to the start of the public comment period on Monday, Mayor Terry Collesano asked residents to stay on topic. "We will, in the future, have a meeting, which will be an open meeting to the public ... on the project itself. Tonight, it's only on the SEQR, which is a step, by law, that we have to follow," he said.

Last week, Collesano told NFP his board would not vote on the plaza project itself. He said trustees wanted more time to review the proposal.

Eydt said, "I have some more questions, and I want clarification. It's an education process, right now."

Part one of the SEQR was completed in January and revised in March. Comments from interested government entities, including the state offices of parks, transportation and environmental conservation, were received in April and June. Additional correspondence regarding project design and soils was received from Carmina Wood Morris on July 11.

Part two of the SEQR was completed last week, based on the information provided.

The Niagara County Planning Board ruled the plaza project of no countywide significance on June 20, while the Village of Lewiston Planning Commission approved the plaza project's second submission on July 11. The Zoning Board of Appeals granted Ellicott Development eight codebook variances on July 21.

The next Village Board meeting, a work session, is scheduled for 6 p.m. Tuesday, Sept. 6, in the Morgan Lewis Boardroom at the Red Brick Municipal Building, 145 N. Fourth St. 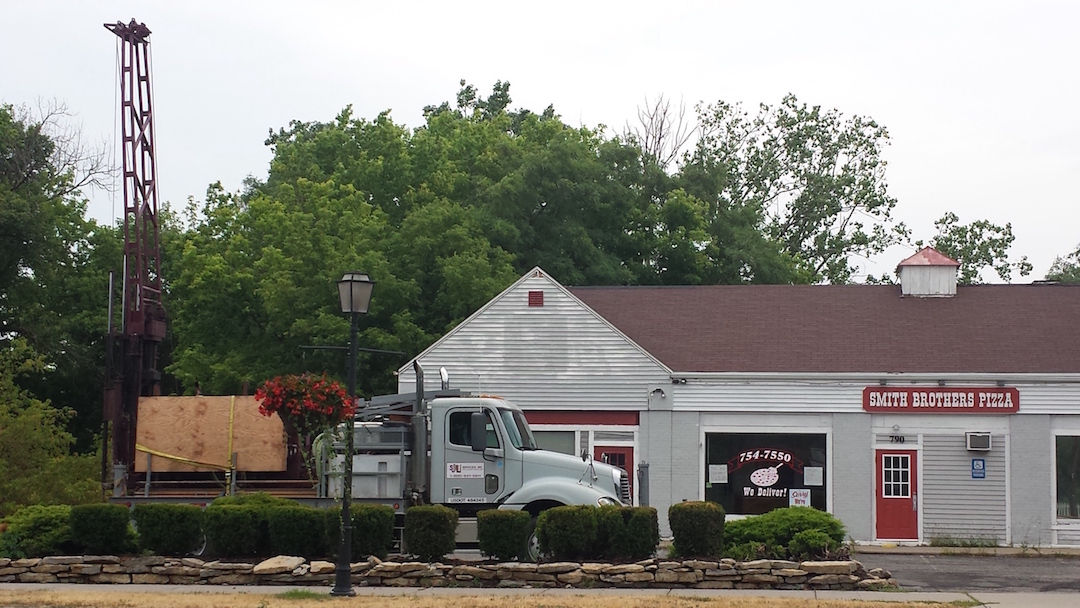 At the ZBA meeting last month, Ellicott Development attorney Sean Hopkins of Hopkins, Sorgi & Romanowski said Ellicott Development is studying its 4.1 acres of Lewiston property to determine if a proposed plaza project would qualify for brownfield status, related to cleaning up contaminated soil.

Following the July Village Board meeting, Ellicott Development initiated additional geotechnical study at its Center Street property (pictured). On Monday, Paladino said "the majority of the contamination" is located near the former pizzeria unit. His company is making plans to remediate the soil.