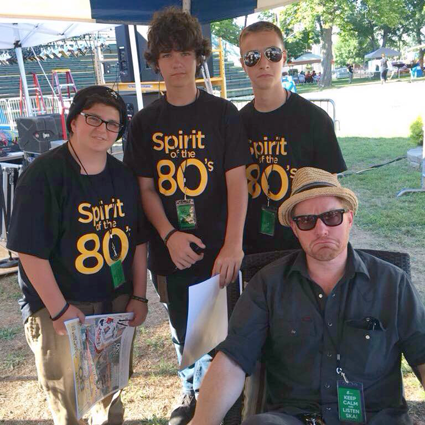 The Minions, who worked last year's Spirit of the Eighties.

Spirit of the Eighties to include young musicians

Spirit of the Eighties Event Coordinator

In addition to Spirit of the Eighties scholarship, awarded to graduating Lew-Port seniors furthering their education in music, festival organizers would like to help fund programs offered at Lewiston Music.

Owner/operator Tony Petrocelli has been a supporter of Spirit of the Eighties since the beginning. Last year, he played an acoustic set before headliner Stan Ridgway. He also helped us round up some young roadies.

As organizers of this festival, we really want to give teens an opportunity to experience the many different aspects of a live music event. We want them to see all that goes into a performance, besides the few people in the spotlight singing into the mic. Someone is operating that spotlight and tuning that mic. And there are many people doing "grunt work."

Last year, we had a small group of boys who worked tirelessly all weekend. They were wearing bright yellow Spirit of the Eighties caps and Ridgway dubbed them "The Minions." They had a great time and were truly a help to us "old" folks trying to relive our youth. We are hoping they will bring some friends this year who are ready to work hard and are serious about learning how to put on a concert.

Petrocelli is also supporting the festival for the fifth time by providing the backline setup.

A backline refers to equipment that runs along the back of the stage, such as amplifiers, and often includes a drum kit. This is very helpful in a festival-type environment, where multiple bands have to set up quickly and may play relatively shorter sets. It can also be helpful when bands are coming across the border or traveling in from out of state to perform at a single show.

Festival favorites The Mirrors are flying in from Florida and Texas to open for headline act The Spoons. They will bring their keyboards, synthesizers and electric guitars, but if they had to also bring amps, it would be cost-prohibitive. Having microphones and other sound equipment at the venue makes these kinds of events run much smoother.

Before the Mirrors take the stage at 7 p.m. Saturday, Aug. 13, popular local alt-rock band No Vacancy will play at 5:30 p.m. This is a group of current and former students of Lewiston Music. I watched these guys play an early show at a local bar and restaurant last week. Though none of them are old enough to order a drink, the patio was filled with patrons, most of whom seemed like they had come there specifically to see this band.

I spoke with some people who know lead vocalist John Cimino. I mentioned how pleasantly surprised I was to hear the soulful voice that came out of this fair-haired, neatly dressed young man - who I thought looked more like someone who would be playing golf than playing in a rock band (not that he couldn't do both.)

No Vacancy covered songs I don't usually hear at these sort of bar shows, by bands like Oasis and the Red Hot Chili Peppers. Mutual friends of Cimino informed me his singing was just a fraction of this kid's musical talent. He can pick up pretty much any instrument and be proficient at it in no time.

I have no reason to doubt this is true after watching Cimino, who happens to be the youngest member of the group, also play guitar and keyboard in the same set. I'm also told Sean Colby is "the Super Awesome Funky Flea Bass Player." It's great to see young people with such big personalities.

Drummer Greg MacFarlane is doing a fine job of carrying on a family legacy. I remember when his father, probably about the same age as Greg is now, played drums in a very popular local band, Psychedelic Test. I have been trying to reunite P-Test for a Spirit of the Eighties appearance for the past four years.

Unlike MacFarlane, Mike Sosnowski, the band's guitar player and manager, does not come from a musical family. A few years ago, while playing trombone for the school's music program, Sosnowski came across a Kay guitar in his attic.

Kay Musical Instrument Co. began its manufacturing operation in Chicago in 1931. They were known for quality instruments at a reasonable price. By the end of the 1930s, Kay was considered an electric guitar pioneer in the industry. Sosnowski found out his father's uncle had worked for Kay when the company closed in the 1960s, and gave the guitar to his young nephew as a gift. But his father never developed an interest and the instrument went unused for over 40 years.

Sosnowski started playing around with it and quickly found he had a much greater knack for the stringed instrument than he did for the brass horn he'd been playing. He started taking lessons from Joe Romeo at Lewiston Music. Romeo played in another popular alt-rock band, Clyde, along with Petrocelli. After several months of jamming, Sosnowski and Cimino decided to put a band together. The four high school freshmen played first at a middle school dance and, later, opening for Clyde.

Now, I am guessing their school dance experience was successful, or at least better received than The Spoons when that band played its first gig at a school dance. I haven't yet gotten to the part of the book where he explains what happened, but in the beginning of "SpoonFed," Gordon Deppe's story of his life with The Spoons, he claims that, after this first show, they were banned from performing at any area schools for many years.

In addition to being a high school senior, a repairman of instruments at Lewiston Music, and a musician and manager of No Vacancy, Sosnowski is also the drummer for The Slumpups.

Fellow Lew-Port seniors Chris Wright (rhythm guitar), Dave Siwinski (lead guitar/vocals) and Mountain Carroll (bass) haven't been playing together for quite as long as No Vacancy, but they are off to a great start. They played the Youngstown Street Dance as Straight Jacket last year. Last week was their first appearance as The Slumpups and they sold 50 tickets to the show. The Spirit of the Eighties is happy to have The Slumpups playing the festival at 4:30 p.m.

We've lost so many of our musical icons, and disturbing number of '80s graduates, as well. We call this " '80s Weekend" and it's more than a concert. It's a celebration of the music of our youth. It's a reunion of friends from the past, many of whom end up becoming great friends all over again after decades without contact. It's a multi-generational experience we can share with our parents and former teachers, as well as our children and their friends. It's an opportunity to spark or fuel a love for live music with the young people. And it's a chance to raise enough funds to keep the music going year after year.

Spirit of the Eighties organizers are still looking for volunteers of all ages to help out at this year's festival. Volunteers age 13 and over who are free of physical limitations are asked to contact this writer at [email protected] or send a message on Facebook for more information.

Next week, read about the special performance of Road Trip and the Discover Niagara Shuttle's extended service during the Lewiston Art Festival and Spirit of the Eighties music festival.

Spirit of the Eighties