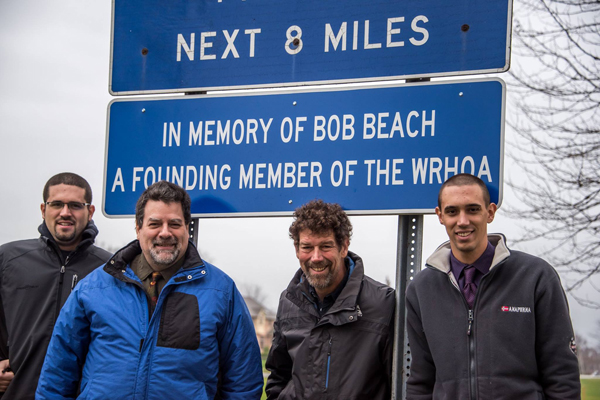 Signs honor the late Bob Beach on the Island's West River, near where he lived on West River Road. Pictured, from left, are Beach's grandson Robert Beach and his uncle Victor, Rob Beach and his son Jacob.

A picnic last Friday recalled an Island man whose leadership prompted his neighbors to permanently memorialize him along the West River Parkway.

Friends, family and motorcycle lovers gathered July 15 to remember the late Bob Beach, a longtime Grand Island resident and foundational member of the West River Homeowners Association. Six years after Beach died, the WRHOA worked to have a stretch of the West River Parkway dedicated in his honor and memory, and Friday, the Beach family held the first Bob Beach Memorial Picnic at the Whitehaven overlook to mark the honor.

Those who knew him called Bob Beach an entrepreneur, Air Force veteran, inventor, motorcyclist, and supporter of the West River Parkway. He owned five businesses, including one - Beach's Motorcycle Adventures - that is now run by the third generation of the family.

"He had a way of making almost everybody that he met and came in contact with feel like family," said his grandson, Jacob Beach.

Daughter-in-law Lillian Beach called Beach a well-rounded man and a go-getter. When Beach went overseas for a motorcycle tour with his wife, Elizabeth, in the 1970s, he got the special European vacation he wanted, but thought when he returned it could have been easier.

And sure enough, he did, dedicating himself to researching Europe, planning trips for motorcyclists, and helping them get their bikes overseas and back. The effort became Beach's Motorcycle Adventures, a family business, in 1972.

The signs have touched the family, and are something Bob Beach would have appreciated as well, his grandson said.

"We had a nice heartfelt family moment when we took a picture down by one of the signs," Jacob said. "It feels good to know that the legacy, I guess, is passed on to somebody else, that somebody else can see that."