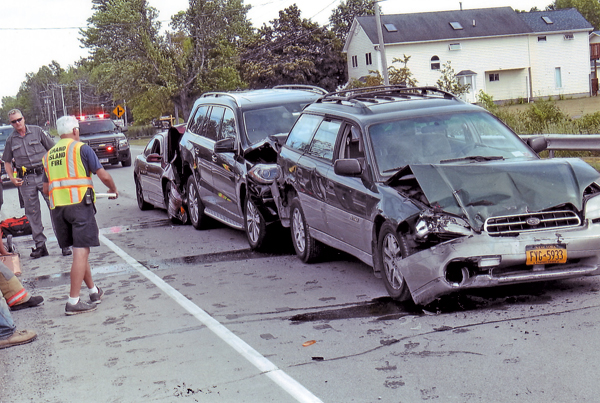 According to Grand Island Fire Chief Matt Osinski, firefighters and medics have experienced a continuing upsurge in the number of motor vehicle accidents they have had to contend with.

During the period of June 29 through July 16, 16 motor vehicle accidents have been handled, with considerable vehicle damage, but, fortunately, no critical injuries.

Since a previous report of July 13, there have been five additional motor vehicle accidents to date, as follows.

At 3:49 p.m. on Thursday, July 14, GIFC rescue personnel responded to a car in the ditch incident at 2994 Grand Island Blvd. The driver, 59-year-old Amy Heist of Grand Island, claimed no injuries, however, and declined treatment or hospitalization.

Subsequently, at 5:03 p.m. on Friday, July 15, a two-car motor vehicle accident occurred in the southbound lane of the I-190 near Whitehaven Road. Marshall Crane, 32, of Amherst claimed no injuries, but a 2-year-old child was transported by Twin City Ambulance to Women and Children's Hospital of Buffalo after evaluation and treatment by GIFC medics. A 3-year-old sustained no injuries. The other driver, Teresa Dillsworth of Tonawanda, claimed no injuries. Shortly thereafter, at 5:13 p.m., another two-car motor vehicle accident occurred on the Whitehaven Road overpass. Steve Braddock, 56, of Grand Island sustained a minor injury but declined hospitalization following an evaluation by the GIFC medics. The other driver was treated by TCA medics for not life-threatening injuries, according to Grand Island Fire Capt. Dan Mathes.

The next day, at 5:40 p.m., GIFC rescue personnel responded to a two-car motor vehicle accident in the southbound lane of the I-190 at the South Bridge. Deputy Fire Chief Chris Soluri stated that 55-year-old Wesley Miller of Grand Island claimed no injuries. The other driver, 25-year-old Kristen Millar of Grand Island, sustained minor injuries but declined hospitalization. Shortly thereafter, at 5:54 p.m., a bicyclist collided with a vehicle at the intersection of Bush Road and West River Parkway. Mike Chadwick, 55, of Grand Island sustained lower extremity injuries and was transported by TCA to Kenmore Mercy Hospital after EMS treatment by the GIFC. The driver of the auto, 55-year-old Maureen Schmitt of Williamsville, claimed no injuries. These simultaneous incidents were concluded by 6:17 p.m.

All GIFC units returned to service by 5:50 p.m. after fire police assisted the Erie County Sheriff's Office with traffic control during the removal of wrecked vehicles.

Shortly after midnight Wednesday, July 28, Grand Island Fire Co. rescue personnel responded to a West River Parkway motor vehicle accident involving a car off the road and in the water.

Fire Chief Matt Osinski reports that a vehicle traveling west on Love Road apparently hit a culvert, careened about 84 feet across West River Parkway, through shoreline trees, and into the Niagara River, where it flipped over on the passenger side in 1 to 2 feet of water. Grand Island firefighters Ben Shaw and Jourdan Benoit were in the vicinity and within minutes assisted both occupants in escaping the wreckage by breaking windows.

Shane Carroll, 22, and Tanner Atkinson, 20, both of Grand Island, were treated at the scene by Grand Island Fire Co. medics for minor injuries and transported by Twin City ambulance to Erie County Medical Center for follow-up medical attention.

All GIFC units returned to service by 1:04 a.m.