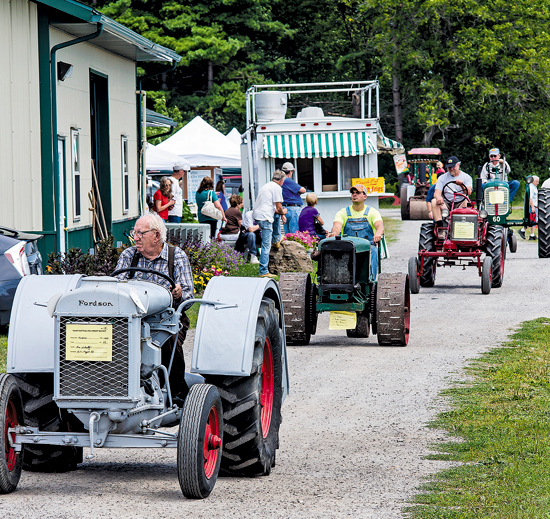 Presented by the Sanborn Area Historical Society, the event will feature a basket auction, craft show, bake sale, produce vendors, classic car cruise, native American river dancers, children's activities, music, food and, of course, its traditional tractor parades. Eventgoers can watch vintage tractors in action during two parades, one at 2 p.m. Saturday and the other at 1 p.m. Sunday. Children will get first dibs to lead the parades on their tractors, followed by local farmers.

"The tractor parade is kind of the highlight event," Sanborn-Lewiston Farm Museum Curator Bonnie Haskell said. "A lot of the farmers bring their antique tractors, because (after all) it is a museum festival. And then ... they'll light 'em up and take them for a parade ride. People love that." Afterwards, a vote will take place for the crowd's favorite tractor. Museum treasure and program and publicity chairman Glenn Wienke said, throughout the weekend, roughly 1,200 tractors will be on display and, overall, the event provides "a good education on tractors."

"We have some newer ones coming in also for show and let the kids climb on them," Wienke said. "Some of the old-time people love to see the old-time tractors. That brings back a lot of memories."

Speaking of memories, this year's festival will feature a celebration for the museum's 20th anniversary. A cake cutting will take place, along with an ice cream social. Buttons that read "Happy Anniversary" will also be handed out to visitors.

Also new this year are horse-drawn wagon rides offered both Saturday and Sunday and a visit from miniature ponies of the Little Bits Miniature Ponies Club from 10 a.m. to 4 p.m. Sunday.

"The ponies can be petted and will be doing tricks," Haskell said. A children's activities booth will also be set up nearby.

"Every year we like to try to incorporate a few new things," Haskell said. "We're always trying to improve ... the fact is now it's gotten so big that we don't have a lot of room to even add more activities. We're getting that tight now on our schedule. But the horses, we've been trying to get them for the past couple years. So, we're very pleased that we have them this year."

Visitors will also have an opportunity to learn about the Sanborn area's heritage by viewing the museum's exhibits.

The museum's campus is home to various buildings, including a historic barn, brought to the area by Wienke's grandfather in 1903.

Exhibits are full of everyday items of the past, including antique furniture, farm equipment, china, utensils and various other trinkets - not to mention a preserved two-headed calf.

"We're always willing to talk and showoff our stuff," Wienke said. He added the staff educates visitors, often children, on "the way life used to be" through tours and presentations.

Haskell said the festival helps raise awareness about local history, especially for those who "don't really know anything about farming and agriculture. It keeps that alive because that is our mainstay. And you would be surprised about how many children, when they come for tours of the museum, don't even know what a clothes pin is. Believe it or not, a lot of kids today do not have the slightest idea because they're of a generation of electronics. They can't even comprehend that in the old days you didn't have (electronics). ... It's interesting just to see the look on their faces."

Besides serving the public through education, the event also benefits the economy. As the president of the Sanborn Business Association, Haskell said the event "brings tourism to Sanborn. I mean, that is the big factor here. All of our businesses and antique shops are packed that weekend. People stop at all the antique shops and they shop ... just like they did for Olde Sanborn Days. It's our contribution to tourism for us for the year."

All in all, the event serves as "a community affair," Wienke said. It also emphasizes the agricultural museum part of it and what the farm stood for (and) that we try to push in the county.

Wienke said hopes the event will "bring people together. It educates people - that's what it's all about. ... And, at the same time, supports us so that we can continue and not have to stop." He added, "It's our biggest fundraiser. ... If we don't have the funds, we can't continue, we can't exist."

Admission is free for the festival. Proceeds from the basket auction will go toward maintaining the museum, as well its future projects, including restoring a former 1840s Mennonite church that has most recently been used by the Sanborn American Legion Post No. 969 on Pearl Street. The historical society recently moved the building to its museum's campus.

"We're going to build the entrance out again, put a steeple on it and make it look like a Mennonite church," Wienke said. "And the back part (of the church) will become a memorabilia (exhibit) for the legion members. We have a lot of memorabilia for the legion."

Anyone who wishes to donate a basket for the event can bring them to the museum on the Friday or Saturday before the event.