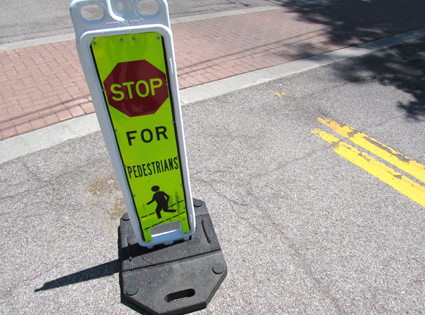 Village of Lewiston Mayor Terry Collesano announced the New York State Department of Transportation will improve the visibility of Center Street crosswalks in an effort to bolster pedestrian safety.

In a July 12 letter, read aloud by Collesano at Monday's Village Board meeting, DOT Regional Traffic Engineer Thomas S. Messana, P.E., wrote, "We have completed our review of the pedestrian crosswalks on Route 18F (Center Street) in the Village of Lewiston. ...

"As a result of our review, and in conjunction with the New York State Pedestrian Safety Plan, we have determined that we will replace all the existing pedestrian warning signs with new fluorescent yellow/green signs, as well as install a second fluorescent yellow/green pedestrian sign at each location for the left side of the roadway. We will also install advance pedestrian warning signs with a subpanel reading 'Ahead' for each location.

"For the mid-block crossing in the vicinity of the Apple Granny Restaurant, we will install signs indicating 'Yield Here To Pedestrians,' with the corresponding pavement markings for both eastbound and westbound Center Street traffic. We will also install high-visibility crosswalks at all crosswalk locations.

"This work will be completed by our regional maintenance forces at their earliest opportunity as scheduling permits."

Collesano and Lewiston Police Department Chief Frank Previte have been pushing to increase awareness of crosswalks. By law, motorists are to yield to pedestrians in the crosswalk.

At the recommendation of New York State Sen. Rob Ortt, the Village of Lewiston Board unanimously approved a resolution to establish a speed limit of 25 miles per hour on Center Street (within municipal boundaries).

Collesano said, "This is a request that will go our state legislators. This does not necessarily mean that it's done. But it's showing them that we have an attempt to lower it to 25 miles per hour."

Trustees have been unable to persuade the DOT to lower the speed limit on the state roadway. Ortt said the Village Board could submit a speed limit change request to the New York State Legislature. That governmental body sets municipal speed limits.

The Town of Lewiston was set to pass a similar resolution in support of the village's petition.

The participants of a private wedding reception scheduled for Saturday night have entered into a contract with Skylighters of New York for a grand fireworks presentation. As a result, Fourth of July-style pyrotechnics will be launched into the sky above the plateau - and visible from all the normal July 4 viewing locations.

Though the reception is private, trustees encouraged residents to take advantage of the viewing opportunity.

Lewiston Police Department officers and volunteer firefighters will out in the village patrolling traffic, and fireworks setup, as they do on Independence Day.