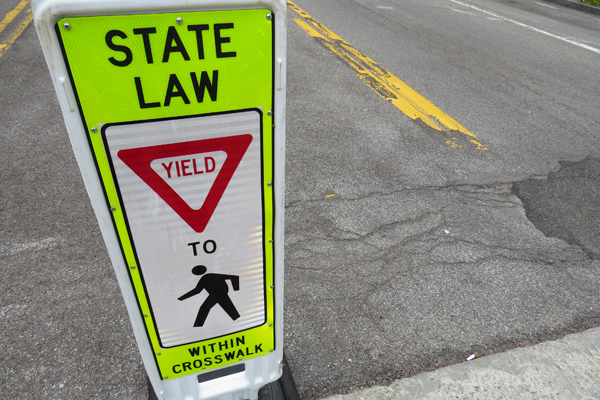 The Village of Lewiston prides itself on being a "walkable community." Its elected and appointed leaders work to make the municipality a safe place for residents and tourists to operate.

The actions of some motorists, however, have made that objective more difficult to achieve in recent years.

By law, traffic is required to stop for people in the crosswalk. However, there are some who still do not - or will not - yield the right of way to pedestrians at crosswalks.

This problem is especially prevalent on Center Street, where crosswalk signs are prominently posted. Motorists have not only barreled down the street with people in the crosswalk, they've also tried to pass stopped vehicles, making for what Lewiston Police Chief Frank Previte called a much more dangerous situation.

Village of Lewiston Mayor Terry Collesano said, "It is a walking community, and it's obvious if you just look out and see people walking up and down the street all day long, just about every day of the week, with their animals or by themselves. But, we have the crosswalks, and the crosswalks are very important. We've been trying to instill in the public that the pedestrians have the right of way when it comes to crosswalks."

Previte explained, "It's a violation of the law for (motorists) not to yield to a pedestrian in a crosswalk. The only exception to that that would apply to the village here is where there is a traffic-control device."

In the areas without a traffic light - just ahead of the Tops entrance;  Center Street at Eighth Street; Center and Seventh streets; in front of the Stone House (just past the Rite-Aid plaza exit); adjacent to the Spicey Pickle; in front of Apple Granny Restaurant; and at Center and Water streets - "It is the motorist's responsibility to yield to pedestrians when they are in the crosswalk," Previte said.

While those particular areas are marked, "The right of way extends for any traffic, any crosswalk, that does not have traffic control," Previte said.

With motorists inconsistently obeying the right of way law, Collesano said, "No matter how beautiful a car is when it's coming down the street, it's about a 3,000-plus-pound automobile - piece of machinery - which can maim or even kill. So, everybody has to be vigilant and observing what's transpiring when the traffic is flowing."

For motorists, Previte suggested driving at or below the 30-mph regulation. He said drivers should pay special attention to crosswalk areas and look to see if people are crossing or are about to cross. Approaching motorists should also keep two car lengths behind and understand why traffic is stopped at crosswalks locations (and not try to illegally pass on the sides).

"We've already had an incident where somebody has been killed, walking across the street in a crosswalk, and were struck by a motor vehicle," Previte explained. "That's unfortunate, because it shouldn't be the case."

While the onus is on the driver to yield to the walker, the walker still has to be mindful of the driver. Previte said, "The pedestrian cannot dart into traffic or run out into the crosswalk."

He suggested an oncoming traffic distance of at least one block. Short of that, do not cross.

"I think pedestrians have to assume, although they have the right of way, they can't assume that traffic is going to stop for them," Previte said.

"Not everybody sees that or might be aware of that (law/sign)," Previte said. "That's why we're trying to educate."

And for those who still refuse to obey the law, "It's something that we're going to be enforcing very strictly," Previte said. 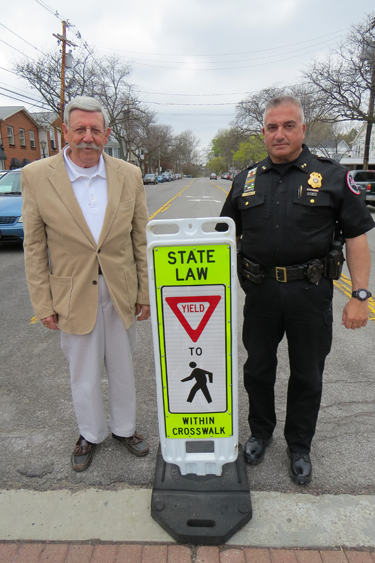