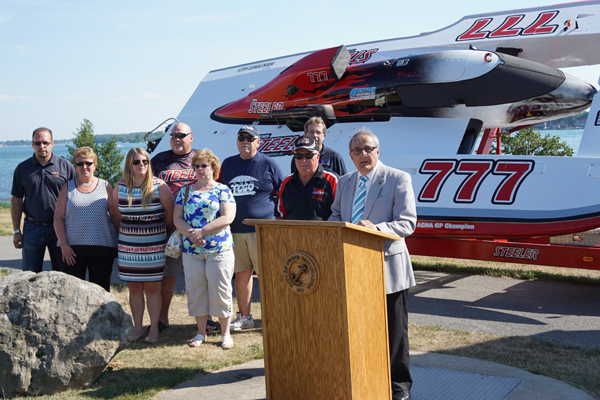 Thunder on the Niagara set for Aug. 6, 7

Thunder on the Niagara, the largest free motor sport event in the area, will return to the waters off North Tonawanda Aug. 6 and 7.

"We're very, very happy once again to announce that Snyder Industries will present the Thunder on the Niagara boat racing event as it celebrates its 11th year here at Gratwick Riverside Park," North Tonawanda Mayor Arthur said during a Tuesday afternoon press conference in the park.

"Snyder Industries will be the key sponsor for this year's event," Pappas said, "while the Niagara Frontier Boat Racing Association will be partnering with the Hydroplane Racing League, formally called the American Canadian Hydroplane Association. These organizations will have over 70 boat teams participating in the series event. That's right, over 70 of them, so this is really going to be great."

"If you have never seen it, you've got to come and see it," Pappas said.

The hydroplanes are high-performance boats that Pappas said "fly and thunder" over the water "at speeds up to 170 mph, if you can imagine that. It's just amazing to see."

Roesch said races in five classes of hydroplanes will compete.

Pappas said the attendance in the previous 10 years of the event has been pretty strong for what he dubbed "The Fastest Show on Water."

"The people come out," Pappas said. "They love it. You hear the sounds of these boats and you just see them glide across above the water at speeds of 100 miles an hour."

The boat pits, with cranes putting boats in and out of the water, will offer visitors a lot to see on shore.

Roesch thanked the city government and residents for the opportunity to use Gratwick Riverside Park in holding the events.

Gratwick Riverside Park is "a beautiful, beautiful site," Roesch said, adding that one of the big advantages of holding the races there is that, besides being a prime location to watch the boat races, the park provides plenty of room for other activities to take place within the park for the casual fans of the racing.

Spectators can watch from the water as well as from land, and anchor at either end of the course or traverse along the course itself, Roesch said.

Thunder on the Niagara 2016 will include new attractions.

•A car show hosted by Buffalo Motorama - with an anticipated 400 cars - will take place Saturday only.

•A skydive by members of Frontier Skydivers Inc. is scheduled for 2 p.m. Sunday

•Live band Kickstart Rumble will play after the end of the race on Saturday afternoon.

Roesch introduced Doug Capell of Snyder Industries, who said the company is "pleased to be back again this year as a major contributor to Thunder on the Niagara." This is the company's fourth year of major sponsorship of the event.

"We use this as one of our employee events," Capell said. "And I would have to say, between the two days, probably 100 percent or close to it of our employees come out and partake of the event. That's how popular it is for the community and just another sign of the popularity with our employees."

"It's great to be back and we look forward to another terrific weekend," Capell added.

As well as being a big draw to the city, the free event is also a fundraiser for a local organization.

"It does help our local economy, but in addition to that it helps organizations like the Twin City Community Outreach," Pappas said, noting that TCCO reaches out to both the City of North Tonawanda and the City of Tonawanda. Roesch said the event serves as the major fundraiser for Twin Cities Community Outreach, which uses proceeds from a $10 donation for parking.

Roseann Lureman, president, and Karl Bauer, board member, of TCCO said the entity is the umbrella organization of Twin City Meals on Wheels, the Interchurch Food Pantry and the Clothes Closet.

The nonprofit organization "welcomes the opportunity for the fourth year now to be participating in this," Bauer said.

Additional information can be found on Facebook at www.facebook.com/Thunderontheniagara2015. 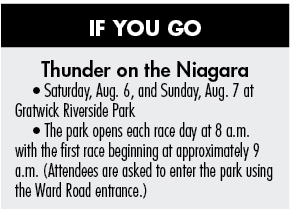